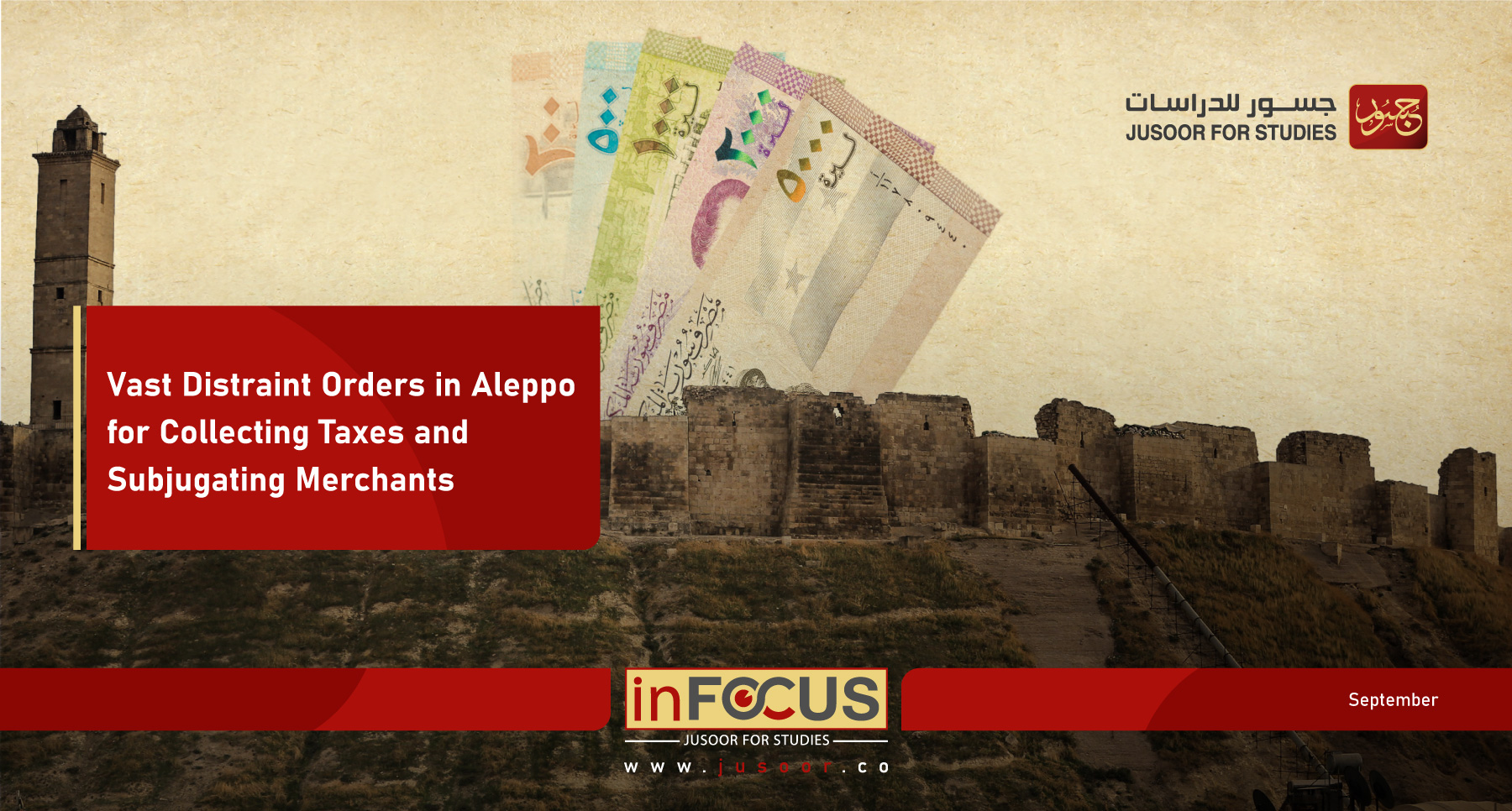 124
In Focus | Vast Distraint Orders in Aleppo for Collecting Taxes and Subjugating Merchants
The ministry of finance in the Syrian regime's government has recently issued warrants of distraint against the properties of about /650/ merchants working in the sectors of trading fuel and transport in Aleppo Governorate. Actually, this action comes in light of the continued policy of seizing funds is not only for extract revenues for the treasury of the Ministry of Finance in the regime's government, but also to serve deeper purposes related to the policy of managing authority and wealth in Syria, especially in Damascus and Aleppo.
Over the past years, the regime's security authorities have been concentrating on collecting funds and implementing many actions against the merchants, investors and rich men of Damascus, while the regime is working right now to generalize these economic and security policies to all governorates, especially Aleppo, which is subjected to something like a maximum pressure campaign.
It is likely that the focus is on Aleppo because of two main reasons:
1. The regime has plans to exploit Aleppo’s merchants to fill the deficits it suffers from, as the merchants of the governorate were able to quickly return to work despite their own facilities had almost completely destructed.  As a matter of fact, they take advantage of their presence in places close to opposition-controlled areas. This gives them an access to the missing materials in the Syrian regime-held areas markets, in addition to benefit from the goods and capabilities that the Syrian regime allocates to the governorate, like the fuel allocations, where the owners of transport companies benefited from these allocations, and obtained fuel even for the vehicles that stopped working, which enabled them to run larger trips and thus gain bigger profits.
2. The regime was keen to subjugate Aleppo’s traders and investors, who have very wide commercial relations and great financial capabilities, and to force them to follow its own security and economic system, especially those who complained about the role of some government entities, official security forces or non-governmental groups in placing impassable barriers in front of commerce and industry in Aleppo.
However, this campaign, although the largest, is not the first of its kind. The regime has recently launched several campaigns to pressure Aleppo's traders and investors, the most important of which are:
1. Campaigns to confiscate goods carried out by the regime’s Customs Service in early 2021, which escalated the anger of Aleppo’s merchants, after which a large number of them announced their cessation of business and they vowed to leave the country. Consequently, the campaign ended as the Customs Service invalidated the confiscation cases and announcing a list to organize their work in Aleppo.
2. A campaign launched by the security authorities in Damascus in August 2021 to summon a large number of Aleppo merchants and bargain with them to pay sums of money.
3. The regime has fined some Aleppo merchants with huge sums of money since mid-2021, among them, for example, the industrialist, Hisham Daghman, who was fined billions of liras - according to his statements. As a result, Daghman announced the cessation of his business activity, decided not paying the fine and began transferring his money and business to Egypt, as a considerable number of Aleppo industrialists and traders expressed their solidarity with him, but unfortunately, he passed away after three months, on August 28, 2021.
Obviously, the distraint order issued by the regime is based on a series of investigations and documents collected by the Central Agency for Oversight and Inspection of the Prime Ministry, and the apparatus submits its report to the Prime Minister, who in turn consults with the security branches to implement the seizure decision. The seizure can only be released by paying sums of money in the form of “reconciliation” with the Ministry of Finance.
Therefore, the distraint order has become one of the most important subjugation tools used by the security forces, in addition to the financial and economic partnership between the regime and the merchant class, investors, and even the wealthy officials.
Accordingly, the multiple distraint orders, which included six hundred and fifty people at once, have been recently issued, conveys a harsh message that says: it is necessary for the survival of any merchant to follow the regime's orders and to be engaged in its own economic system as well.
In fact, this is taking place simultaneously with the death of one of the industrialists who was fined, who decided to object to these arrangements by leaving Syria, but he did not live long to do so, of which the regime exploits in its harsh campaign, which is likely to continue against the merchants and investors in Syria in general and particularly in Aleppo.