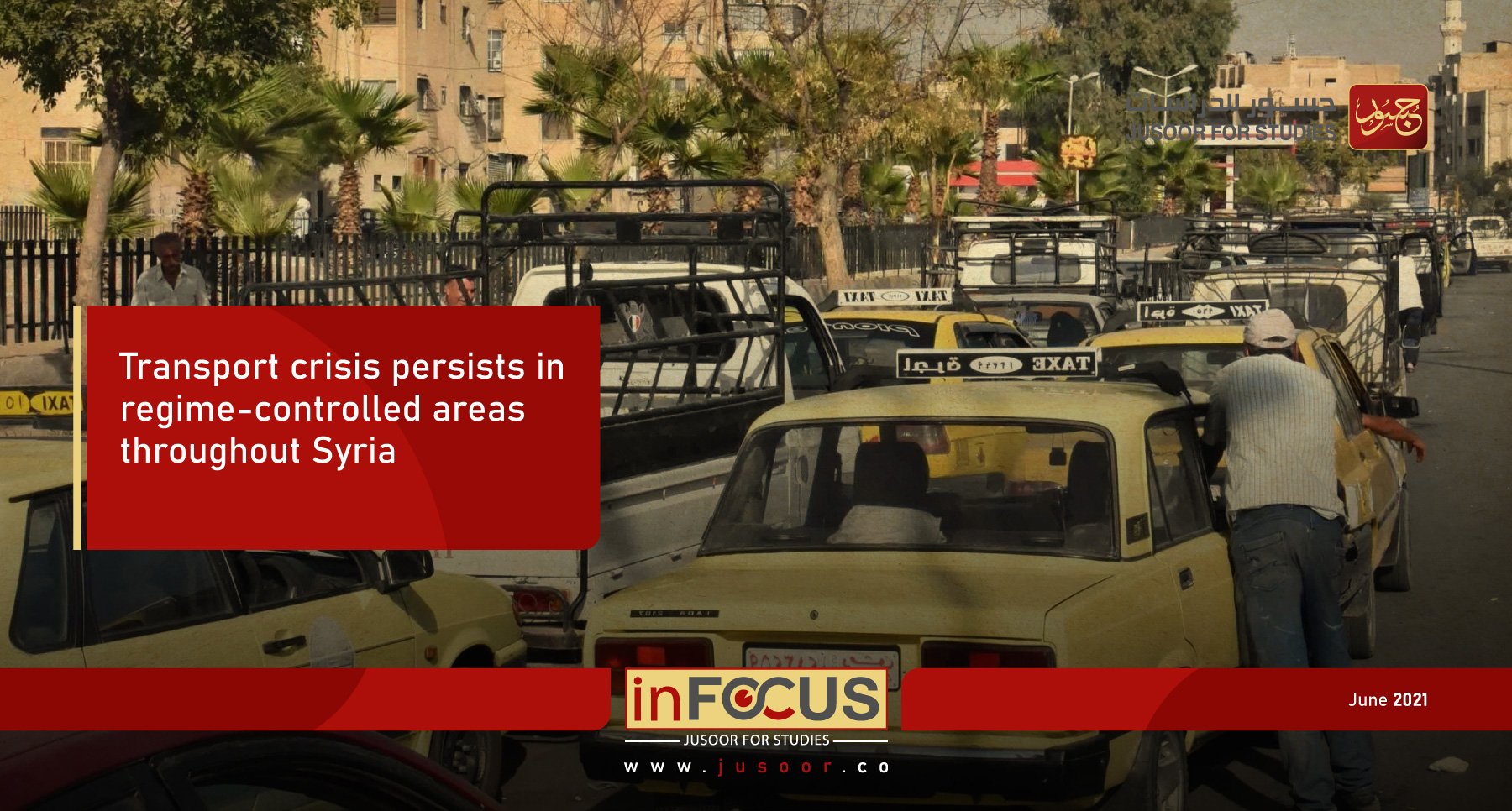 129
In Focus | Transport crisis persists in regime-controlled areas throughout Syria
Since last May, all regime-controlled areas have been experiencing a noticeable absence of means of the inland transportation, as school and universities students and government employees in these areas are struggling with a big-deal crisis because they are either unable to move or late for work or timetables, as a result of the lack of transport.
For a long time, the Syrian provinces under the control of the regime have witnessed a shortage in the number of buses, minibuses and vehicles needed to transport passengers, especially from the rural regions to the cities.
Moreover, the regime has issued statements stating that this crisis would be resolved if the government increased fuel amounts allocated to all provinces in quantities needed to feed the means of transportation.
In late April, the head of the Syrian regime issued Law No. 16 of 2021, permitting the owners of private cars and vehicles to transport passengers as taxies but more than a month after these measures, anyone could easily note the continuation of the transport crisis more than ever before, as:
• The almost complete absence of public transportation means like minibuses clearly appears on a wide number of transport routes that serve multiple areas, including but not limited to: suspension of transportation between Quneitra and Damascus, and there has been a severe shortage of means of transportation to and from the areas of Damascus countryside such as Qudsaya, while the owners of the busses and minibuses operating on the active routes charge higher fees than the specified ones.
• Besides, a large number of students have failed to attend lectures and some exam sessions in various governorates due to the lack of transportation means necessary to get them on time.
The main causes of the crisis are expected to be due to:
1. Not supplying public transport vehicles with enough quantities of filling fuel that are necessary for them to complete a sufficient number of each bus’s whole trips, which makes them operate with the minimum capacity, and dealing with all means of transport in one scale in terms of quantities without taking into account the distance that the vehicle travels daily.
2. Unfair fees imposed by the "public authority of inland transportation” on the owners of buses and means of transportation, which makes some drivers stop working and seek either to provide private transportation services outside their allocated lines or have temporary contracts.
3. Forcing a large number of public transportation means’ owners to transport individuals to the places of “public celebrations” of the presidential election, which lasted from the announcement of the results of polling, until the first third of June, without providing adequate compensations.
Anyway, the crisis might continue throughout June for the reasons mentioned above, as there is no hope that it would be resolved during the coming period for reasons relating to the lack of adequate quantities of fuel and re-directing most of the fuel allocations that reach Syria to the army and security forces.
Unit of Analysis and Thinking - Jusoor for Studies
To visit the English Telegram channel: Click here