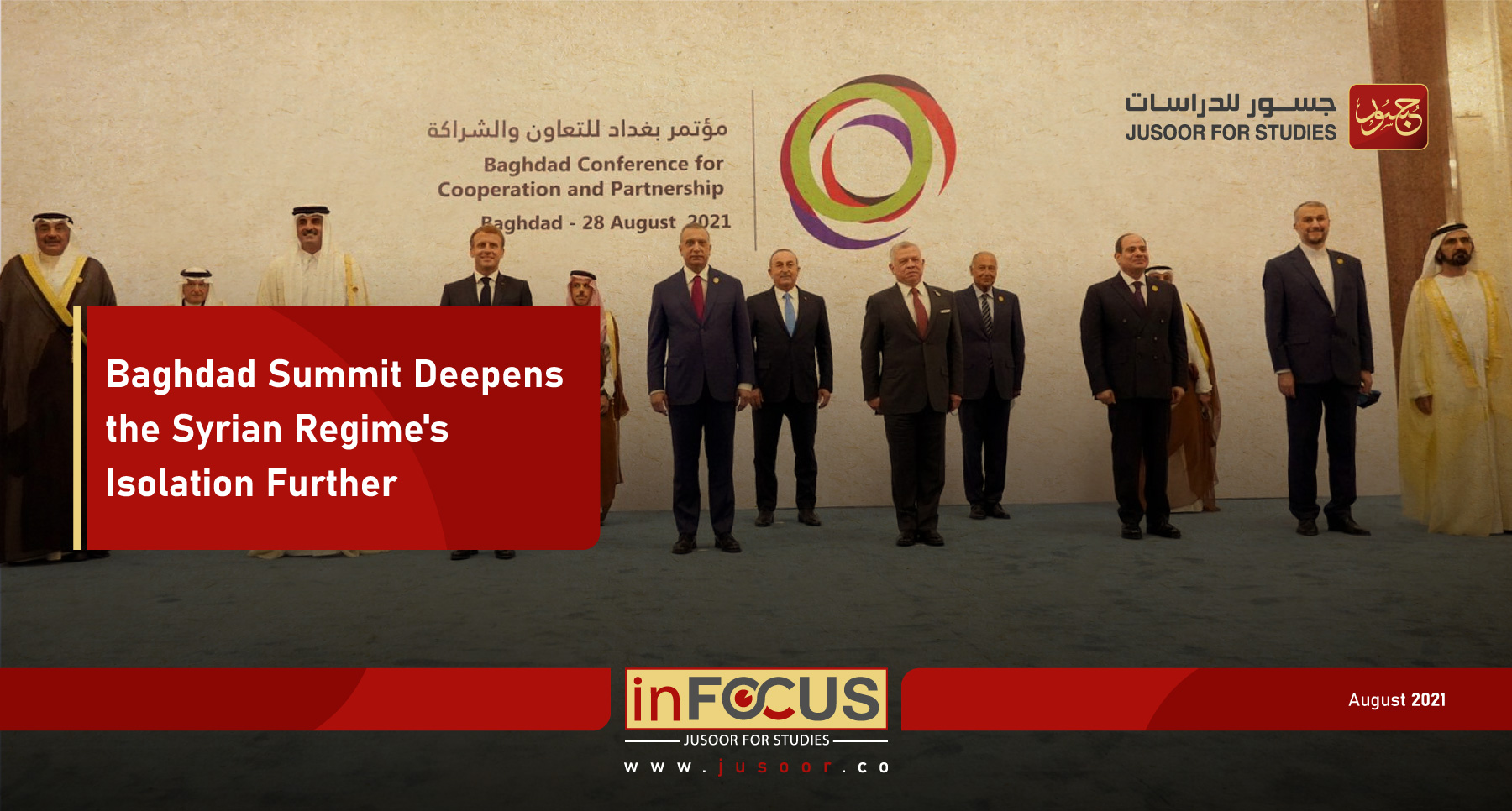 The Baghdad Summit, which was held on August 28, 2021, has marked a diplomatic and political breakthrough for the al-Kadhemi government, as it is the most important event hosted by Baghdad since the end of the eighties of the last century, where the summit enabled al-Kadhemi to invite the leaders of the region, as it brought together rivals and allies, which restored Iraq's effectiveness in the region, as a pivotal and influential actor.

On one hand, holding the meeting has been a prominent achievement for Baghdad but, on the other hand it represents a stigma for the Syrian regime, as it was the most important country in Iraqi neighborhood that was absent. Indeed, Syria is the only neighboring country that was not invited to the summit, despite all the attempts made by Iran and its proxies inside Iraq to make the regime attend. Falih Al Fayyadh, the chairman of the Iraqi government-sanctioned Popular Mobilization Forces visited Damascus, and pro-Iranian axis media outlets talked about a message conveyed by the latter from Prime Minister Mustafa Al Kadhimi about the summit, before the Iraqi Foreign Ministry denied such reports.

The Syrian regime's non-attendance, no matter whether was not invited or it intended not attend, shows that it is too early to talk about the end of the diplomatic siege been imposed on the regime. Actually, the summit was held in a country seen as an ally of the Iranian axis, where Iraq refused or abstained from voting on all Arab resolutions condemning the regime in Syria over the past ten years. Iran enjoys great influence in Baghdad, surpassed only by its influence in Beirut, which means that even with such an influence, the regime's allies were not able to send it an invitation, or give it an opportunity to ask for an excuse for not attending the Conference officially.

This very summit has reflected the bitter reality the Syrian regime experiences, it is isolated from its surroundings, and that the efforts of Arab and non-Arab actors in recent years to rehabilitate it have not worked, and will not lead to any results without reaching an international political solution, which means that the regime and its allies must make real concessions, and this will be applicable only if the balance of power is realigned after it had its current shape, thanks to the intense airstrikes and toxic gases!

Being not attending shows that the Iranian influence that it had tried to build in Iraq over the past eighteen years did not enable it to control over the Iraqi decision-making process. Obviously, Iran did was not able to impose its agendas on regional and international actors, which emphases that establishing armed militias are not enough to win wars, let alone winning small battles.

It is a lesson that Iran should realize in Syria, which says that the more your allies are isolated, the more you will be isolated too. Despite both Iran and its proxies fought alongside the regime against its people, but in fact it means further isolation for Iran's policies and projects.