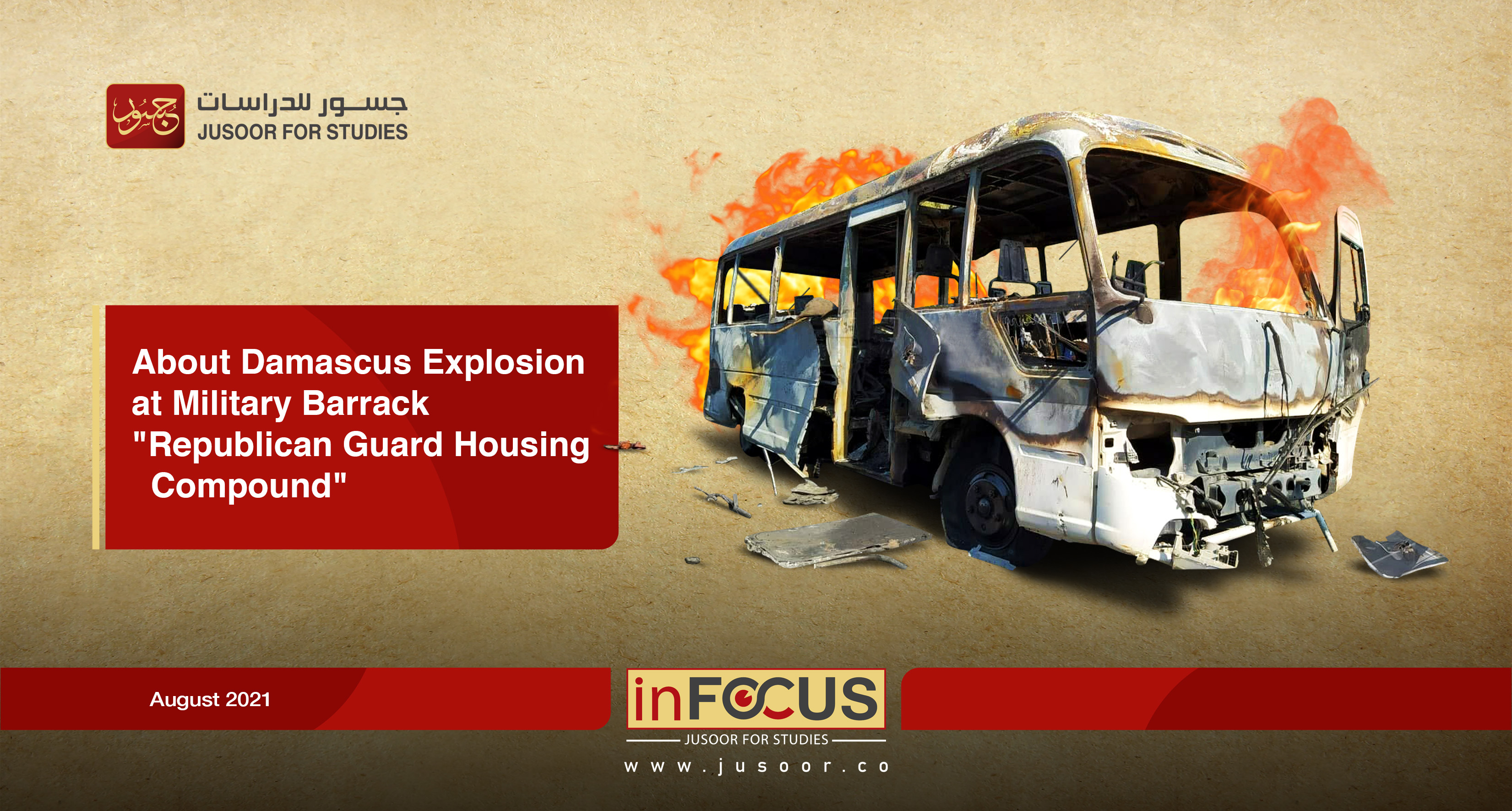 115
In Focus | About Damascus Explosion at Military Barrack "Republican Guard Housing Compound"
On August 4, 2021, the Syrian regime's media outlet, "SANA" reported the explosion of a military overnight bus in the capital, Damascus, attributing the causes thereof to a "short circuit that led to the bus’ gas tank blowing up, confirming that only the bus driver had been killed, with some members injured."
Undoubtedly, it is considered a critical explosion because it took place at the entrance of military barracks on the western edge of the Syrian capital, Damascus, which is a safe military barrack inhabited by Republican Guard Division's officers, one of the most key formations that the Syrian regime relies on to protect its pillars, and the region is usually a closed security area.
The Syrian al-Qaeda affiliate Hurras al-Din claimed responsibility for the bombing, confirming the killing of at least 19 military officers of the Syrian regime.
However, the narrative of the “short circuit” seems illogical, particularly since the Syrian regime’s media previously used to attribute previous explosions occurred as a result of Israeli air strikes to the same alleged reason. In addition, it is not likely that “Hurras al-Din” actually carried out such an attack, because it is clear that the regime-run media outlets would immediately make advantage of such events. One can never rule out, on the other hand, the matter of intra-regime rivalry, as a military establishment itself.
The possible repercussions of the incident on the various parties can be reviewed through the following points:
1- Whether the operation was carried out by organizations hostile to the Syrian regime, or it resulted from a conflict within its wings, it reflects the vulnerability of regime security, especially as it took place in a spot considered as a safe place housing the officers of the regime's major military division, which is the Republican Guard.
2- Seizing control of a large geographic area by the Syrian regime does not necessarily mean that the country is completely in its own grip. The parties opposed to the Syrian regime may turn to the “guerrilla warfare” as an alternative model to open and comprehensive confrontation.
3- This type of operation may contribute to increasing criticism of the Syrian regime from its popular base, which has recently escalated against the background of the poor service and hard economic conditions, as the regime was justifying the failure in services and the decline in economic indicators that it was working to restore peace and security, but under such events, it will show its true colors before the popular base, that it is unable to provide security, economic needs or services throughout the country.
4- Contrary to the above, the Syrian regime will have a golden opportunity to make advantage of the incident in order to mobilize the loyal factions and militias and the pro military leaders to rally around it once again to confront the existential danger, and it will also benefit from this matter before the international bodies in justifying the continuation of its security and military operations in various regions, including Daraa, under the pretext of " combating al-Qaeda."
5- It is likely that the explosion of the “Republican Guard housing compound” will contribute to increasing the popular support in favor of “Hurras al-Din”, because it came in conjunction with the field escalation in Daraa beside accusations of the Syrian opposition factions because they had committed to international understandings and they had failed to move to help the fighters of Daraa governorate or pressure Russia should discourage it from military operations. Ultimately, this very operation will present "Hurras al-Din" to some segments of the society as an independent faction has nothing to do with the international decisions.