Wheat of Syria: Fraught with potential conflict as the start of the harvest season approaches 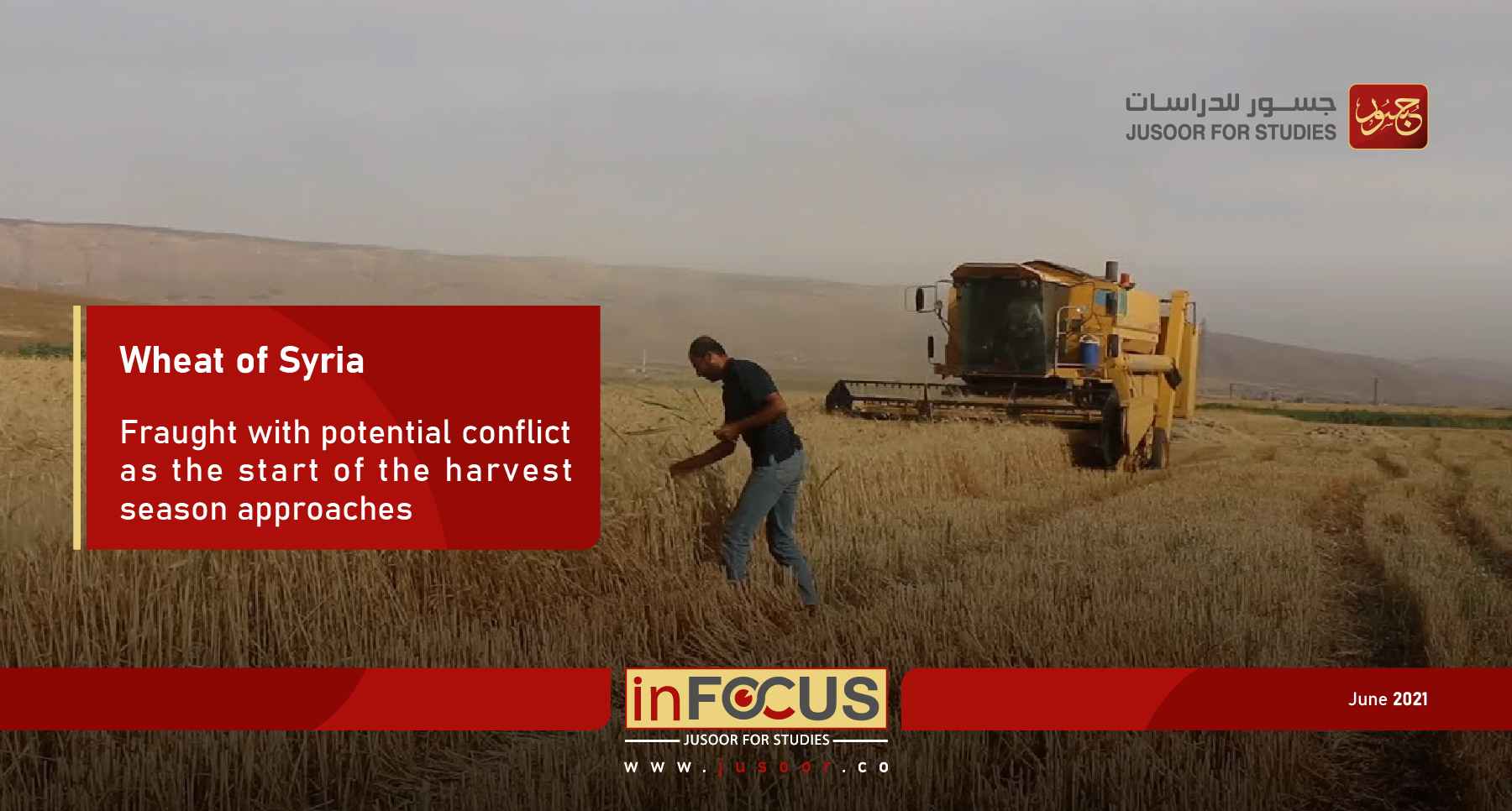 Wheat of Syria: Fraught with potential conflict as the start of the harvest season approaches

In Focus | Wheat of Syria

In mid-March, the Syrian regime's government set the price of a kilo of wheat at 900 SYP, after the official price was 800 SYP in the previous harvest season, but currently the Syrian regime gives premiums for early deliveries above fixed delivery quotas for each ton with greater margin to negotiate the final value of the premiums for early deliveries.

In mid-May, the Autonomous Administration (A.A.) set the price of wheat purchased directly from farmers at 1,150 SYP. for per kilo, while the Syrian Interim Government delayed to announce its ability to purchase a kilo at around 1,000 SYP until early June, but it will pay in US Dollar for each ton, which is a comparative advantage than the rest of the interested parties wishing to purchase.

It is likely that the current need of the population in Syria is about two million tons of wheat for this year. Where the Syrian opposition-controlled areas need about half a million tons of wheat annually, while its production for this season is estimated at only about 150,000 tons, while it is believed that there are other undeclared quantities in the Salvation Government’s areas of control in northwestern Syria as well, but they may not exceed about 35,000 tons of wheat for the current harvest season.

The northeastern regions of Syria also need about 300,000 tons of wheat annually, and their production for this year is estimated at about 600,000 tons, due to water scarcity and the high cost of production requirements and other factors that have negatively affected the current season’s production. It is also expected that there are quantities that will not be declared due to reasons related to the farmers or the parties contracting with them those who plan to sell them on the black market. The regions of northeastern Syria are the most abundant in grain production in Syria.

At the very least, the Syrian regime-controlled need for wheat is estimated at 1.2 million tons for this year, and it is expected that the current year’s production over there will not exceed 200,000 tons, and therefore we find that its deficit may reach one million tons of wheat for this harvest season.

The Syrian regime has set the price of 900 SYP per kilo as a benchmark price, as the rest of the parties have priced according to it, but the global price of a kilo is currently more than 2000 SYP, which encourages the various parties to sell outside Syria, which consequently leads to an increasing gap and creating a black market for competition between the different parties.

The Syrian regime strives to pressure the rest of the parties by targeting the areas of wheat cultivation in the opposition-held areas, as the former also targeted the areas of cultivation in the “Al-Ghab Plain” at the end of May, which led to widespread fires torched the corps, and the Syrian Civil Defense announced that it had monitored 13 fires in days in the areas of wheat cultivation. The Syrian regime also opened a new silo in the "Dibsi Afnan" area in the "Tabqa" countryside area near the "Shuaib Al Dhikr crossing", in order to encourage smuggling operations from northeastern Syria and to get deliveries through these silos.

The Syrian regime might face a greater bread crisis than the previous predicament of the last season, due to the high gaps of needs and the increasing of the international price of wheat, which makes it more difficult to import. On the other hand, the opposition regions can rely on importing wheat through Turkey, and this is what humanitarian organizations and local councils usually do.

It is also expected that the Autonomous Administration will accomplish better resources as a result of selling surplus wheat at higher prices, which will reflect well on its own resources.