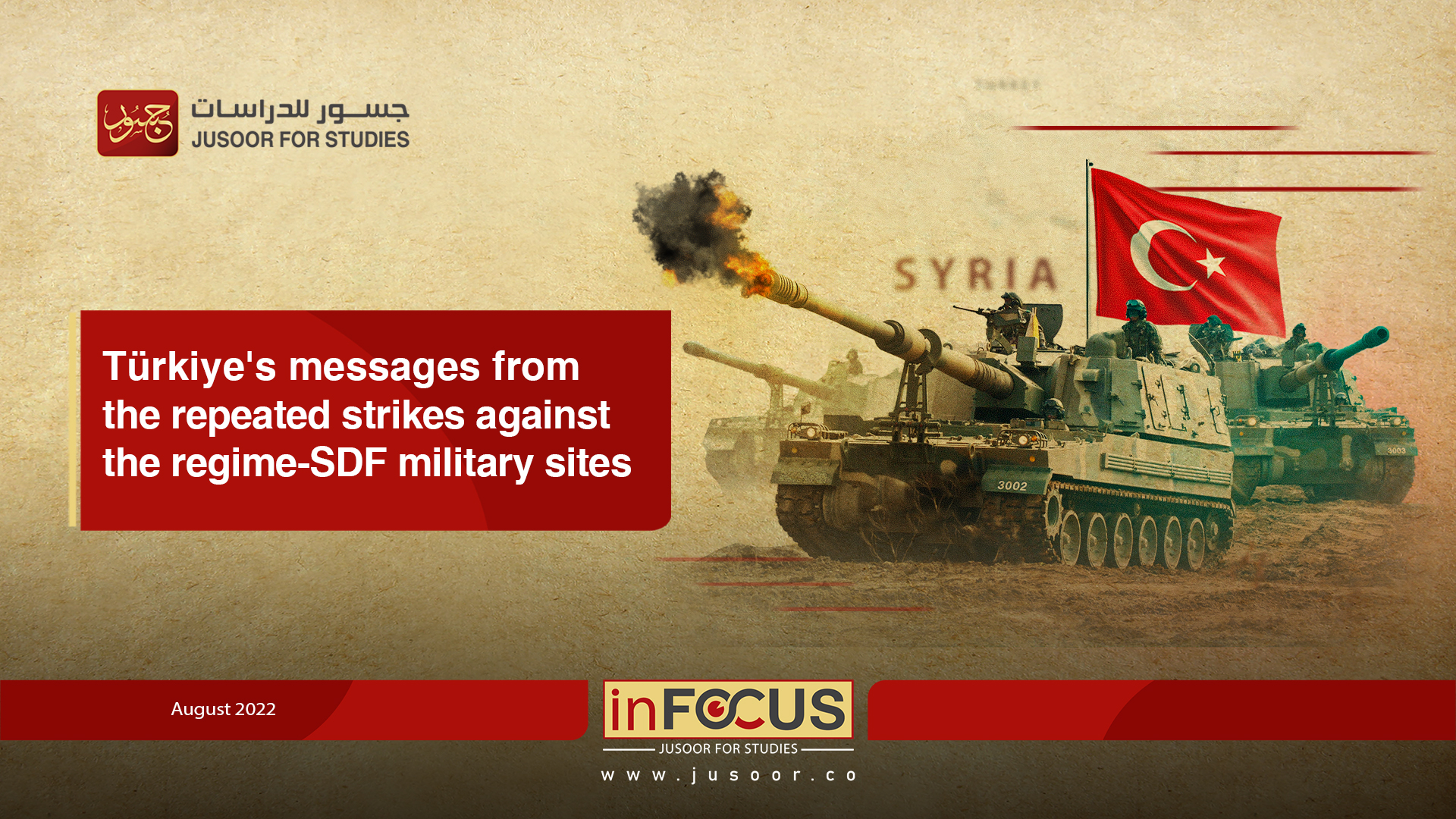 184
Türkiye's messages from the repeated strikes against the regime-SDF military sites
Since the beginning of August 2022, the areas controlled by the Syrian Democratic Forces (SDF) east and west of the Euphrates have witnessed an unprecedented military escalation by Türkiye. This includes aerial bombardment by drones, artillery shelling, launching missiles and machine gun bombardment to target military points belonging to the SDF, the Kurdistan Workers Party (PKK) and the Syrian regime alike.

It is noted that the recent escalation focused mostly on the military points run jointly by the SDF and the regime forces in Amuda and Tal Rifaat. The outposts of the regime forces, especially those locate near the “Syrian-Turkish” border area, east of the Euphrates, which were deployed under the Sochi Memorandum (2019), were also targeted by the Turkish strikes.

In an unprecedented bombing campaign, on August 16, the Turkish warplanes bombed the largest points of concentration of the regime forces in the Jarqali hill west of Ain al-Arab. This attack led to the killing of 16 soldiers of the Syrian regime, which acknowledged that only 3 members of its own forces were killed. Three days later, the regime responded by targeting a marketplace in Al-Bab city, east of Aleppo, killing and wounding more than 60 civilians.
It seems that Turkey wants to send several messages via this field escalation against the positions of the regime forces that are deployed within the SDF-controlled areas, especially since this escalation coincides with ongoing talks, held between Türkiye and the regime that were previously announced by the former's FM, Mevlüt Çavuşoğlu. These messages are:
• Rejecting the current mechanism for implementing some of the provisions of the Sochi Memorandum (2019) regarding the role of the regime-SDF joint military points, especially that these points have been used several times to strike Turkish military and civilian targets outside and inside its territories. This will be added to the possibility of developing bilateral coordination between the two parties, such as the case of the so-called ‘North Thunderbolt’, which is an operations room, was established at the end of May in the Tal Rifaat area with the aim of removing Türkiye from the areas of northern Aleppo.
• It is a kind of practical reflection on the ground by Türkiye, because it did not accept the current mediation carried out by Russia, which was supposed to ensure the withdrawal of the PKK elements and its Syrian branch (YPG) 30 kilometers to the south of the Turkish border.
• A practical reaction that determines Turkey’s basic limitations and conditions regarding the nature of any possible cooperation with the regime, which will be based on the Turkish position refusing to withdraw from northern Syria without guaranteeing the establishment of a safe zone. Taking a role in combating terrorism is, in fact, another guarantee that Türkiye wishes to have in any potential coordination; given that it does not trust the regime's efforts in this regard.
• To emphasize that any process of political openness that Turkey would begin with the regime does not mean that the former is ready to give up any of its strategic goals in Syria under any pressure.
In general, the messages are conveyed through the Turkish field escalation against the regime forces do not necessarily mean that the ongoing negotiations between the two sides, mediated by Russia and Iran, have come to an end, despite the fact that this escalation might impede achieving progress in the aforementioned negotiations; especially Türkiye insists on launching  military attacks against the PKK sites in the region and also against the regime forces' ones in the event that the latter provides support to the PKK in carrying out its activities.