The Syrian Regime Response to the Corona Pandemic.. A New Opportunity for Tyranny 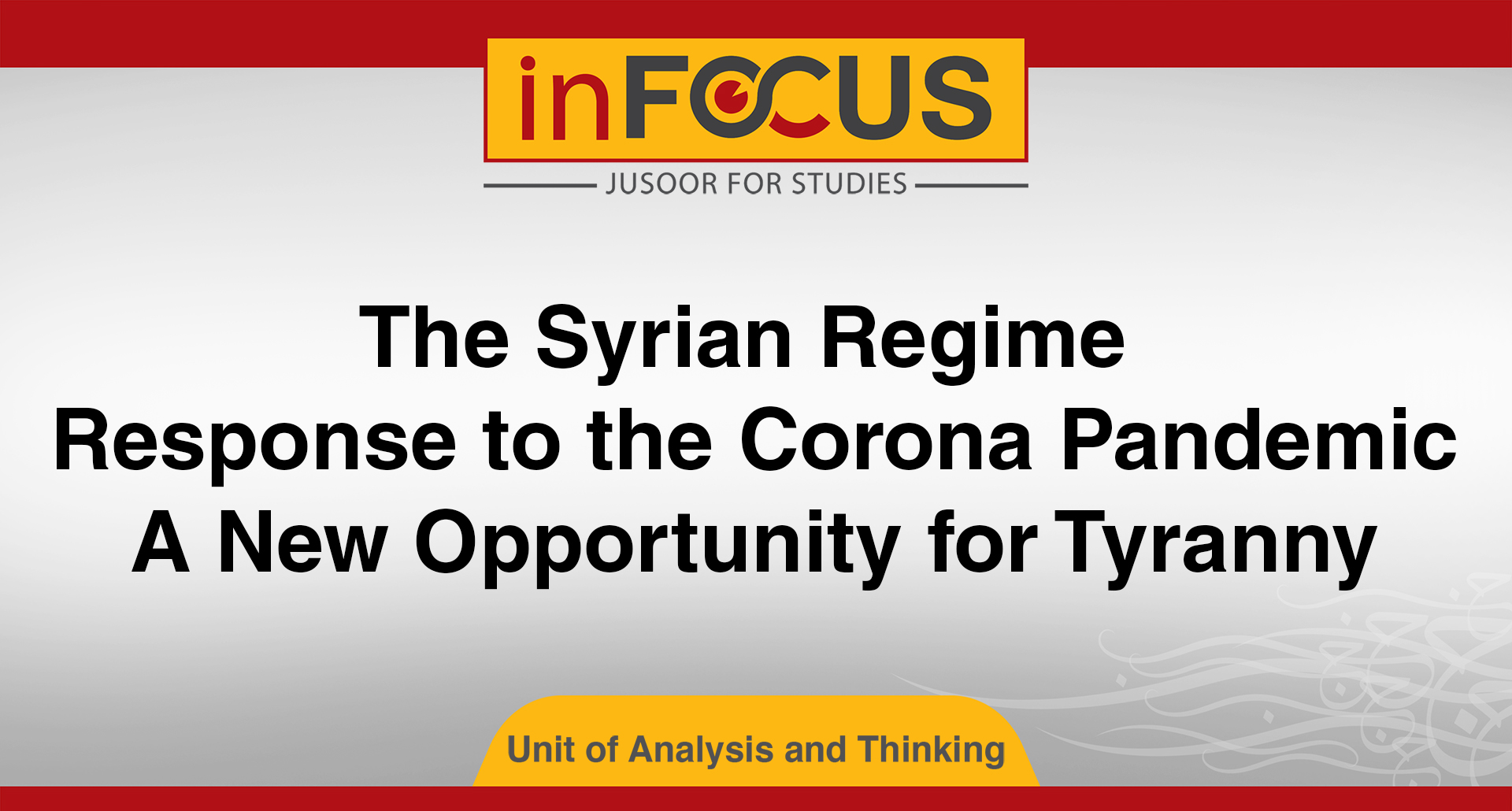 The Syrian Regime Response to the Corona Pandemic.. A New Opportunity for Tyranny

120
The Syrian Regime Response to the Corona Pandemic: A New Opportunity for Tyranny
On March 22, 2020, the Syrian regime announced the first recorded case of Corona virus breaking its long-standing silence on the issue. By March 30, the number of recorded cases increased to 10 and so far, two patients have died because of the virus.
According to multiple sources the number of unrecorded cases is in the hundreds, but proving this information is almost impossible given the general environment and lack of media freedom and security pressures on the health system. This means it is impossible to conduct small or large-scale testing in Syria.
Since March 14, the Syrian regime has issued a number of measures aimed at reducing the spread of the Corona virus, the most important of which are:
• Suspending public and private schools
• Postponing the Syrian People Assembly elections to May 20 and suspending any sessions until further notice.
• Imposing measures to reduce gatherings and crowds, and to close unnecessary shops.
• Imposing a partial curfew from 6:00 pm until 6:00 am.
• Closing all border crossing points with Turkey and Lebanon.
• Stopping internal transportation between and within governorates.
• Suspending flights from outside Syria and placing foreign citizens coming from outside Syria to a 14-day quarantine.
The Syrian regime’s measures to combat the Corona virus can be described as radical and violent in addition to the lack of transparency of its implemented policies. The measures reflect the relationship between the regime and citizens, especially the regime’s lack of consideration for the dangers that the population might suffer unless it directly affects regime interests.
The Syrian regime’s latest measures are linked to several threats that may affect it due to the economic crisis and the sanctions, and the most important of these challenges are:
• The weakness of the public and private health sector, which is a long-standing weakness dating to before 2011, and which has increased significantly since then.
• The exhaustion of the military and security sectors which are the main guarantors for the continued domination of the Syrian regime. Due to the risk of the virus spreading among the ranks of the armed forces and foreign militias, and the medical sector’s inability to provide for and absorb the needs of the military sector during and after combat operations.
• The economy is close to collapsing and the current conditions require the freezing of internal and external commercial traffic, especially with the USA implementing Caesar's law soon.
• Postponing the parliamentary and presidential elections in the event the pandemic continues for more than a year, which would further destabilize the Syrian regime’s attempts to gradually re-install the political system through military and diplomatic activities led by Russia and Iran.
• Russia and Iran freezing or reducing military and logistical support to the Syrian regime by with the possibility that hostiles will resume against the Syrian opposition and its allies.
To visit the English Telegram channel: Click here