The Policy of Imposing Stability Through Russia's Excessive Power 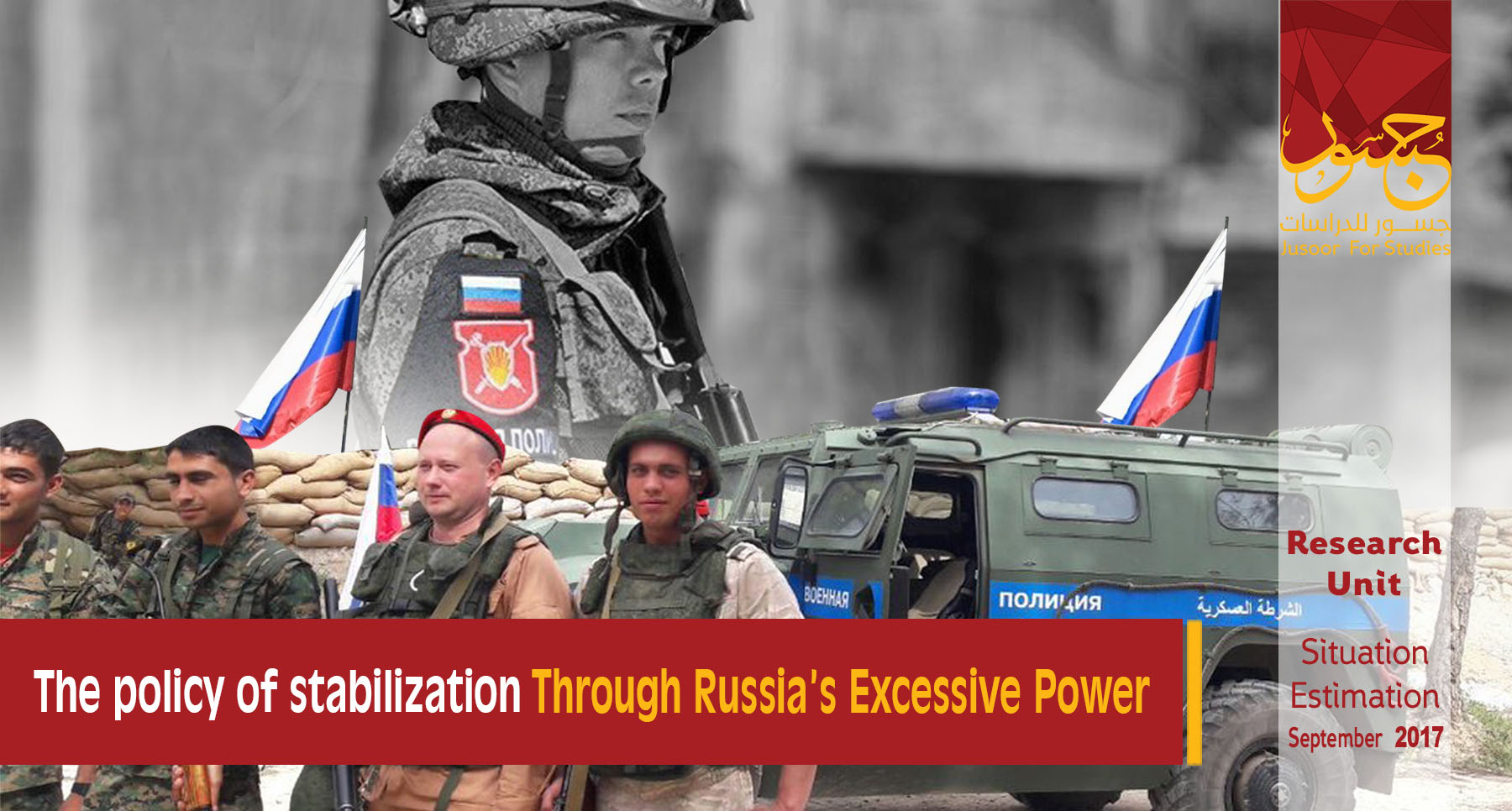 The Policy of Imposing Stability Through Russia's Excessive Power

Preface
Russia’s intervention in Syria is part of its strategy to reaffirm its role as global power that cannot be ignored or undermined.   It cannot accept a defeat in Syria as a result of the collapse of the Syrian regime. However at the same time Russia realizes that it cannot achieve total victory and therefore it has to secure what we may call a “half victory”.
Since it intervention in 2015 Russia has become the main actor in Syria, sidelining Iran’s role in the pro-Assad camp.  Moreover, Russia has managed to neutralize the other actor’s challenging the Syrian regime, whether at the international, regional or even at the local level.
In addition to dealing with actors opposed to the Syrian regime, Russia has been involved a long-term process of restructuring the regime so it can be capable of adopting  the form of political solution proposed by Moscow.     Political and social changes were imposed by Russia in the regions controlled by the Syrian regime  as a reminder to the  locals of the  Russian presence!
Since the beginning of Russia’s intervention, the sequence of events shows Russia's ability to break down the political equation and rearrange the parts of a dissembled picture. Russia proved that using  excessive force was part of an integrated political vision, seeking to accomplish what Iran and the Syrian regime could not achieve in the past four years.  This report tries to analyze the Russian strategy in Syria up until the present day and seeks to explain the Russian vision and the  moment, and the future of its presence in Syria.

How did the Russian Intervention develop?
In October 2015, the Russian airstrikes in Syria  had a great impact  on the course of battles on the ground, which led to ending battles neither Al Assad forces nor the Iranian militias were able to win  Obliging Bashar Al Assad was forced to thank Putin for the effective Russian intervention in finishing  difficult battles in Syria .In the end of November and beginning of December 2015, there had been reports that  Russian military units were operating on the ground supported by very modern Tanks (T-90).
In January 2016 Al-Assad’s forces backed by Iranian militias were able to recapture strategic areas near Lattakia city after support from the Russian air force .
On 14/3/2016, the Russian president declared the withdrawal of a substantial number of Russian forces from Syria ; however, this announcement did not reflect the reality on the ground, where Russian forces were intensifying their military operations. It is worth mentioning that Russian air strikes in Aleppo led to the withdrawal of the armed opposition from the eastern neighborhoods of the city.     .
The presence of Russia’s military forces is mainly in Shayrat, Palmyra and Hama’s military air bases.  . The estimated number of Russian soldiers in Syria is 4500 in addition to a military police battalion in Aleppo consisting of 1600 soldiers.
Russia has two main military bases in Syria; the first one is a naval base in Tartus which comprises  of 11 battleships and an S-300 anti-missile system. The other base is Khmeimim air base in Lattakia Governorate where    Russian Sukhoi air crafts are kept.

What are Russia's Objectives in Syria?
Russia is the most effective and influential country on the ground, and has been able to affect significant changes on the battlefield. It has also been able to impose the options that it wants.
In theory, no party seeks or is capable of removing Russia   from the Syrian conflict, which means it will remain  the main actor for a long period. Even the American administration  shows no  will to confront Russia because it views Russia actions in Syria in positive way.
The political realities show that, Russia is not holding on to  Bashar Al Assad, while Russian officials insist on rejecting to deal with Assad in their Assad in their closed meetings.  They view Bashar Al Assad as low priority for Moscow. However, Russia seeks to maintain a strong regime in Damascus that can preserve the Russian interests in the long term.
Russia realizes that preserving Syria means the participation of a great number of actors including Al Assad's opponents who do not consider changing the form of the Syrian State. Moscow also seeks to neutralize any actors which reject the political solution and thus seeks to establish a hybrid regime in the future.
Russia  wants  to constrain the Iranian influence in Syria, by bringing the Iranian forces back to Iran. However, this objective is related to a clear and concrete plan from the American side, in which Moscow will play an important role in restructuring Iran’s role as a regional power without posing a threat in the region.    Russia does not want to lose the influence it has over Iran and therefore the presence of Iran as a regional power is important for Moscow.
Curtailing the Iranian role means limiting Hezbollah’s military and political influence in Lebanon and the region, which Russia is doing by keeping it ties with the group to a minimum.
Russia seeks  to control the Lebanese arena in order to curb the influence of any possible party opposing  Moscow    The regions stability is  important  for the success of its new model in the region.
After analyzing the Russian position towards the Syrian crisis, and what has led Russia to take the decision to intervene   military in Syria we arrive at a clear strategy that seeks to break the strategic stalemate.
This is the main reason behind the Europe’s dominance over Moscow o concerning many regional and global issues, which has limited and constrained Russia’s global authority.
The strategic objective of Russia's position towards  the Syrian conflict including its military intervention is to break this stalemate by any means necessary, as Russia was forced to choose one of two tough options as follows:
-  A full scale Russian military intervention in Syria, which could bring back sorrowful memories from its defeat in Afghanistan. However, this gives Russia the potential to become the main actor in Syria.
- maintaining the political and economic support to Syria without any direct intervention, which removes Russia from being a prominent actor in the Middle East. This scenario would make Russia lose a valuable chance of being a permanent actor in the Middle East which will limit its international influence in the region.
After the fall of some allies like Saddam Hussein and Muammar Gaddafi, Russia chose to intervene in Syria to achieve its strategic objectives, maintaining Syria as a unified and secular country, and protecting the Syrian regime from any imminent breakdown. Moscow proved its ability to break the security umbrella of the U.S through the Russian military power. The Russian intervention in Syria is a message from Putin to the world that, Russia has the military power which the international community should take into consideration. The usage of very advanced Russian weapons in Syria is a promotion for the Russian military production.
Furthermore, the Russian intervention in Syria helped in raising the popularity of Putin internally and distracted Russian citizens from internal affairs. It also raised the level of national pride as a result of the economic sanctions imposed on Russia   after seizing the Crimea peninsula from Ukraine. This led to a decrease in oil prices and the spread   of poverty between Russian citizens.

The Future of The Russian Role in Syria
Through its military intervention Russia was able to fortify the Syrian regime from any near fall in addition to recognizing the presence of the Syrian opposition on the ground.
It's thought that Russia's presence in Syria would take a long time to fulfill political and demographic roles. The first role is for protecting Moscow's interests in the Mediterranean and the geographic region that Russia describes as the "effective Syria" or "small Syria" while the other role is to achieve Russia’s historic dream as Orthodox Christian power with a major presence in the region. This paves the way for establishing a State with elite minorities culturally, socially, and economically and presents an example of coexistence between these components.
The de-escalation zones represent a consolidation of the Russian strategy in separating these components through borders, which paves the way toward a federal solution and a constant conflict that can be only prevented by the long-term Russian military presence in the region!

4-The Self-Governance for Kurds in Syria establishes a representation in Moscow, Al Hayat Journal, 7/2/2016