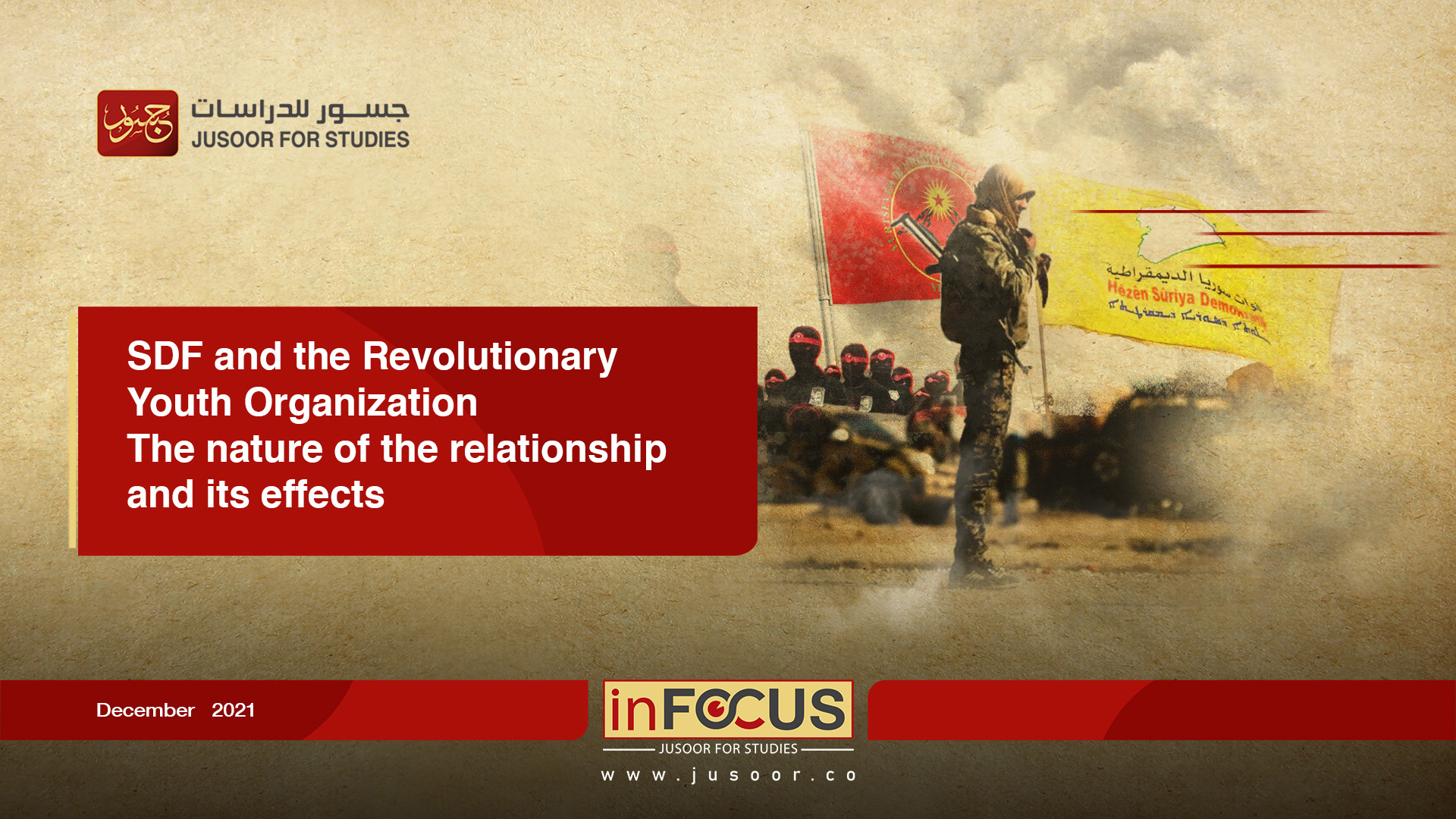 The leadership of the Syrian Democratic Forces "SDF" found itself obliged to unveil its relationship with the Kurdish Tevgera Ciwanen Soresger (Revolutionary Youth Movement) /  (RYM) .  In a Tweet, Mazloum Abdi, the joint commander of the SDF, expressed his sympathy with the group saying that "five members of the Revolutionary Youth Movement were killed and four wounded" most-likely  by a Turkish drone attack carried out on a site in the city of Ain al-Arab on December 25, 2021.
Both the Revolutionary Youth Movement and the Kurdistan Women Union (KWU) are directly linked to the Kurdish Democratic Party (KDP). Moreover, the two groups are mainly accused of being involved in the recruitment of children into the ranks of PKK and its military arms through military and ideological training camps and events. These two organizations are not only accused of committing multiple human rights violations, represented in the suppression and confrontation of demonstrations and activists who are against the Autonomous Administration’s policies, but also of launching repeated attacks on the offices, members and rallies organized by the "Kurdish National Council" inside the SDF-controlled areas.
With the exception of Abdi's condemnation of an attack on the office of the National Council in Ad-Darbasiyah on December 17, the SDF has never condemned the Movement's violations; as he described those who did so as "a group of saboteurs who violate the law," but without mentioning the name of the organization they belong to. This, in fact, reflects the reality under which the people in the self-ruled areas live, where the RYM commits violations that are in the interest of the SDF without the latter being blamed for that
Obviously, Abdi’s sympathy with the Movement affiliated to the PKK mentioning it by name, reflects a change in the typical relationship between the SDF and the PKK's arms that executes the party's policies directly.  It particularly unveils the complementary relationship that brings the SDF and the Revolutionary Youth Movement together as well as other arms of the PKK. Such developments in reality would have considerable consequences on the SDF and its political arm represented by the Syrian Democratic Council (SDC), in addition to its Autonomous Administration.
Accordingly, the most obvious consequences are:
1- Politically, the inflammation of tension and distrust between the SDF and the Kurdish National Council, whose activists, offices, and activities within the SDF-controlled areas are subjected to repeated attacks by members of these youth organizations; with the recent one being the “Kurdish Flag Day” attack in Ad-Darbasiyah.
2- Legally, SDF will be the primary group to be blamed for all violations and abuses perpetrated by these rogue organizations, whether against the residents of SDF-controlled areas or the surrounding countries. Moreover, the SDF’s relationship with the PKK-affiliated organizations confirms SDF’s awareness of these organizations and monitoring of their activities to say the least.
3- At the societal level, such a relationship would put both the SDF and the Autonomous Administration in an embarrassing position before the residents of the area they control. These residents are already experiencing hardship in all aspects of their lives because of these organizations’ abuses. Their most recent abuse led to the closure of the Semalka and Al-Walid border crossings that link the area with the Kurdistan Region of Iraq, (Iraqi Kurdistan). Indeed, the two crossings were the main artery, through which food stuffs, medical supplies, industrial and building materials get into SDF-controlled areas. Dozens of the RYM and the KWU members stormed the Semalka crossing and clashed with the members of the administration and protection of the crossing in the Kurdistan Region of Iraq. Their action led to the closure of the two crossings by the Kurdistan Regional Government (KRG) since December 16.
4- Administratively, the SDF’s condemnation of the air strike that targeted the PKK-linked organizations makes it a real partner to these organizations. It also confirms what the SDF has always denied, which is having ties with the PKK and its arms that are spread within the SDF-held areas.
In conclusion, the SDF is working hard to maintain a state of uncertainty, and ambiguity in specifying the relations and limits of responsibility
with the PKK-linked youth organisations. SDF will continue to invest in these organisations’ security activities executed by them due to the fact that they pour into its interests without bearing responsibility. However, with the continuation of targeting the cadres affiliated to it, the leadership of SDF, out of administrative and ideological motives, will uncover the real relationship connecting SDF and it’s affiliated organisations with the PKK . At that point, of course, the SDF should shoulder responsibilities whether in front of the local parties within its regions or the external, regional, and international powers.