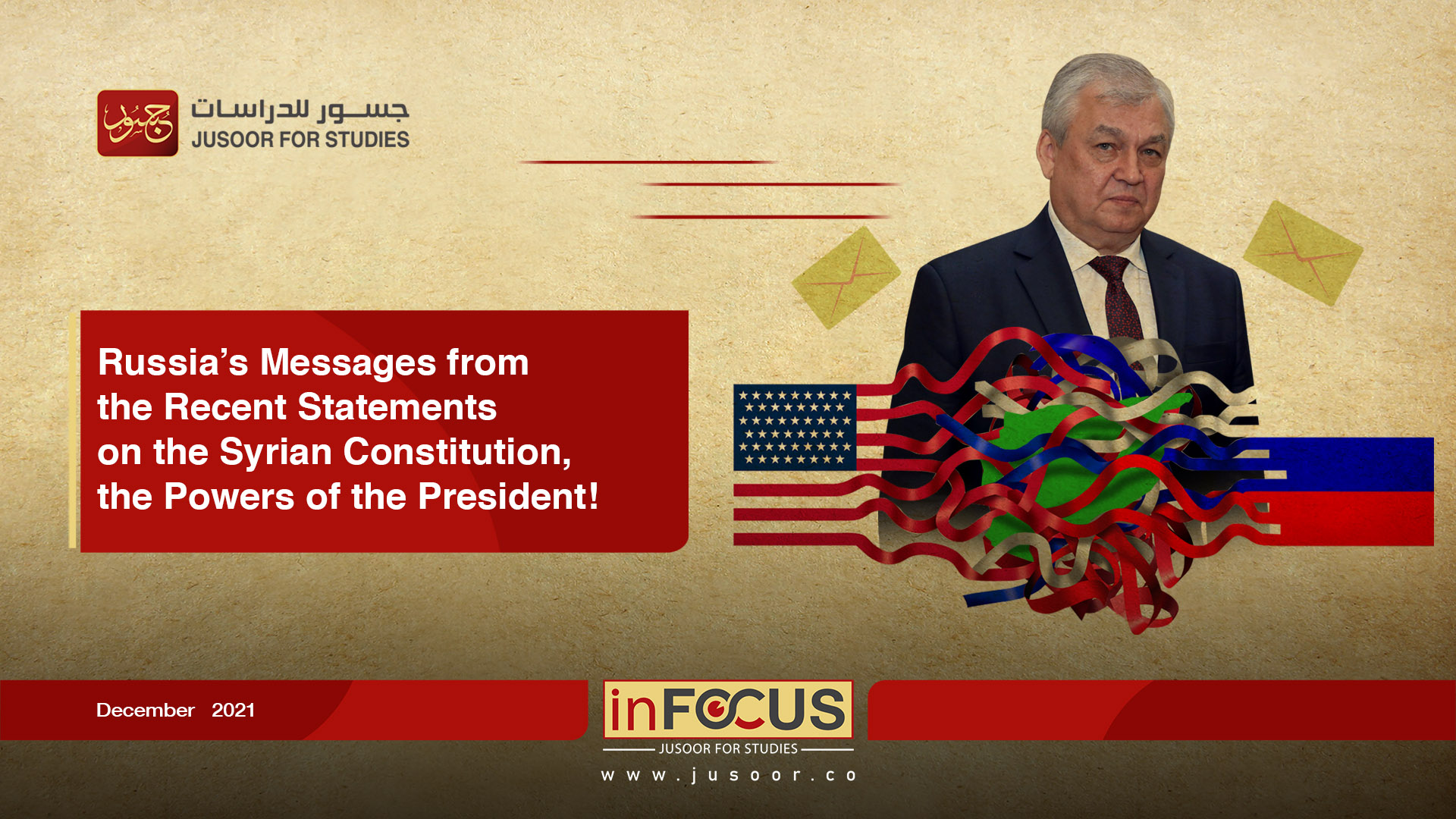 On December 27, 2021, the Russian President's Envoy for Syria, "Alexander Lavrentiev" made statements in which he considered that the process of creating a new constitution in Syria "must not be aimed at the change of power in that country". The regime's government is "satisfied by the current Constitution, and in its opinion no amendments are needed," Lavrentiev also added. Furthermore, the Russian Envoy stressed that "if the opposition thinks that changes mut be made, the issues of interest to them must be considered and put to the vote in a referendum or approved in some other way."
Lavrentiev's recent statements seem to contradict a previous Russian offer in June 2021, made by the Special Envoy to the Middle East and African Countries, Mikhail Bogdanov, where he expressed his country's readiness to support early elections in Syria without waiting for the end of Bashar al-Assad's term, in case the Syrians agree on writing a new constitution.
Meanwhile, Lavrentiev also pointed to, in his statements, a veiled Russian threat to cancel the mechanism for cross-border aid operation for millions of desperate people in Syria, describing it as "illegal". This comes only six months after the "American-Russian" understanding established to extend the mechanism for the entry of aid through border crossings for another six months period, to be a full year in total.
However, the Russian statements indicate that the strategic dialogue between Moscow and Washington has faltered, which was launched in July 2021, to discuss the contentious files between the two sides, most notably:
1- Ukraine's membership in the North Atlantic Treaty Organization (NATO), which Russia categorically rejects due to its fear of the alliance reaching its borders, as the United States of America supports this idea.
2- Russian-Chinese” cooperation, and the threat it poses to US influence, as successive US administrations since the era of “Barack Obama” do not hide their fear of the China's rapidly growing economic, military and political power. Also, Washington wants to have guarantees from Russia not to interfere in the conflict. Moreover, controversial files could include the American deployment in north-eastern Syria and its future. Russia sees this matter as a real obstacle in resolving the Syrian file, not only considering the region’s economic importance as it contains oil and gas fields, but also the region is a geopolitical axis, given its proximity to the Turkish and Iraqi borders.
It is noteworthy that the United States of America reopened the file of producing and using chemical weapons by the Syrian regime in attacks against civilians, by imposing sanctions on military leaders, in early December 2021.
This likely has obstructed some efforts made by some Arab countries to normalize their relations with the Syrian regime.
Meanwhile, late this month saw the return of significant US military activity to north-eastern Syria, through the conduct of several joint patrols between the US forces and the "Syrian Democratic Forces" in the province of "Al-Hasakah" during December 2021. Consequently, all these indicators reinforce the idea of stumbling dialogue with Moscow.
In general, it can be said that Lavrentiev's statements, which appear to be a Russian reversal, come in response to the signals sent by Washington earlier. In truth, these statements have no actual impact on the constitutional process; because Russia did not originally show seriousness in drafting a new constitution that would reduce the powers of the Syrian President. In fact, the Astana track went beyond the issue of writing a new constitution some time ago and replaced it with constitutional reforms. Thus, Lavrentiev's statements are the most expressive of the reality of Russian trends, if Moscow did not receive a tangible return that would prompt it to act in the opposite direction.