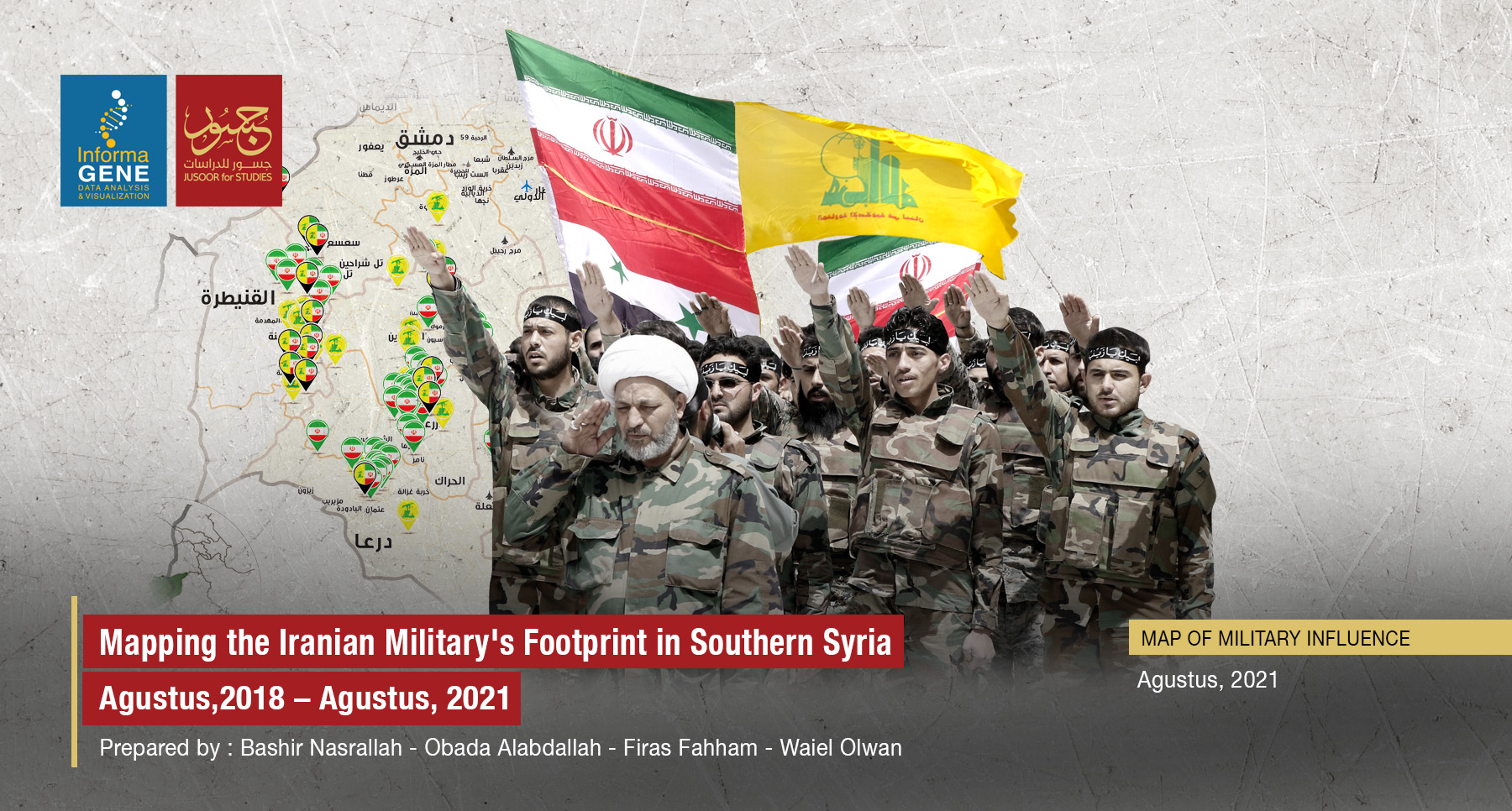 Mapping the Iranian Military's Footprint in Southern Syria
From Agustus, 2018 to Agustus, 2021

In July, 2018, each of Russia and the Syrian opposition factions had signed the "reconciliation agreement" in Syria's southern governorate of Daraa, at time U.S.-Russian understanding with Jordan’s and Israel’s blessings took place, accordingly, Moscow became a "guarantor."

Russian had to prevent-under the international understanding- any demographic changes in the region and it also had to remove the forces of the Iranian Revolutionary Guards Corps (IRGC) and the Lebanese Hezbollah from the Golan Heights, and keep them away from the Israeli border by about 85 kilometers (53 miles), in addition to not allowing those forces affiliated with Iran to expand or spread in southern Syria.

However, the current reality of the region is quite contrary to what was agreed upon between international actors on southern Syria, as outposts held by forces from Iran and IRGC-backed Afghan and Pakistani forces as well as those of the Lebanese Hezbollah, have more than doubled, rising from 40 security and military posts in August, 2018, i.e., immediately after the implementation of the agreement, to 88 ones by August, 2021.

In addition, the 90th Brigade of the Syrian military’s 1st Corps, deploying in the southwest of Damascus countryside and in the whole of Quneitra governate, whose command headquarters is only about 20 kilometers from the Golan Heights, has recently turned into an advanced outpost for the Iranian Revolutionary Guards Corps (IRGC) and the Lebanese Hezbollah.

In light of these facts, it is only natural for the influential  international actors, those who have key roles in southern Syria to have increasingly less confidence in Russian pledges, as Moscow seeks to make advantage of controlling the Iranian presence and use it as a bargaining card in southern Syria to resolve the conflict in Daraa al-Balad neighborhood and the western countryside of Daraa, by concluding an agreement with Daraa’s local fighters and forcing them to hand over their weapons, taking into account the approval of the countries that signed the 2018 understanding.

To illustrate this, Jusoor Center for Studies and InformaGENE Platform for Data Analysis and Visualization has just issued a map for comparative and reference purposes showing the scale of the growing spread of the Iranian outposts run by the Iranian Revolutionary Guards Corps (IRGC) and the Lebanese Hezbollah's posts as well as other joint ones run by both of them. In fact, this very map reflects the reality of the Iranian and its proxies' presence as it is right now in the governorates of southern Syria (As-Suweida- Daraa - Quneitra) compared to the number of their own outposts were in 2018. Besides, the map shows that there is neither reduction nor an ultimate elimination of Iranian posts in the region of Israel's border, instead the number of security and military posts has increased alongside the border areas. 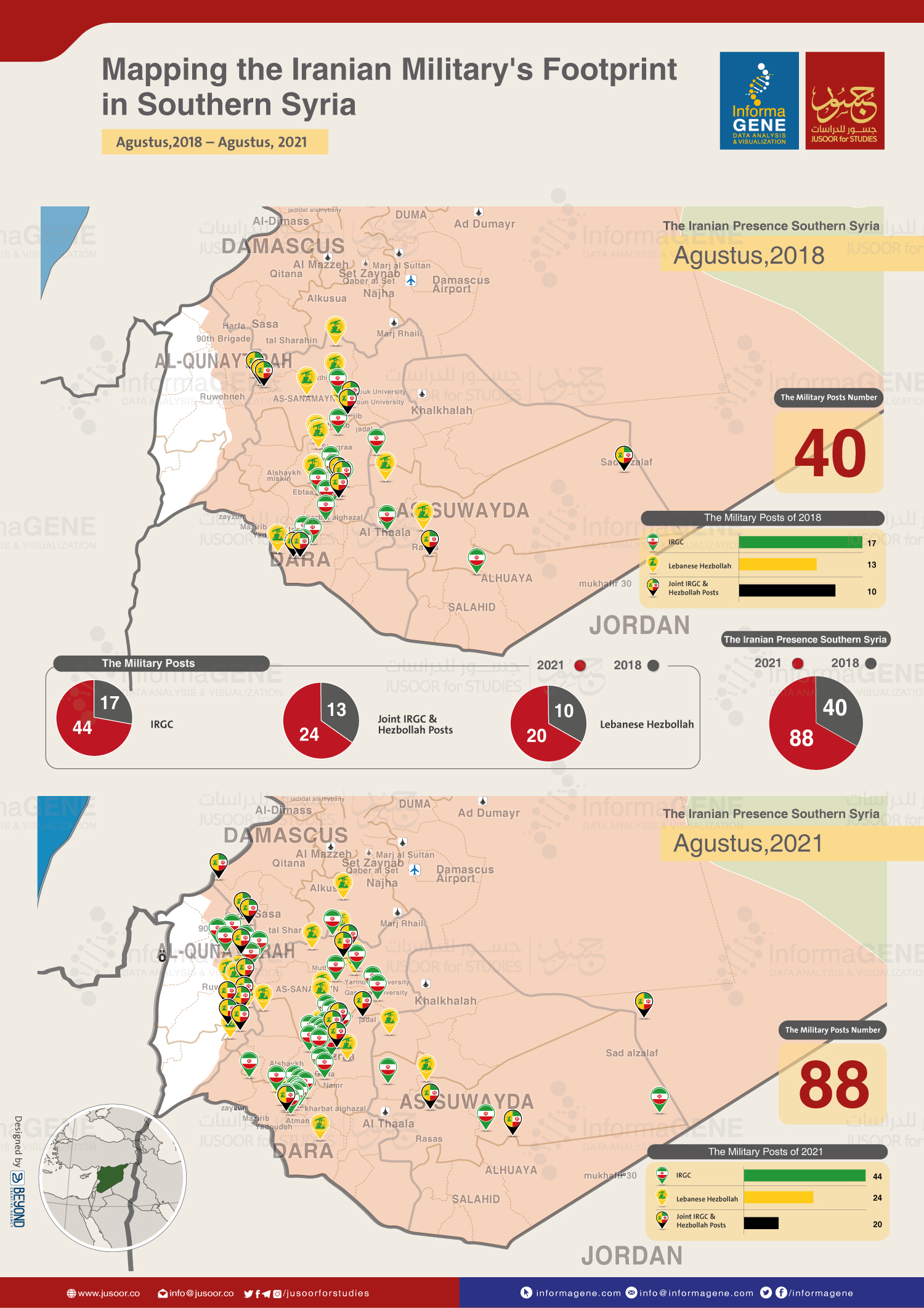