Is the Syrian regime's economic openness troubled due to security concerns or economic infeasibility? 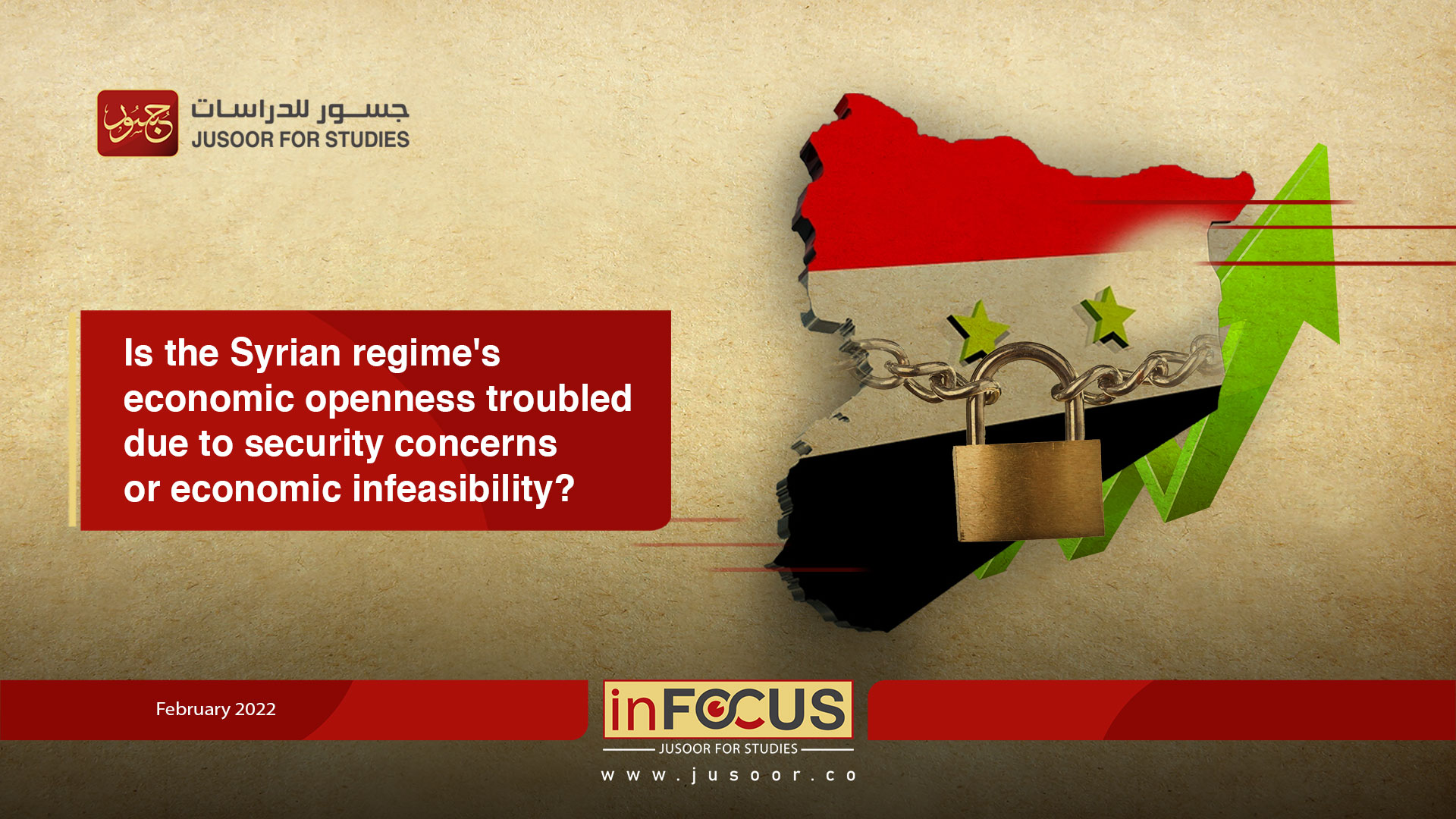 Is the Syrian regime's economic openness troubled due to security concerns or economic infeasibility?

134
Is the Syrian regime's economic openness troubled due to security concerns or economic infeasibility?
On February 8, the Iraqi Minister of Economy and his counterpart of the Syrian regime held a meeting on the sidelines of the 36th session of the Food and Agriculture Organization (FAO) Regional Conference for the Near East (NERC) in the capital, Baghdad, and it was confirmed that the transfers of Syrian goods exported to Iraq are still underway via the border areas.
It seems that the regime is still unable to increase the volume of its exports to Arab countries despite the economic openness that took place in 2021, and the trade exchange figures between 2020 and 2021 do not, in any way, indicate actual progress or even a real breakthrough in economic relations.
In this regard, the bilateral trade between the Syrian regime and Jordan in 2020 amounted to nearly $30 million, to rise after all the facilities provided to $133 million in 2021. Although this number, however, increased more than four times within a year, it remained at very low limits.
Also, trade with Iraq amounted to about $11 million in 2020, and increased to about $45 million in 2021. As for Lebanon, which enjoys the best trade relations with the regime, bilateral trade in 2020 amounted to about $100 million, while in 2021 it reached more than of $230 million.
Undoubtedly, the previous figures indicate a noticeable increase in the trade exchange between the regime and neighboring countries, but this does not seem important at all. Previously, the bilateral trade of Syria with the Arab countries was close to $7 billion only, and it is currently less than half a billion US dollars. Perhaps the issues of security-wise and production are the most prominent things that prevent the development of economic relations between the regime and the countries that have border crossings with it, as explained below:
• Jordan constantly and repeatedly intercepts drug shipments coming from the Jaber-Nasib border crossing with Syria, which consequently prolongs inspections and reduces the number of cars that enter daily.
• Iraq fears that drugs and extremists might be smuggled into its territory across the common borders, especially as it seeks in various ways to control unofficial crossings according to the policy priorities put forward by Prime Minister Mustafa Al-Kadhimi during taking office. Moreover, such fears are added to the time and effort required by the system of transferring in force at the Qa'im-Bukamal border crossing; Where lorries coming from Syria are completely unloaded, then Iraqi lorries come to load goods.
• Lebanon does not have a security reservation on goods imported from Syria. The common borders are the most active borders ever, as goods enter and exit with great ease, given that Hezbollah controls over it totally. However, the economic reality in Syria does not allow for an increase in production, which is considered at very low limits.
• Low prices of goods entering and leaving Syria, accordingly Iraq, Jordan and some Arab Gulf countries import agricultural materials, detergents, and some re-exported materials from Syria. Meanwhile, Syria imports manufactured foodstuffs, threads, metals, medical equipment, solar energy devices, batteries, generators, and electrical equipment.
• The high cost of transportation, as a result of Syrian merchants relying heavily on the port of Aqaba in Jordan in 2021, which makes the transportation cost higher for drivers who deliver orders loaded in one move after they have to return without loads and therefore without any additional gains.
Based on the foregoing, it can be said that the regime does not have a lot of goods to export or a lot of money to buy goods, which makes the economic openness unfeasible, let alone the security cost of this openness; The smuggling of drugs, antiquities, weapons and people may lead to instability. Therefore, the continuation of talk about the necessity of achieving progress in trade exchange does not appear to be more than an attempt to achieve political and not economic gains in any way.