Investment Law No. 18 of 2021: Is it a compilation of previous laws or for finding attracting investment environment? 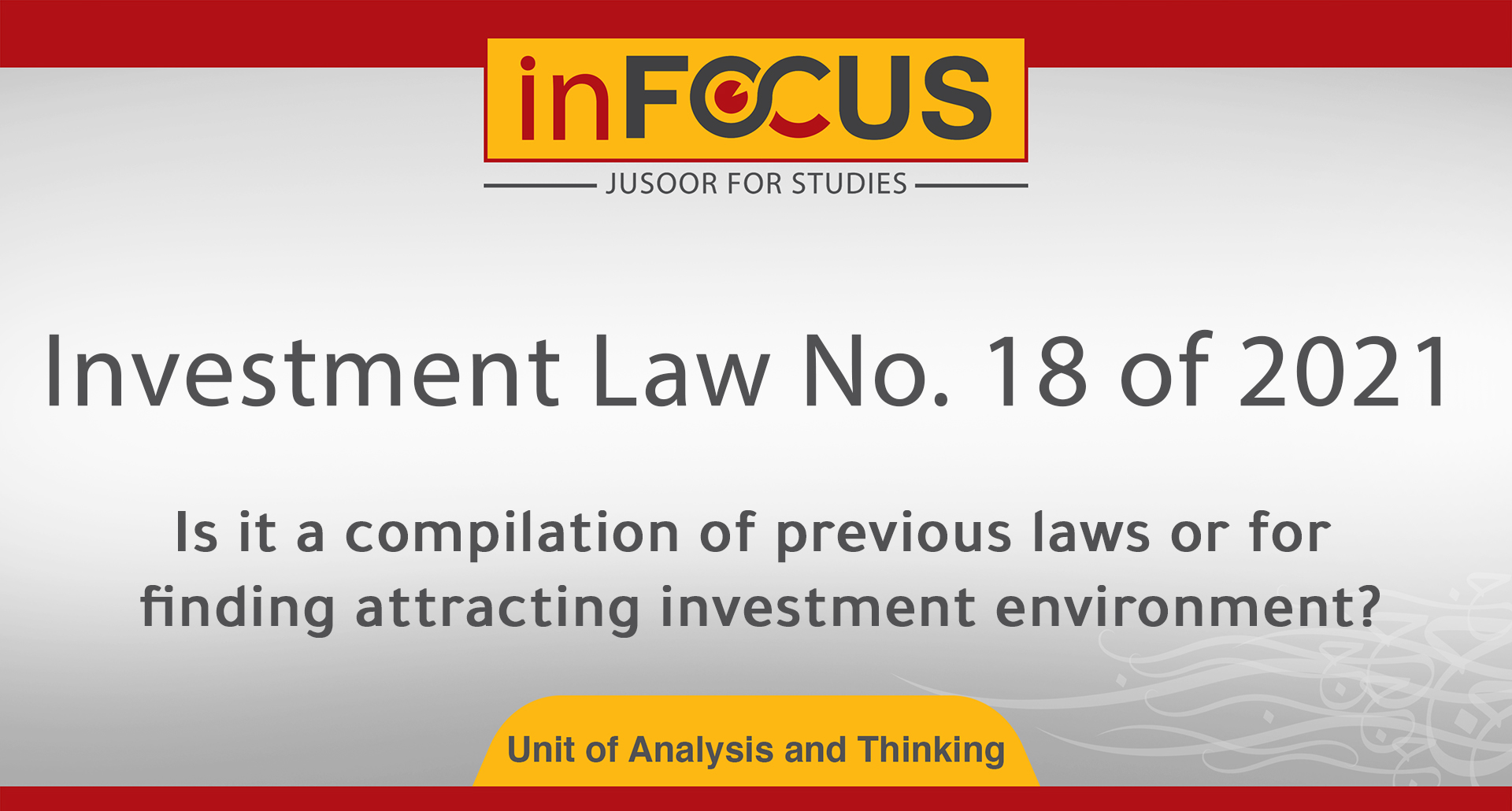 Investment Law No. 18 of 2021: Is it a compilation of previous laws or for finding attracting investment environment?

107
In Focus | Investment Law No. 18 of 2021
Is it a compilation of previous laws or for finding attracting investment environment?
In 1991 Law No. (10), known as the Investment Law, was issued, which gave investors access to unprecedented sectors, and provided tax and customs exemptions, and for the first time in which foreign and Syrian investors were equal in treatment.
Thereafter, the investment environment witnessed additional improvements in many laws, such as Law No. 7 of 2000, which provided ownership for project purposes and the freedom to transfer funds. One of the most prominent difficulties faced by investors at the time was convincing the competent authorities that the targeted project fell within the context of Law No. 10, which would not have been possible without paying huge sums as bribes.
In 2007, Law No. 10 was abolished and Decree No. (8) replaced it, which tried to regulate issues related to investment and find an investment environment for those wishing to have investments in Syria, which is the law mainly in force in Syria, along with decrees and subsidiary laws.
Decree No. 8 provided some guarantees to investors, such as resorting to the Arab Investment Court in the event of disputes and the freedom to transfer profits and funds, and it provided facilities for projects that start works in developmental regions. A number of amendments, laws and subsidiary decrees were also made from that date until mid-2021, until the issuance of Law No. (18) of May 19, 2021, to regulate investment in Syria.
The most prominent points stated in the new law are as the following:
• The projects that are established by both the public and private sectors are subject to the provisions of the law. Guarantees have been given for the stability of the investment promotion process and not to be confiscated except by a judicial decision and for public benefit purposes, and under compensation.
• Law and economics experts have been added to the Supreme Council for Investment; in addition to the competent ministers, a representative of the Chamber of Tourism and a legal expert have been added to the Board of Directors of the Investment Authority headed by the Minister of Economy, in a way under which an attempt to give the administration greater importance.
• The Single Window for Investment Affairs has been renamed as the "Investor Service Center", without making fundamental adjustments to its method of operating or its methodology, or overcoming the old problems that used to favor one investor over another, or delaying and obstructing the investors' transactions.
• A complete exemption from income tax was given to agricultural projects and clear reductions for projects in developmental regions. The law provided in advance for tax and customs exemptions, and matters not left to estimates of the duty bearers.
• The possibility of returning to either the Arab Investment Court or any regional or international courts or bodies has been canceled in the event of disputes, and returning the matter to consensus or the competent judiciary, and an arbitration center has been established in the Federation of Syrian Chambers to oversee investment disputes, but in the case of foreign law, the ruling must not contradict Syrian laws.
• It has been decided to restrict the process of transferring wages and salaries to experts and foreign workers by 50%, provided that it is through an approved Syrian bank, and it is not permissible to transfer a larger percentage than that.
It is noted that Law (18) did not bring anything new, but rather replaced a number of previous scattered laws, namely Decree 8 of 2007 and Decree 9 of the same year, as well as articles of Law No. 186 in 2007 and others.
The law also attempted to clearly define tax and customs exemptions, and not to be left to the supervising authorities, but it did not specify the mechanism of action for those bodies or ensure the authorities' response to the implementation of the provisions of the law, as the investment crisis in earlier times was that the granting of approvals is faster for the bodies supported by the regime, while other investments face restrictions and delays, in order to push investors to pay the bribes required to get their affairs done.
Unit of Analysis and Thinking - Jusoor for Studies
To visit the English Telegram channel: Click here