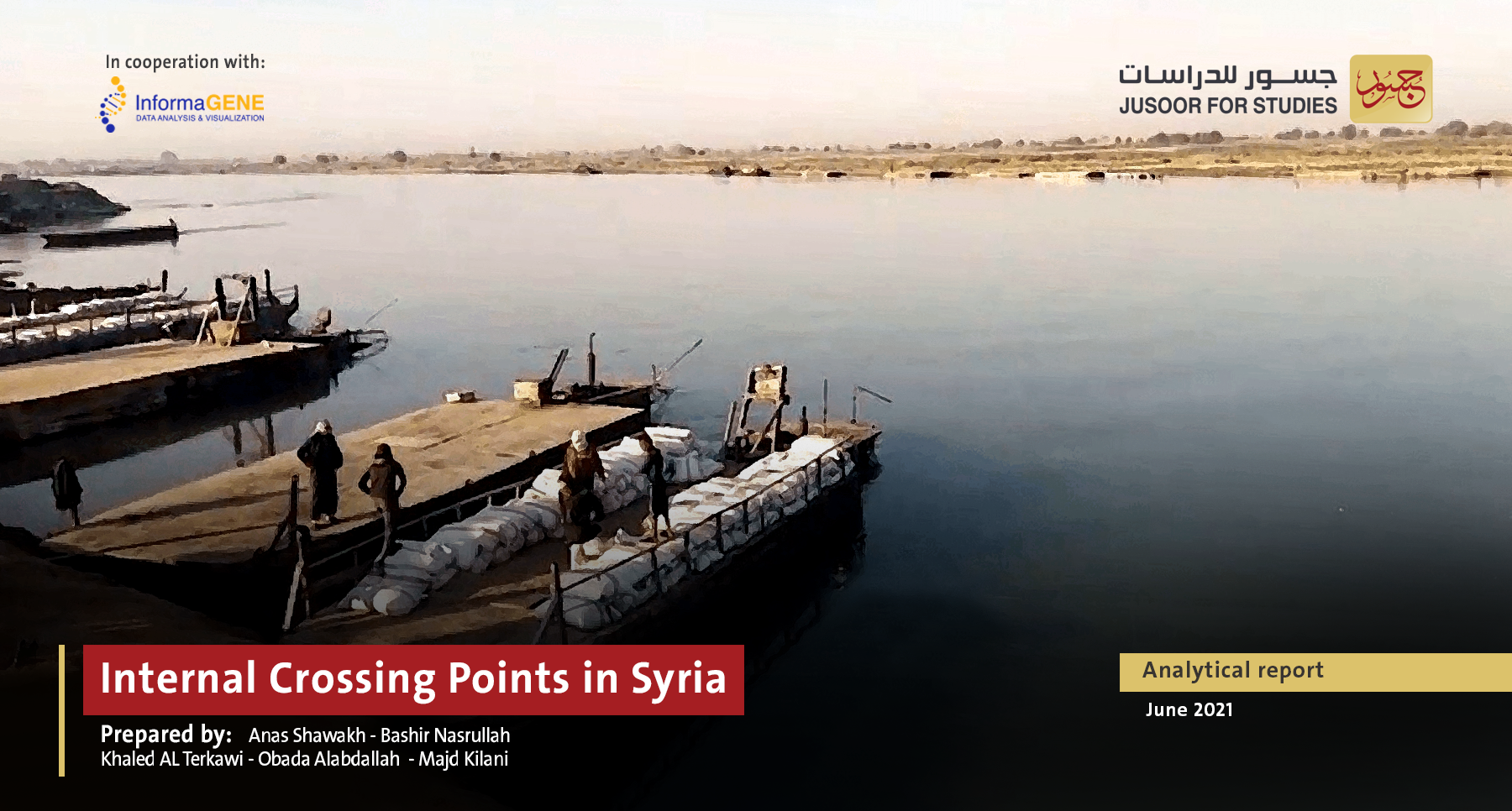 A research material that portrays the status of the frontline crossings between the parties to the conflict on the Syrian map, which is now described as the frontline crossings inside Syria. The map roughly identifies the key smuggling points between the various areas of control, with a political, social and economic analysis of the phenomenon, its causes and repercussions.
The report has been produced by Jusoor Center for Studies in partnership and cooperation with the Informagene platform for data analysis.

Since mid-2011, the Syrian regime has used the tactic of besieging the neighborhoods that had witnessed uprisings against the regime in various regions across Syria, leaving only few routes linking these neighborhoods with their surroundings, in order to control the movement of people and goods in between. At the beginning of 2012, the siege tactic was expanded to become more systematic tactic against these areas.

Given the presence of some key commodities in Eastern Ghouta needed by the residents of Damascus city, such as milk and dairy products, and because of the urgent need of the people of Ghouta for various other types of food; a commercial relationship was established between the areas of Eastern Ghouta and Damascus through a crossing point was controlled by the two conflict parties. This crossing point used to be closed or opened often based on the development of the conflict. In most of the besieged areas, the stronger party was always the one that used to block the crossing points, where we saw the Syrian Regime controlling and restricting the crossing of humanitarian aid and goods as well as the movement of individuals.

In addition to the crossing points that emerged as a result of the aforementioned policy, others were founded between the different areas of control, which were initially divided only between the regime and the opposition factions, then other crossing points emerged with the areas controlled by ISIS and areas controlled by YPG the People's Protection Units (which later became under the name of the Autonomous Administration (or Self Administration) areas and under the protection of the Syrian Democratic Forces (SDF), which was established later.

Trade ties and the movement of individuals between these regions continued even under the most difficult circumstances as each region has a peculiarity that is not available in other areas within Syria, which resulted in almost a full trade exchange. Moreover, as a result of the social relations and the economic interests of individuals, their movement through these areas became a natural matter despite its risks.

Paradoxically, theoretical studies of some geographical areas such as states and cantons required to marginalize some variables to examine the impact of others, and this very issue exists as an economic theory, where economists usually assume when studying a state’s economy that it is an isolated state disregarding any external conditions or changes that may affect the subject country, in order to study the internal factors that lead to changes in income or price, and other variables that are being worked on. Economists usually conclude their lectures saying that they do so for an academic reasons purely related to the economic theories they follow, and that such  situation cannot exist in reality, However, this case has been emerged in Syria since 2012, and it has become a practical reality that can be studied. 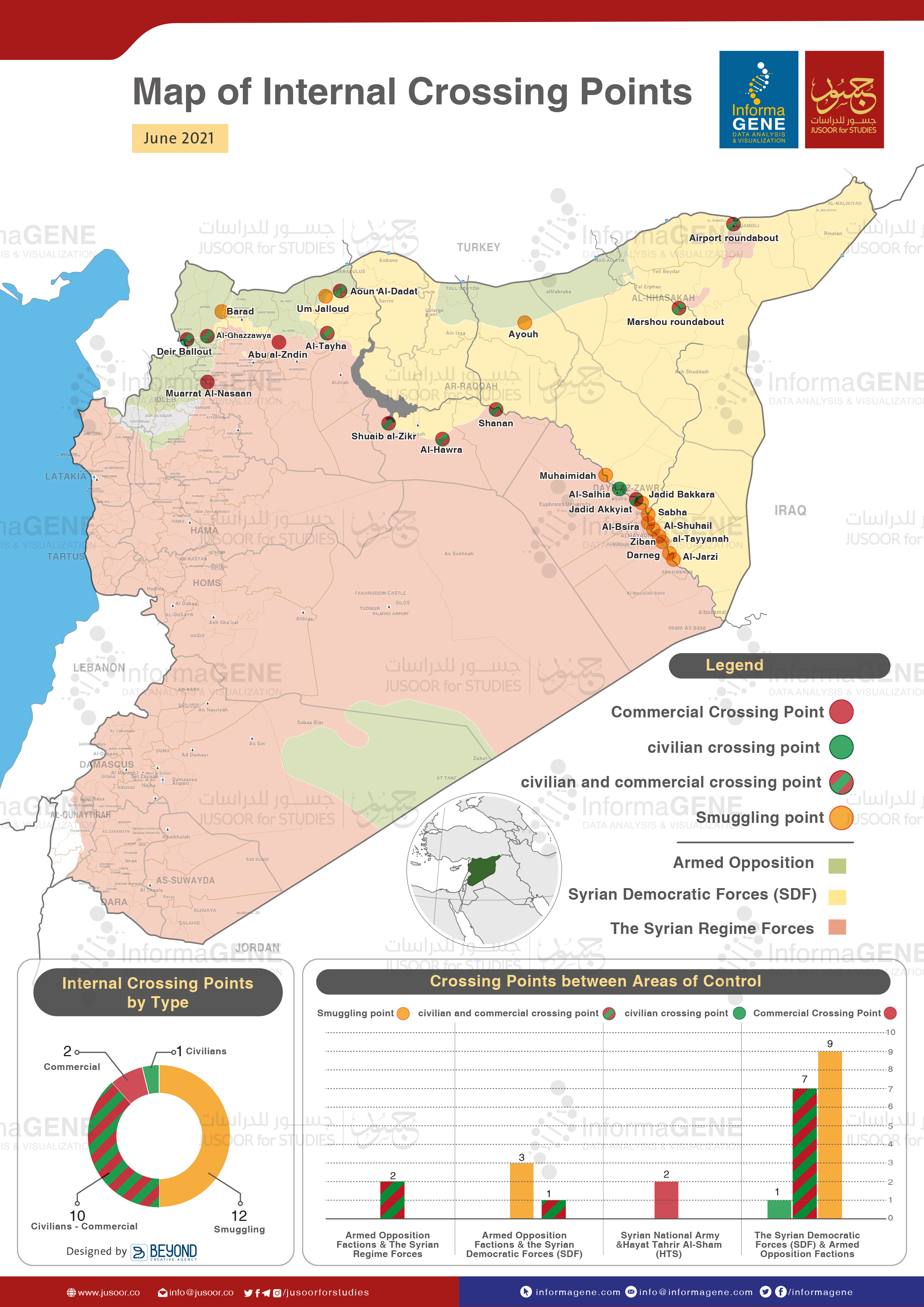