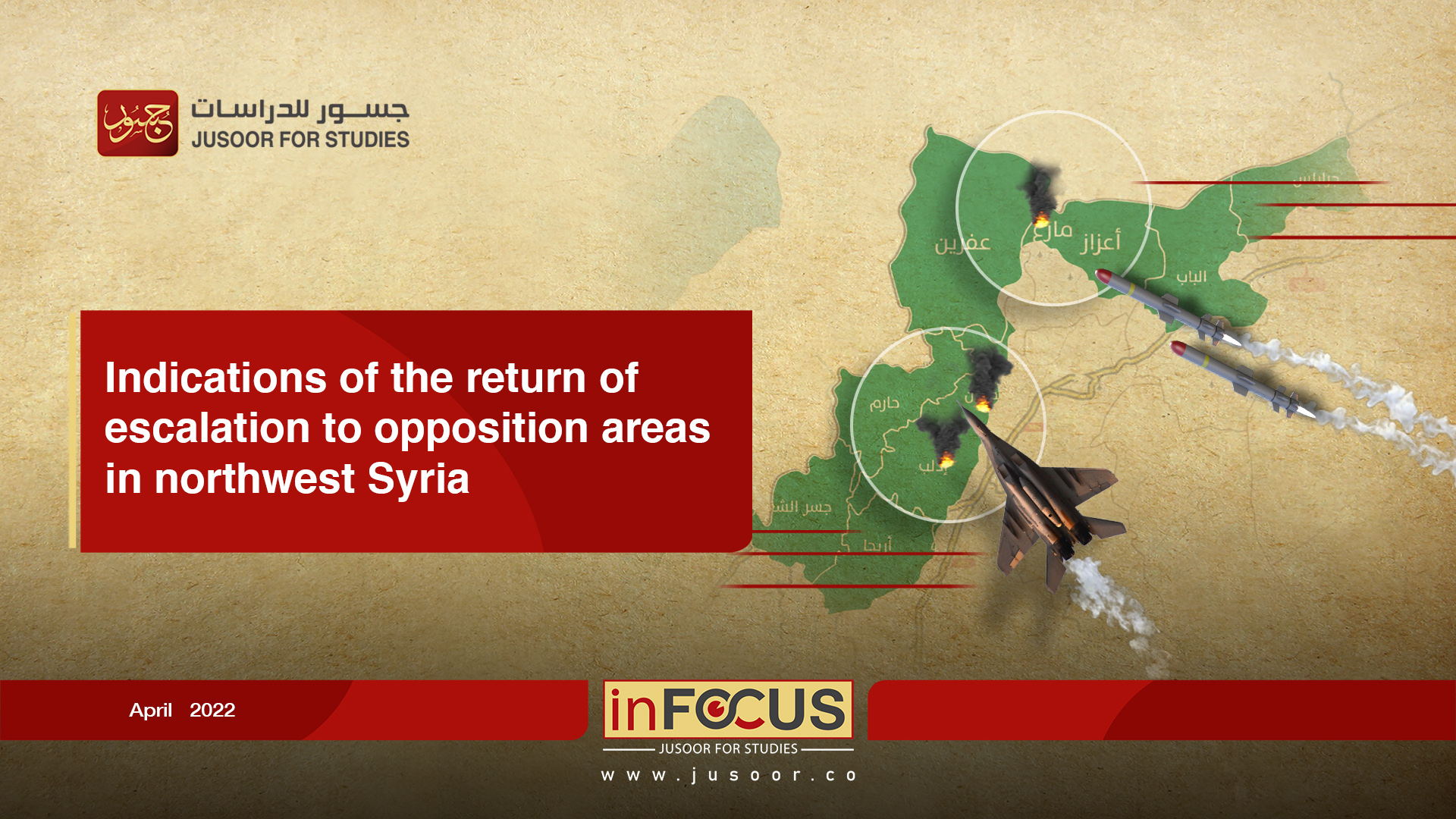 188
Indications of the return of escalation to opposition areas in northwest Syria
Between April 23 and 25, 2022, Russian military aircraft launched nearly 12 air strikes in northwest Syria, targeting the areas of Jabal al-Zawiya, south of Idlib, and Afrin and Darat Izza, north and west of Aleppo, with overflights and the launch of "air-to-air" missiles in the airspace of the area.
The recent escalation included targeting areas in which Turkish military bases are located, such as Darat Izza, west of Aleppo, in addition to flying over those bases.
On April 23, 2022, a Turkish armored vehicle was targeted with a guided missile. Afrin Liberation Forces, an armed force directly affiliated with the Kurdistan Workers’ Party (PKK), which was established at the end of 2018 claimed responsibility for the attack. The attack was carried out from areas under the influence of the Syrian regime and Russia, which indicates the reduction of Moscow's commitments related to limiting SDF and PKK attacks against Turkish forces.
Looking at the timing and method of the escalation in northwestern Syria, it could be said that Russia has several motives, which are:
• Russia’s desire to emphasize that it is still the main influential actor in Syria, despite its preoccupation primarily with the conflict in Ukraine. It seems that Russia is not satisfied with the high frequency of Turkish air operations against the PKK cadres and the military councils of the SDF in northeastern Syria, which are often conducted simply after the Turkish forces notify the Russians, that is, without sufficient coordination, as Ankara is trying to exploit the current political conditions to achieve a number of security goals.
• Russia is keen not to lose confidence in the SDF, and to show its ability to provide guarantees that will prevent Turkey from carrying out new military operations against the SDF-held areas, especially since the siege that had been imposed by SDF on the security square in Qamishli, al-Hasakah countryside in mid-April 2022, may be an expression of lack of satisfaction with Russia's position on Turkey's escalation against it.
• Russia's attempt to influence the course of the "Turkish-American" strategic mechanism, which was launched in early April 2022, and the discussions between the two parties on military, security and economic files, which were their last rounds in the capital, Ankara, on April 23.
It is possible that Russia is using the method of military pressure in Idlib province, where Turkish forces are deployed; with the aim of influencing Ankara's political decisions; By re-emphasizing its ability to threaten Turkish national security if it had a desire to enhance coordination and cooperation with the United States at the expense of Russia.
• Russia’s resentment and rejection of the Turkish government’s announcement that it has a plan to return Syrian refugees to “safe areas”; It was done unilaterally and without coordination and reaching understandings with Russia on the contentious issues that are still pending between the two parties, including Hayat Tahrir al-Sham’s control of Idlib, and the matter of running the international roads. Also, Moscow may be afraid of a "Turkish-American" understanding that will lead to the declaration of a safe zone in northern Syria, which is an old and renewed Turkish demand.
In general, the recent military escalation represents a tool of pressure more than it indicates the tendency of international actors to undermine the understandings in the region, especially since Russia, although it still has an influential ability in the Syrian file, is aware of the repercussions of breaking the understandings with Turkey, which may push Ankara to further rapprochement with the western axis in the Ukrainian file. It appears that Turkey deliberately responded directly to the escalation process by announcing that it would not renew the permission to allow Russian planes crossing from Turkish airspace to Syria.