Glorifying the Leader in the Kurdish Political Movement 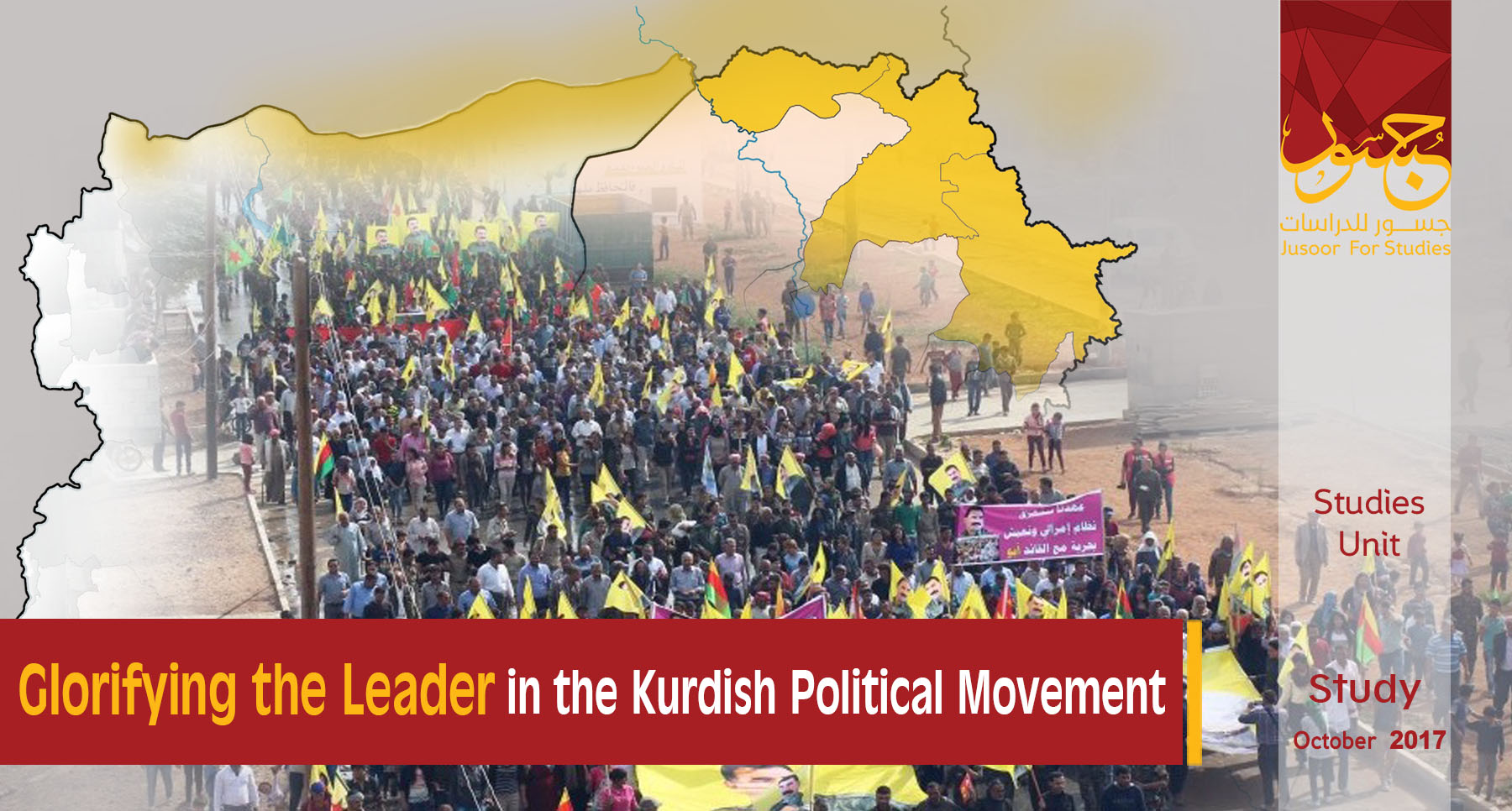 Glorifying the Leader in the Kurdish Political Movement

1- All services in Syria were considered as achievements of the “Corrective Movement”. Hafez al-Assad used the name “the Correction Movement” in order to describe his coup against his comrades in 1970.

5- The first emblem of the party was a red background, a hammer, an anvil, and a yellow star in the middle.

6- Öcalan was born in a village in Şanlıurfa Province in eastern Turkey. He studied law in Istanbul University but transferred after the first year to Ankara University to study political science. In 1978, Ocalan founded PKK. He left Turkey in 1980 and headed to Syria. In 1984, Ocalan declared the armed struggle against the Turkish State for the sake of establishing the Kurdish State and left Syria in 1998 due to Turkish pressure on the Syrian Government. He was captured in Kenya on 15 February 1999.
7- Hawar Agency, a commemoration function of Üveyş Öcalan in Al-Malikiyah and Al-Muabbada, 11/4/2017
See also: Hawar Agency, Ocalan launched the revolution of liberating the women after analyzing the personality of his mother, 11/4/2017
8- Al Hayat Journal, PKK and its tricky narratives with regards to the pictures showing Ocalan as “ascetic” and “eternal leader”, 23/2/2017
9-  KDP, an overview about KDP
10-  Masoud Al Barzani was born on 16 August 1946 in Mahabad in Iran. This date is similar to the date of founding KDP by Mustafa Barzani. Masoud Barzani assumed the position of leading KDP in 1979 and he has 8 children who are officials in Iraq Kurdistan. On the 12/6/2005, Masoud Barzani became the first president of Iraq Kurdistan and still.
11- Vedeng, on the occasion of Mustafa Barzani’s birthday: the National Council in Qamishli hosts the head of the local councils, 15/3/2017
See also: Rojava news, media report about festivals in Afrin district that are administrated by PDK-S, 15/3/2017
Altaakhipress, in the occasion of the birthday of the eternal Kurdish nation’s leader “Mustafa Barzani”, 14/3/2017

12- There are many Kurdish parties in Iraq Kurdistan that seek attaining seats in the parliament, as the strongest parties are ordered as follows: KDP, PUK, Gorran Movement, Kurdistan Islamic Union thus, it is hard to impose the “Barzani’s Approach” or “Barzani’s Deification” on all political parties.
13- Jalal Talabani was born on the 12/11/1933 in Kelkan village. He graduated from Law School in Baghdad University. He joined KDP and defected after a period of time. He founded PUK in 1975 and became the president of Iraq in 2006 and reelected for the same position in 2010. He died on the 3/10/2017.
14- Kurdiyati or Kurdism: means the faithfulness and affiliation towards the Kurdish nationalism.
15- Erdoganism: a term used by supporters of PYD against any opponents and means that the person is an agent for Erdogan and the Turkish Government.
16- It is thought that PYD and Movement for Democratic Society use the youth from Rojava Youth Union in order to conduct illegal actions such as beating, threatening, and vandalism that institutions in Self-Governed areas cannot conduct. These people are normally masked when they conduct such actions, while their deeds are justified as reckless acts.
17- Abdul Hameed Haj Darwish was born in 1936 in Al Qarmanah village and he was the first founder of a Kurdish party in 1957. He was elected as Secretary General after the first split. He changed the name of the Kurdish party to the “Progressive Democratic Party” in Syria. He was elected as a member of the Assembly Council in Syria between 1994 and 1998. He was elected as head associate for Damascus Declaration. He is still the leader of the Progressive Democratic Party in Syria.
18- Highlights on the Kurdish Movement in Syria, Abdul Hameed Darwish, 2000, Page 102.
19- Aziz Dawood defected in 1992 and founded the Kurdish Democratic Equality Party. In 2011, Faysal Yousef defected and established the Kurdish Reform Movement in Syria.
20- The usage of term “Jalali” was considerably decreased after 2011 because PUK dissociated itself from the Kurdish political conflict in Syria despite its political and media support towards PYD. The term “Jalali” was used considerably after the political conflict that turned into armed one between KDP and PUK in 1994. These conflicts had caused the spread of other terms such as “Barzanis” and “Apoci”. However, the term “Jalali” was scarcely used after the agreement of 1998, while the usage of terms like “Barzanis” and “Apoci” had decreased after the detention of Abdallah Ocalan in 1999. The Kurdish conflict reappeared after 2011 in Syria.
21- Some cases of refusing the marriage due to political disputes have been noticed especially, between the supporters of PKK and KDP, as the accusations of treason among those supporters have a negative impact on the social situation within the Kurdish setting.
22- You can find a picture of Kurdistan Regional Government (KRG) in addition to the ministries and departments
23- Thousands of women in Aleppo call for the liberation of the women, YouTube, Ajansa Hawar ANHA, 5/3/2017
24- See: Abdallah Ocalan, YouTube
Songs that glorify Masoud Barzani, YouTube
25- The emergence of the “claquer” took place in ancient Greece, as his/her duty was to motivate the audience in order to applaud at the end of a play.