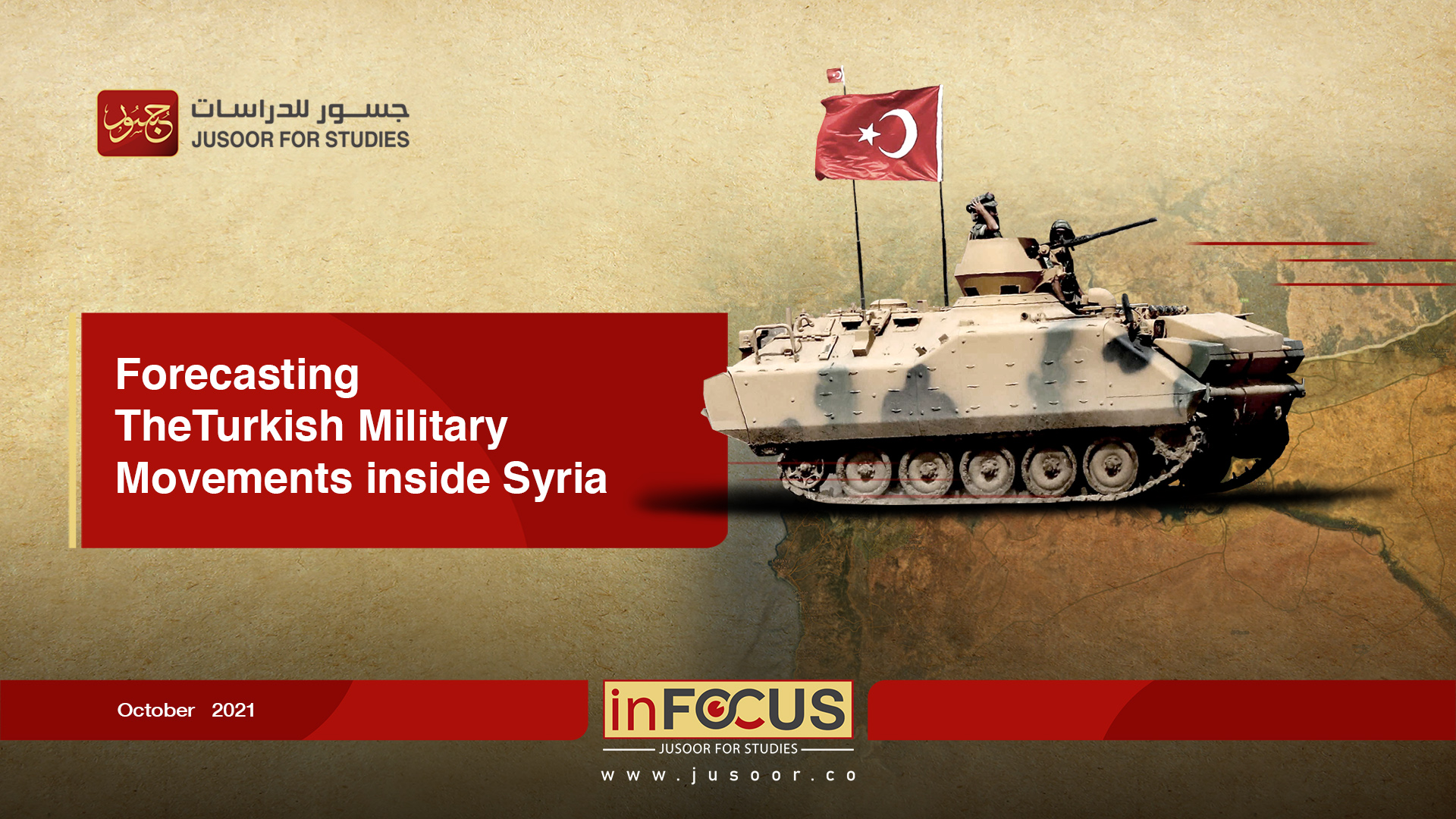 161
In Focus | Forecasting the Turkish Military Movements inside Syria
Since October 10, 2021, Turkish officials have increasingly vowed and threatened to launch a military operation in northwest Syria, which came after targeting an outpost housing the Turkish special operations police stationed in Marea, north of Aleppo, in addition to the fall of artillery shells on the “Karkamish” region of Gaziantep Province, southern Turkey.
Logically, "Tal Rifaat" and the surrounding villages north of Aleppo are considered at the top of the list of Turkish priorities, due to its proximity to the Turkish bases deployed in the area of "Euphrates Shield" operations, and as a result of the proximity to the border strip as well. Also, such areas are key locations for Turkey because controlling them allows Ankara to resettle tens of thousands of displaced people residing on the border strip. However, "Tal Rifaat" is added to "Ain Issa" in the countryside of Raqqa, in the list of priorities.
As a matter of fact, any Turkish military action aims at seizing more strategic cities and towns inside Syria needs, of course, concluding political understandings with the international actors, which may pave the way to take such moves.
Multiple characteristics might be predicted and likely scenarios could be imagined about some potential understandings that might prepare the ground for a Turkish military operation, if any:
1- Ankara’s willingness to put an end to the attacks being launched on its military bases and outposts in Syria, as well as some Turkish territories, on the grounds that they not only pose a security threat, but also have a high political cost for Ankara.
2- It is hard, logically speaking, to anticipate a Turkish military operation without prior coordination with international actors. This, definitely opens up the possibilities for dangerous confrontations against the US or Russian troops, which absolutely have high political and military costs.
3- Most likely, Russia will not agree to the Turkish ground advance in more areas located on international and commercial roads, such as "Tal Rifaat", which is located on the international road "Gaziantep - Aleppo", and the same applies to the city of "Ain Issa" in the countryside of Raqqa.
4- Obviously, Russia has made efforts during the past months to increase confidence-building with the Syrian Democratic Forces (SDF), in connection with attempts to convince the American side that Moscow is able to provide protection to the SDF in northeastern Syria, which pave the way for the US withdrawal from the region. Also, it is not likely to expect in the current period Russian withdrawals from strategic areas controlled by the "SDF" such as "Ain Issa", which is considered as the administrative and security capital of the "Self-Administration".
5- Russia would likely not oppose Turkey’s control of a new geographical spot, especially if it is near the Turkish border, and not part of the trade routes, in return for economic gains that may be represented in facilitating trade exchange between northwest Syria and the Syrian regime-held areas, or if Turkey does not obstruct the political path according to the Russian model.
6- It is unlikely that Turkey will make new concessions on Idlib in exchange for understandings, according which it will launch a military operation against the SDF. So, if any understanding guarantees Russia’s approval of Turkey’s control of strategic areas such as “Tal Rifaat”, “Ain Issa” and “Manbij, this can make Ankara agree to implement the "March 5, 2020" protocol, which provides for the establishment of a safe corridor on both sides of the "m4" road, meaning that the corridor is to be cleared of military factions without Turkish withdrawals.
Based on the foregoing, everything currently seems not to point to the possibility of major field changes on the Syrian case, and most likely, Ankara may consider satisfactory alternatives, such as carrying out some intelligence operations that will target leaders of the "SDF" and the Kurdistan Workers' Party (PKK) those are involved in attacks on Turkish bases, in addition to awaiting the appropriate political conditions which allow Ankara to accomplish its own goals.