Different Perspectives on the Use of Turkish Lira in Northern Syria 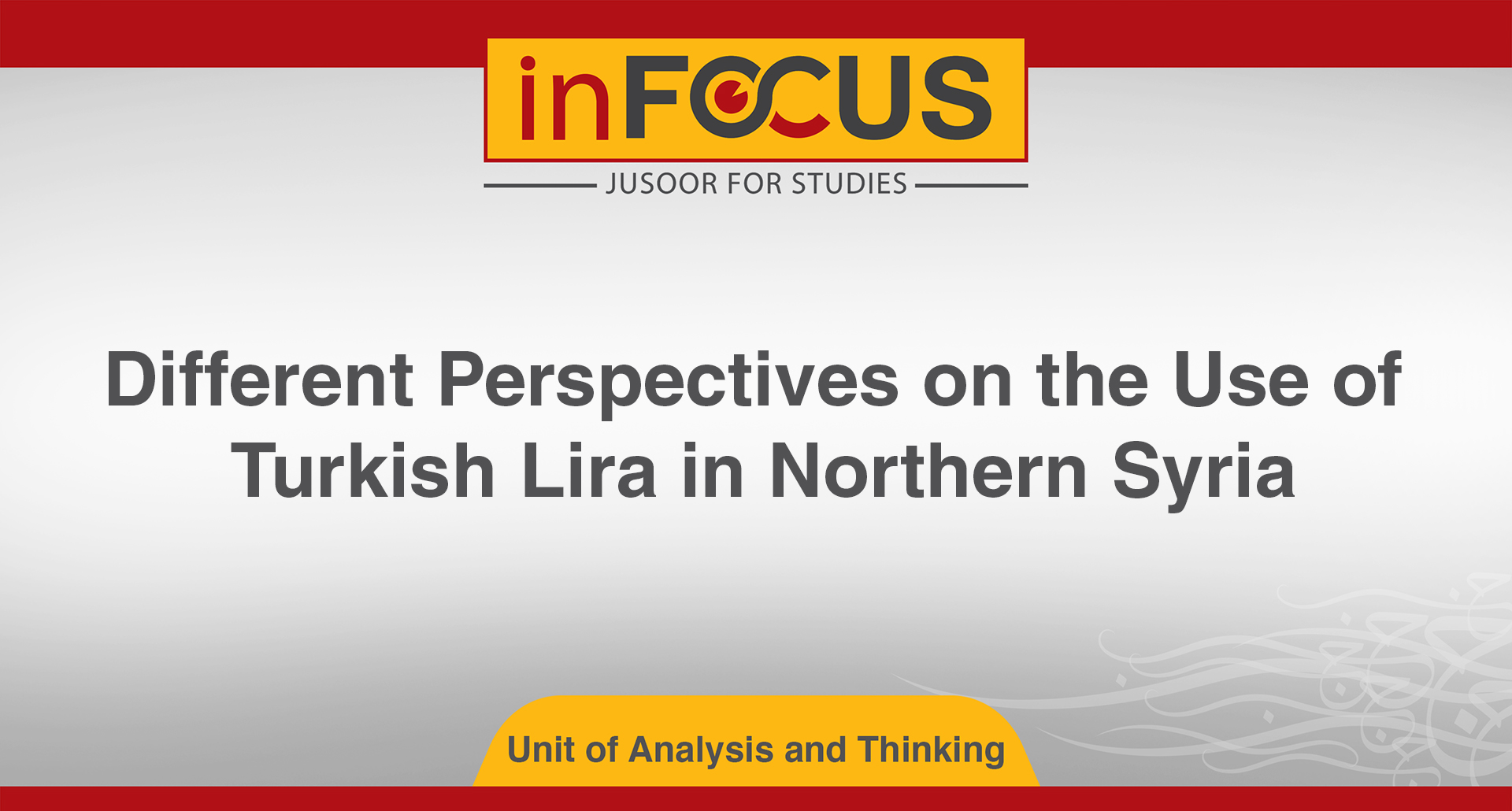 Different Perspectives on the Use of Turkish Lira in Northern Syria

Recently, calls for using the Turkish Lira instead of the Syrian Pound in northern Syria have intensified. Several local councils have issued pricing regulations in the Turkish Lira and the Interim Government supported this trend. The Salvation Government is promoting the idea of transferring to the Turkish currency as soon as possible based on the recommendation of its Shura Council. Previously, various parties made calls to abandon the Syrian currency on the pretext that it is the “regime’s currency” and using the currency falls within the regime’s interests. Simultaneously, other parties opposed these calls on the basis the Lira is a Syrian economic symbol and evidence of Syria’s unity. However, different interests lie behind these as discussed in the following points:
First: Concerning the use of the Syrian pound: In recent years, northern Syria has witnessed a decrease in dependence on using the Syrian pound due to the continued deterioration of its value. Most medium and large-scale deals are made in US Dollar - and more recently in Turkish Lira – including the purchase and sale of assets varying from electronic devices to cars and real estate. Even rental contracts no longer depend on using the Syrian Pound, and its circulation has become limited to retail purchases such as groceries, vegetables, fruit, used clothes and other basic goods and services.
The circulation of the Turkish Lira strengthened following the Euphrates Shield operation. The Olive Branch operation provided fighters with salaries as well as spending on certain key services alongside increasing commercial dealings with neighboring Turkish villages and cities. Turkey was more willing to control currency exchange and issued a decision for currency exchanges to be conducted via its national postal institution that opened offices in northern Syria.  In addition, most of humanitarian organziations and institutions’ transactions are made in Turkish Lira.
Second: The most prominent reasons the Syrian Pound has remained in circulation until now: Certainly, there are reasons for the Syrian Pound’s continued use in the recent period, despite the partial change to using foreign currency dealings. Among these reasons is the fact that public employees and retirees (numbering in the tens of thousands in the north) including teachers working in schools in northern Syria, continue to receive their salaries in Syrian pounds from official institutions affiliated with the Syrian regime government. In addition, the differences in the exchange rate made it attractive for those paying salaries in associations, institutions, and the private sector to benefit from the currency exchange process. It is something close to achieving personal interest by taking advantage of the exchange rate differences and transfer commissions, before paying salaries or delivering the financial support to the final beneficiary.
Likewise, currency exchange traders have increased in the north, which contributed to strengthening the position of the Turkish Lira, as the most important resource for currency exchange traders is not the actual exchange, but the speculation on currencies, including the Syrian Pound. Another reason is that people who collect the most Syrian Pounds are those trading in food goods, and they usually have strong connections with regime-controlled areas. Hence, their trade with regime areas necessitates they trade in Syrian Pounds in addition to the money they gain from retail sales. Furthermore, military factions with relatively rich resources continued to pay fighters and affiliates with Syrian Pound as it is more affordable for them in terms of paying their obligations and mobilizing more followers at lower costs.
Third: The interests of actors involved: One of the most prominent functions of a currency is that it is a measure and store of value, and the Syrian Pound has lost many of these characteristics. Therefore, the entrance of a new stable currency will preserve wealth, stimulate commercial activity and stabilize prices.

It is expected that Turkey will benefit in a minor way from the circulation of the Turkish Lira in northern Syria due to the weak size of the Syrian market and consumers’ spending capacities. However, the currency circulation will further highlight its presence in the Syrian north. Based on Caesar Law, the United States of America ensures greater trading in the US Dollar, thereby achieving greater control and ability to measure the effects of the Law. Hayat Tahrir al-Sham has no real interest in shifting fully to using the Turkish Lira or the US Dollar as it benefits from speculative operations and the exchange rate differences as well as commercial operations conducted using the Syrian Pound. It is expected that expanding the use of the Turkish Lira and the reduced circulation of the Syrian Pound will result in the weakening of money traders, their resources and networks because they may not acknowledge such a shift.

Despite the recent moves to shift to using foreign currency, whether the US Dollar or Turkish Lira, achieving this shift will not be easy. In addition to the obstacles and the above mentioned reasons, there are purely technical issues related to the alternative currencies themselves concerning the availability of sufficient quantities of the currencies for circulation in the north, especially at the level of currency units for small retail operations, change, and the problem of controlling prices in accordance with the new currencies.