Democratic Union Party and the Syrian regime Partnership or conflict? 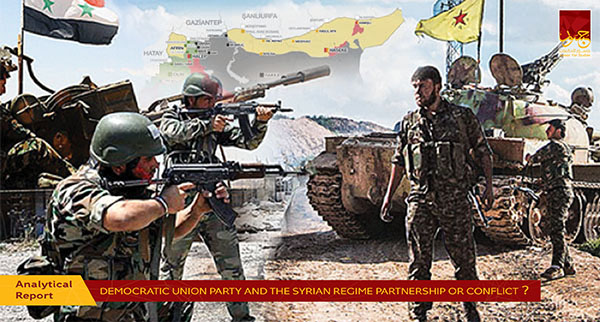 Democratic Union Party and the Syrian regime Partnership or conflict?

The relation between the democratic union party PYD, and the Syrian regime had several stages, and almost reached to the stage of break before the revolution, especially after AK party's rule in Turkey, and the improvement in Syrian- Turkish relations.
The Syrian revolution were a beginning for other new phase between the both parties, and it had several advantages for the both parties at local, regional and international levels.
The Syrian regime allowed party and its cadres to return to Syria in the beginning, after it was prohibited organization, and allowed it to take up weapons and declared its armed organization.
Then it turned into the phase of security and military partnership, where the parties did military campaigns jointly.
The party suppressed opponents of Assad in its areas, and confronted the demonstration against the regime.
But the relationship that began in taking care of a small group of homeless in the mountains began to take other forms in the next phase, the regime that began this relationship in 2011 as one of its pressure ways, was no longer able to dominate in most parts of Syria, and turned into a party from two parties which are almost equal in strength and its decision began to depend on for many foreigners’ actors. the party that entered into this relationship in 2011, looking for a place, became a feared military power, and became a partner of foreign actors, some of the supporters of the regime itself.
These variables raised the need to reconsider bases of these relations between the two parties, either that the parties go directly to a military confrontation, which will be harmful to the interests of them.
The party is not able to dispense with the economic, political and military care of regime, the regime is not able to dominate the Kurdish areas militarily and not able to bear high political cost of conflict into a high political cost by entering a conflict.
This report attempts to examine the reasons that helped both sides to build a relationship, including needs for the study of the relationship between the regime and the Mother party: PKK, the shape of the relationship and its complexity,  and tries to extrapolate the possible future of the relationship...