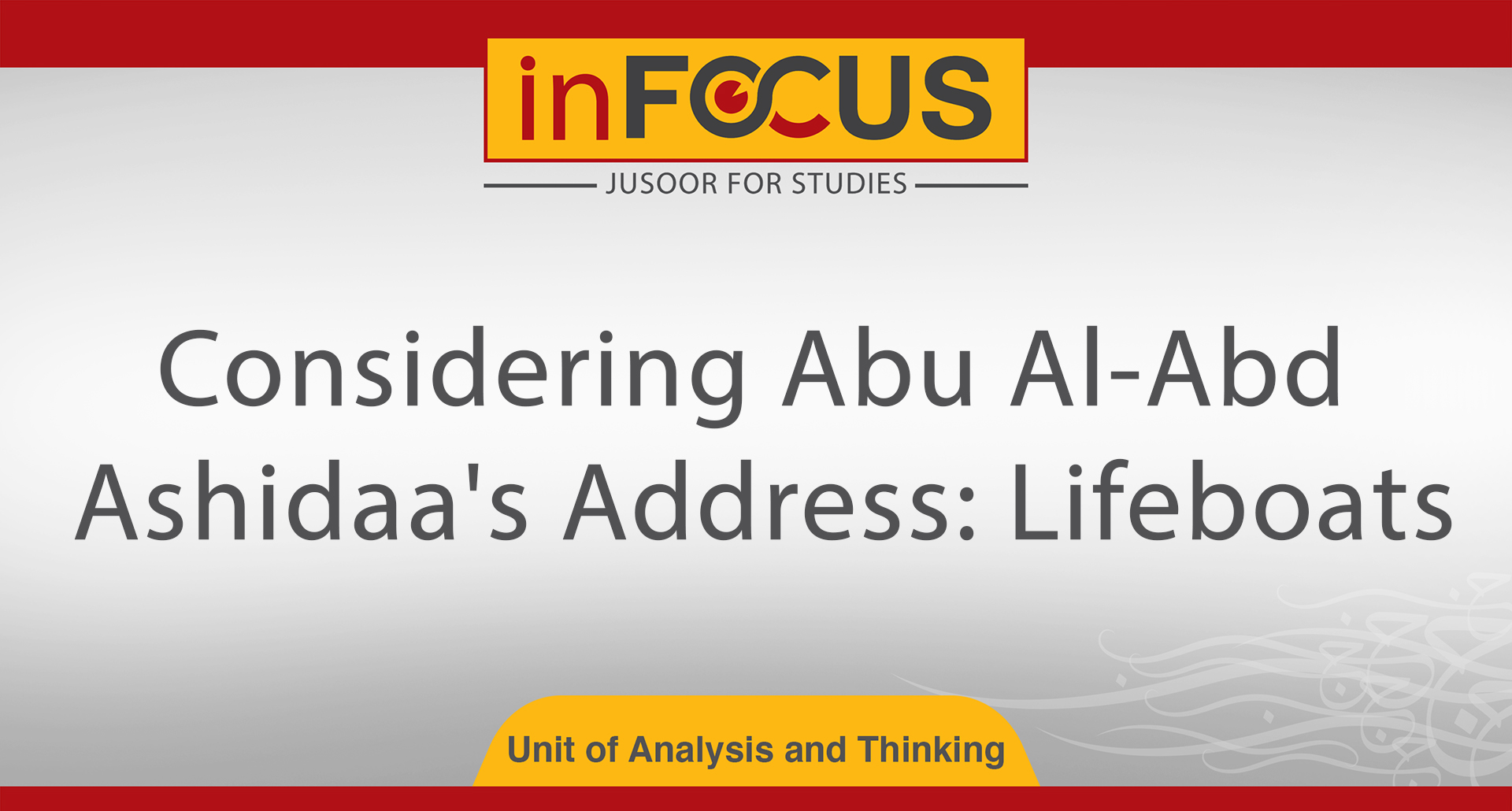 “Abu Al-Abd Ashidaa” had previously issued a video recording in September 2019 under the title “To Prevent the Ship From Sinking,” in which he warned that more areas controoled by the Syrian opposition factions would fall into the de-escalation zone due to the policies pursued by HTS.

In his new recording, Ashida addressed a number of points, blamed  Abu Mohammed al-Julani, the leader of Hayat Tahrir al-Sham for  military, security, administrative and financial corruption, the most prominent of which are:

1) "Al-Julani's objection to the plan to regain control of the city of Aleppo after it had been seized by the regime, causing the failure of the plan, which provides for infiltration from the neighborhoods of Jamyat Al-Zahraa and Al-Khaldiya neighborhoods through the main sewage channel, which has a diameter of 2.5 meters. Likewise, when the "HTS" stopped the digging of a large tunnel that would reach the city of Aleppo through the Al-Layramoun area, despite its length reaching 350 meters. Also, the repeated refusal to re-equip tunnels that had previously been used for infiltration and bombing operations.

2) The large, uncoordinated and sudden withdrawals from the western countryside of Aleppo during the military campaign in early 2020, which caused a widespread collapse in the ranks of the armed factions, especially since the redeployment took place in areas towards which Al-Julani himself warned that Aleppo would be in great danger if Nur al-Din al-Zinki movement retreats.

1) Al-Julani's admission that “HTS” ,previously Jabhat al-Nusra wasted more than $ 1.5 billion in 2014 via an audio recording.

2) The fuel pricing difference between HTS-controlled areas and the Euphrates Shield, which generates millions of US-dollars at the expense of the poverty-stricken population.

3) Reproduction of a large part of the laws of the Syrian regime, such as the application of the state property law No. 35, which is similar to the expropriation law No. 8 that allows ministries, departments, administrative bodies and the public sector to appropriate endowment properties for their projects, which is considered contrary to the laws of Islamic law.

1) The presence of more than 1000 summery executions that did not have proper procedures for prosecution or the rights of the detainees, not even recognizing the execution of many of them, refusing to issue death certificates for them and denying that many of them were buried in mass graves.

2) The arbitrary arrest and hundreds of enforced disappearance cases of prisoners, both women and men, and the use of torture, abuses and insulting methods against them.

3) Presenting offers to ISIS detainees to be released in exchange for being active in the Syrian National Army factions-held areas in the Euphrates Shield and the Olive Branch, including a case in which prisoners have been negotiated to bring their wives to keep them hostages to ensure that all of them will be forced to carry out the security operations for which Hayat Tahrir al-Sham provide all logistical equipment.

4) Secretly deporting ISIS detainees from Idlib prisons to the areas controlled by the US-led International Coalition in eastern Syria.

Obviously, Abu Al-Abd Ashidaa, who is trying to obstruct the efforts of Al-Julani to remove the “HTS” from the black lists of the terrorist groups by  damaging confidence of the members in al-Julani, especially as Ashidaa worked to compare the activities of “ HTS ”to Hezbollah, which is designated on the black lists and which was never a threat source to the United States, which in turn receives free services from "HTS" and its leader in the case of pursuing ISIS and Al-Qaeda members.

In addition, Ashidaa is trying via this very recording to undermine the media propaganda that "Al-Julani" seek to present, which relates to the absence of any violations in the prisons run by "HTS", because this is one of the main legal obstacles to removing the latter from the black lists, as well as the group does not constitute a threat for peace and international security.

On the other hand, it seems that Ashidaa is trying to reinforce the division between the Syrian National Army on one hand and Hayat Tahrir al-Sham "HTS" on the other, by blaming the latter for the insecurity in the areas of the Euphrates Shield and Olive Branch operations, and perhaps he hopes that this will contribute to deepen tensions between the two parties to the maximum extent.

It seemed that Ashidaa hoped to rally public opinion against "HTS" and its arm , the Government of Salvation, whether in terms of holding it responsible for high prices or almost completely implementing the laws of the Syrian regime, in addition to its role that had played in the fall of cities, villages and fronts; In an attempt to form a general impression that links all of this to the existence of ties between "Al-Julani" and one of the international powers.