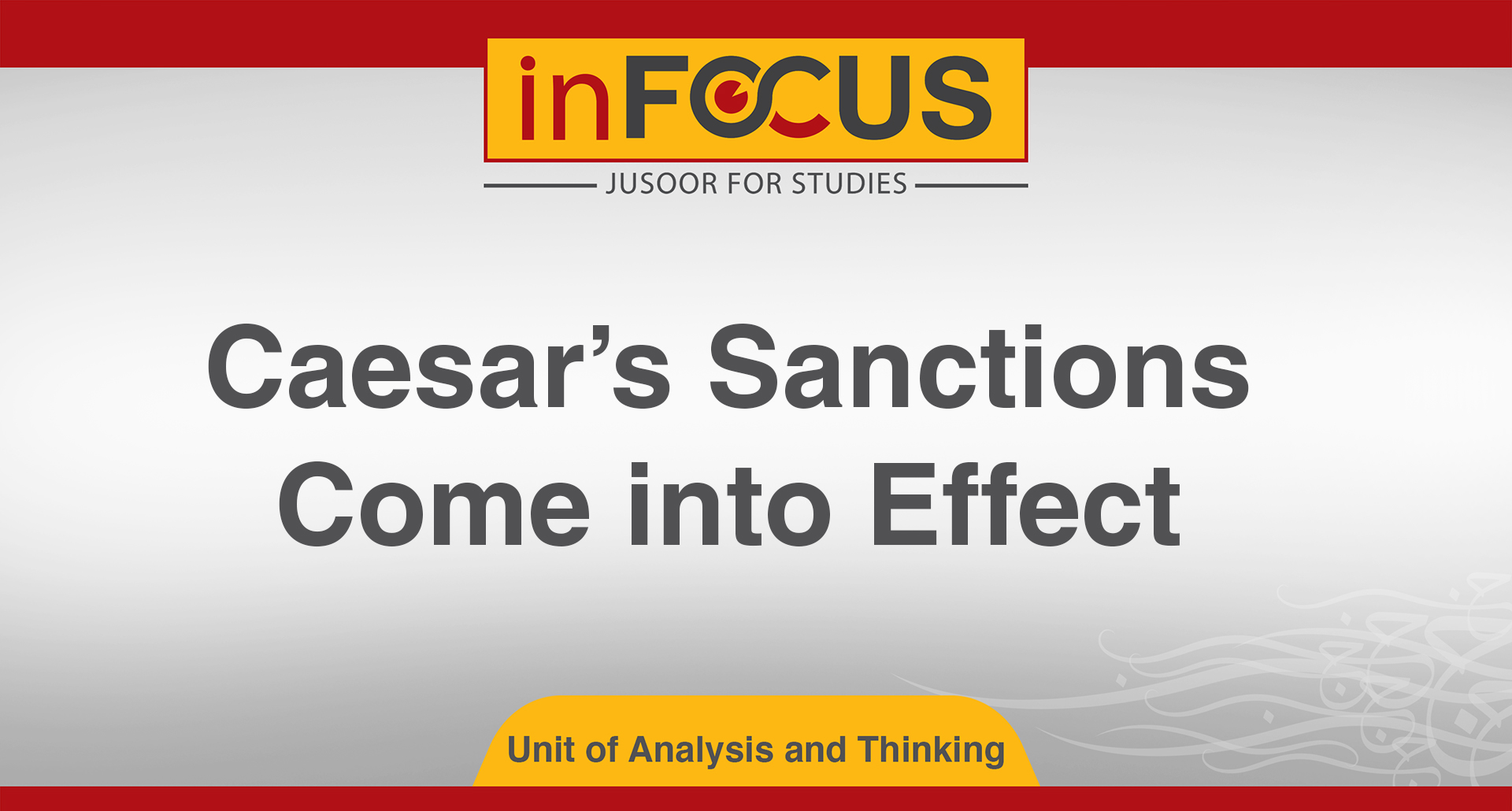 101
In Focus |Caesar’s Sanctions Come into Effect
After discussions in recent years, Caesar’s law came into effect on June 1, 2020. In the following, we clarify some points about this issue:
1- Caesar’s law is the first comprehensive sanctions law against al-Assad regime. No such comprehensive sanctions have been imposed previously, as Caesar’s law includes sanctions against al-Assad regime, its institutions, its members and those who deal with them. The law extends to foreigners who deal with al-Assad government or prominent regime figures who provide any kind of support, technical or material to the regime.
2- The law penalizes the entire axis that includes Russia, Iran, Hezbollah,  al-Assad regime, and its militias, and every foreigner who has military or paramilitary dealings on the Syrian soil with this axis.
3- The law deprives al-Assad and his government of any significant economic efforts, as the regime cannot do anything to invigorate the economy, and it will not be able to do so with its current capabilities without external resources. Based on the law, any cooperation with the regime in terms of significant building services, the supply of vital goods or spare parts for aircrafts and the like will be within the scope targeted by the United States. Banks across the world that monitor financial transactions for any type of international contracts will refrain from transferring the money and dealing with al-Assad and his government or those who deal with them.
4- Those who deal with al-Assad and his government will be deprived of the right to undertake international travel or move funds internationally. In addition, they will be denied from benefiting from any investments they have made within the United States of America or in any of its allied countries.
The law excludes humanitarian assistance provided directly to the Syrian people through international institutions and civil society institutions that carry out their operations in neutral manner to serve the Syrian people.
5- In its primary text, the law gave the regime government the means to stop and halt the application of the law. Briefly, to stop the application of the law, the regime needed to stop using barrel bombs, chemical weapons, missiles and explosives against cities and civil institutions, lift the blockade of any village or city that contains Syrian civilians, release the detainees, and give the right to international organizations to visit prisons to ensure detainees have been released. In addition, the regime government must allow the safe, voluntary, and dignified return of Syrian refugees who want to return and hold accountable the perpetrators of previous crimes against civilians.
The Importance of the USA Enforcing the Law Emerges in Four Major Ways:
First: The sanctions come after years of attrition, in which the al-Assad regime drained its financial resources and capabilities by deploying its forces across Syria and incurring major costs.
Second: Disagreements within the ranks of the al-Assad regime, especially in the economic class, such as those seen so far with the regime’s biggest supporter, Rami Makhlouf.
Third: The comprehensiveness of the sanctions, as they extend beyond the al-Assad regime, to include everyone who deals with the, and allow for comprehensive monitoring operations, which makes it possible to target any person, institution or governmental or non-governmental body, whether Syrian or foreign, al-Assad may try to use.
Fourth: The regime’s allies are under pressure, as the Iranian economy is also facing difficult conditions and harsh sanctions; Hezbollah, which is involved in economic and political conflicts in Lebanon, suffers from near total paralysis; while Russia is exhausted by the effect of the Corona virus, the decrease in price of Oil, and its continuous spending in Syria for many years.
Unit of Analysis and Thinking - Jusoor for Studies
To visit the English Telegram channel: Click here