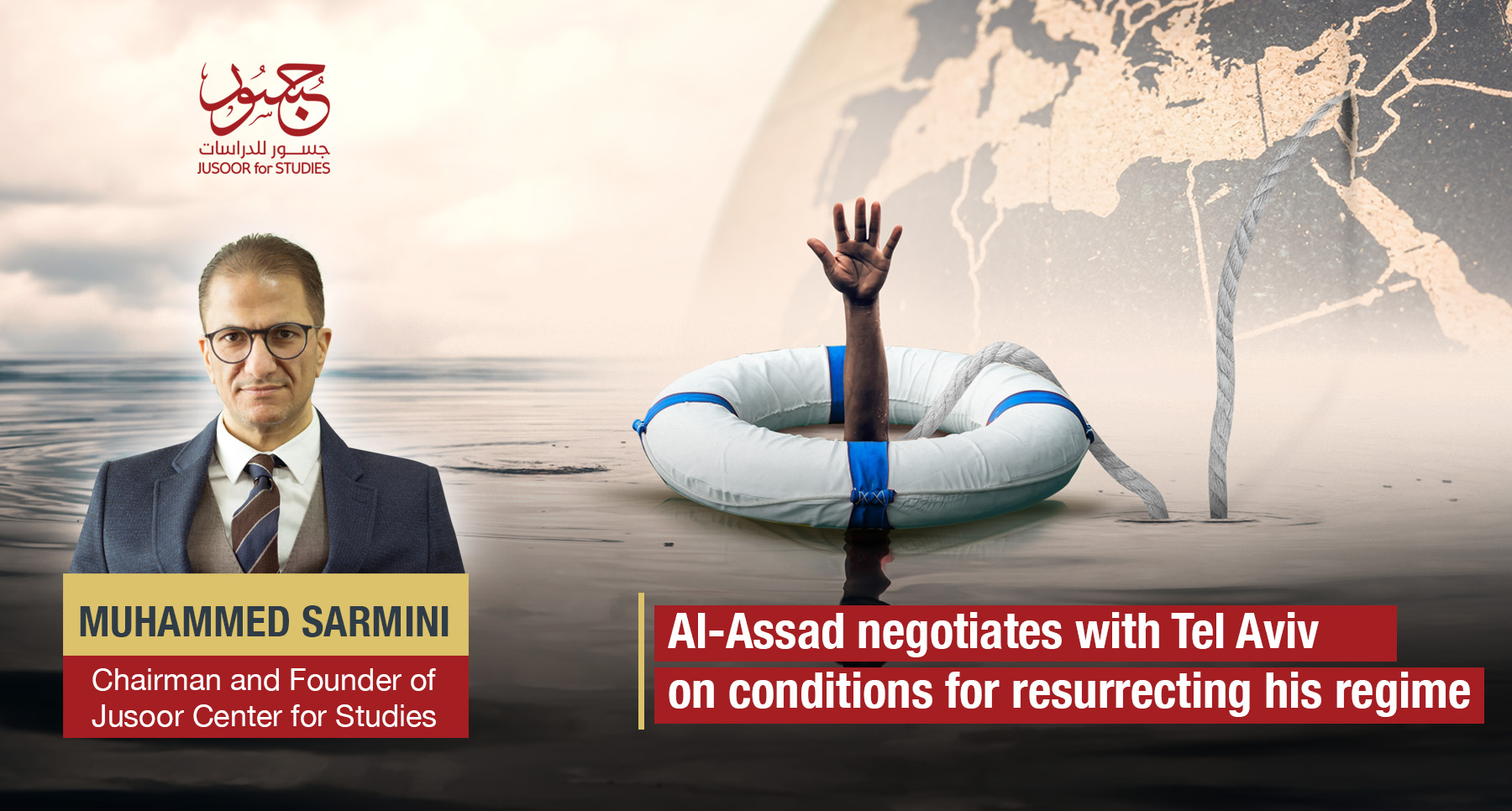 MUHAMMED SARMINI
Chairman and Founder of Jusoor Center for Studies

In December 2020, a meeting was held in Russia's Hmeimim military base that brought Bashar al-Assad together with an Israeli security official, reliable sources told Jusoor Center. The sources added that the head of the Syrian National Security Bureau, Ali Mamlouk and his special advisor for security and strategic affairs, Major General Bassam Hassan attended the meeting from Syria, while from Israel, both General Gadi Eisenkot, former chief of the general staff of the Israel Defense Forces (IDF) and former General of the Mossad, Ari Ben-Menashe were in the meeting. Alexander Tchaikov, commander of the Russian forces in Syria as well as Russian military officials and intelligence officers also attended the meeting according to the sources.

In this meeting, Al-Assad presented several demands, most notably the return to the Arab League, and financial aid to pay off the Iranian debt which consequently opens the door to expel Iran from Syria, support him to stay in power, restore relations with the Sunni Arab axis, support Syria economically, stop the implementation of the sanctions imposed on Syria topped by the Caesar Act.

In return, the Israeli side demanded dismantling the so-called "axis of resistance", the complete removal of Iran from Syria, the expulsion of the Lebanese Hezbollah forces and all foreign militias from Syria, the formation of a government in parity with the Syrian opposition, the complete restructuring of the Syrian security establishment and the military as well and rejoining the defected officers with a Russian-American-Israeli guarantee.

However, although this initial meeting did not result in specific agreements, it marks the start of a path towards which Russia strongly strives to establish, and it is believed that it will witness a great expansion in 2021, as Russia considers that building a direct relationship between the Assad regime and Tel Aviv can be a lifeline for the regime that might support the latter's efforts to obtain international accreditation for its project for a political solution in Syria.

Peace with Israel represents an ideal solution for the Assad regime to get out of the state of diplomatic and economic siege that it has been in for nearly ten years, which means to get more decades in power, unless another popular explosion erupts or unpredictable circumstances arise in the future.

Undoubtedly, Israel, for its part, would welcome official cooperation by the regime and transforming their relationships, which lasted for nearly half a century, into a more formal stage and it realizes that this regime is the right choice for its security compared to any actor that Syria has experienced during the past ten years, which prompted it over the past decade to prevent the regime from falling in any way.

For its part, Iran is aware that Bashar Al-Assad's regime has been desperately searching for ways to return back to the international system, which helps it getting rid of the Iranian and Russian restrictions, or at least one of them, and therefore Tehran seeks to obstruct the regime's efforts, and before that, to block the efforts being undertaken and planned by Russia.

Tehran realizes that its ability to effectively put pressure on Russia is very limited, and it also knows that the Assad regime’s relationship with it is purely pragmatic, and therefore it does not count on the respect of the two sides, Russia or the Assad regime and doesn't expect that they might fulfil commitments they had made, but rather seeks to accelerate the process of getting deeper roots in the structure of state and society in Syria, that makes uprooting it by any party, including Russia and the regime itself, extremely difficult but certainly not impossible.

Al-Assad's meetings with the Israelis can explain the recent Iranian rhetoric, presented by the spokesman for the Iranian project in the region, Hassan Nasrallah, at the end of December 2020 in a lengthy televised interview, where Nasrallah sought to personally implicate Bashar Al-Assad, talking about "transferring technology and weapons to Gaza," in order to remind Al-Assad that he was a full partner in the Iranian project, and that he would not be able to withdraw from this project as smoothly as he imagined.

Nasrallah also reiterated in the end-of-year messages which came after holding the meeting of Hmeimim that Iran prevented the fall of Assad, not the Russians, as if he wanted to say: It is Iran, that protects the regime today, not Russia, and it is able to breach its security at any time.

It seems that the year 2021 will be full of developments regarding the Russian-Iranian conflict inside Syria on the one hand, and the efforts of Russia and the regime to build bridges of confidence with Tel Aviv on the other hand, which will be directly affected by the way the new US administration will deal with Tehran and its regional project, especially in Syrian.

Despite many analysts believe that Washington will work to revive the nuclear agreement with Tehran as a priority in the American approaches in the region, there are no indications that Washington is in a hurry in this regard, in fact it neither has an interest in protecting the Iranian presence in the region or keep this presence outside the negotiation.

It seemed that the Israelis have prepared well for Biden's arrival through two tracks: The first is to raise the pace of direct targeting of Iranian interests, inside and outside Iran, and the second is to launch political initiatives with the actors, whether with the Russian side through the reintegration of the regime into the international system through the path of normalization, or with help of Arab parties have recently had public normalizing relations with Israel, in order to offer financial and political alternatives to Al-Assad and encourage him to cooperate with the Israeli proposals.

It is unquestionably true that if Damascus entered the path of normalization, it could encourage Western capitals to turn the page on the past and re-consider the international and national sanctions, which will open the door to Assad’s rebirth, based on deep international legitimacy this time, without the need for exploiting the Palestine question, without even being subjected to pressure to release the detainees in the Palestine Branch's prison or any elsewhere!

It seems that the lessons of recent months were enough to push Al-Assad to go willingly to Hmeimim, as Sudan’s lesson was sufficient to convince every single sanctioned or isolated government by the international community that the key word to getting out of the sanctions hell to the “heaven” of international acceptance is in Tel Aviv, a lesson perhaps many sanctioned regimes in the region will seek to take advantage of it in 2021.