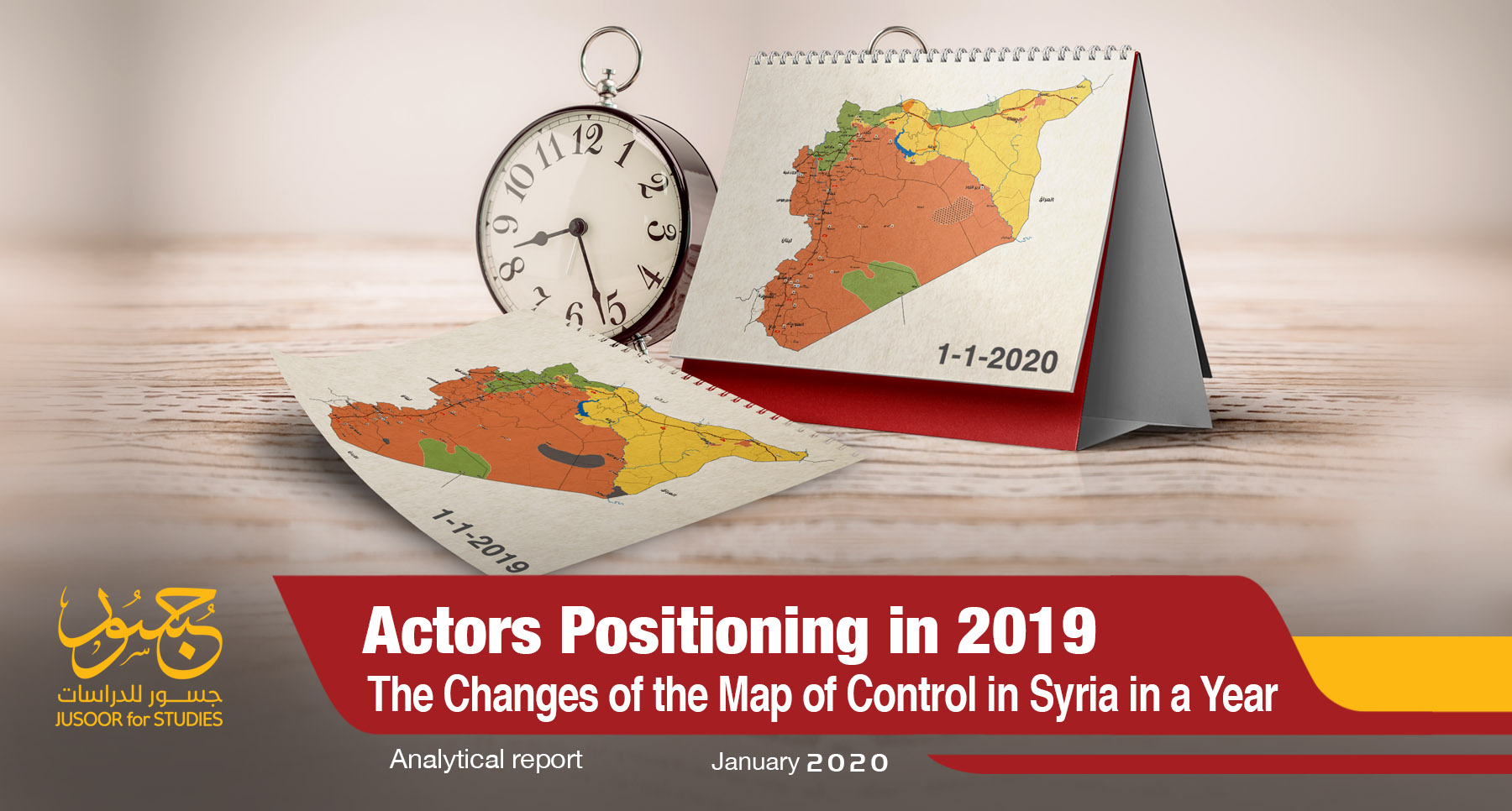 Introduction
With the start of 2019, the Syrian opposition was due for internal fighting between the National Front for Liberation and Hayat Tahrir al-Sham (HTS) with HTS making every effort to expand its control over key areas of control. The internal struggle weakened the opposition’s military resilience at a time when it was anticipating a possible campaign to take its last strongholds in the north of the country.
With the start of the Syrian regime ground campaign backed up by Russia and later Iran, the opposition factions were able to slow down the attack and increase its military cost. However, they were unable to stop it completely especially with HTS’s lack of desire to participate effectively. HTS did not see any usefulness in being heavily involved in the fighting in light of other future entitlement that it might face to survive and maintain its gains.
The Syrian opposition is now facing a major challenge when dealing with the future of HTS since it can neither fight it nor can depend it on HTS for effective military cooperation to achieve a change in the field regarding the map of control and influence. Overtime, the Syrian opposition factions have become convinced that it is futile to rely on the Turkish observation points to curtail any military attack or campaign that the Syrian regime or its allies may launch. All of these factors perhaps contributed to the Syrian opposition pushing to unifying its gains and military achievements in the areas of Turkish military presence. This can be seen in the National Front for Liberation’s move to join the Syrian National Army.
In the case of the regime, 2019 presented opportunity to continue expanding its control in the field in the north considering the inability of the Sochi Agreement (2018) to subject the buffer zone to the regime’s control or influence. The situation was not different east of the Euphrates where the regime took advantage of the Syrian Democratic Forces (SDF) situation following the United States of America (USA) announcing withdrawal of its forces from northeastern Syria along the border.
In 2019, the SDF faced the biggest challenge since the foundation of the Self-Administration by the Kurdish Democratic Union Party (PYD) in 2014.
Likewise, ISIS faced further decline in military activity and organizational leadership.
This report will examine the changes in the control ratios of the actors on the ground and the impact of these changes on the military and political positioning in 2020. 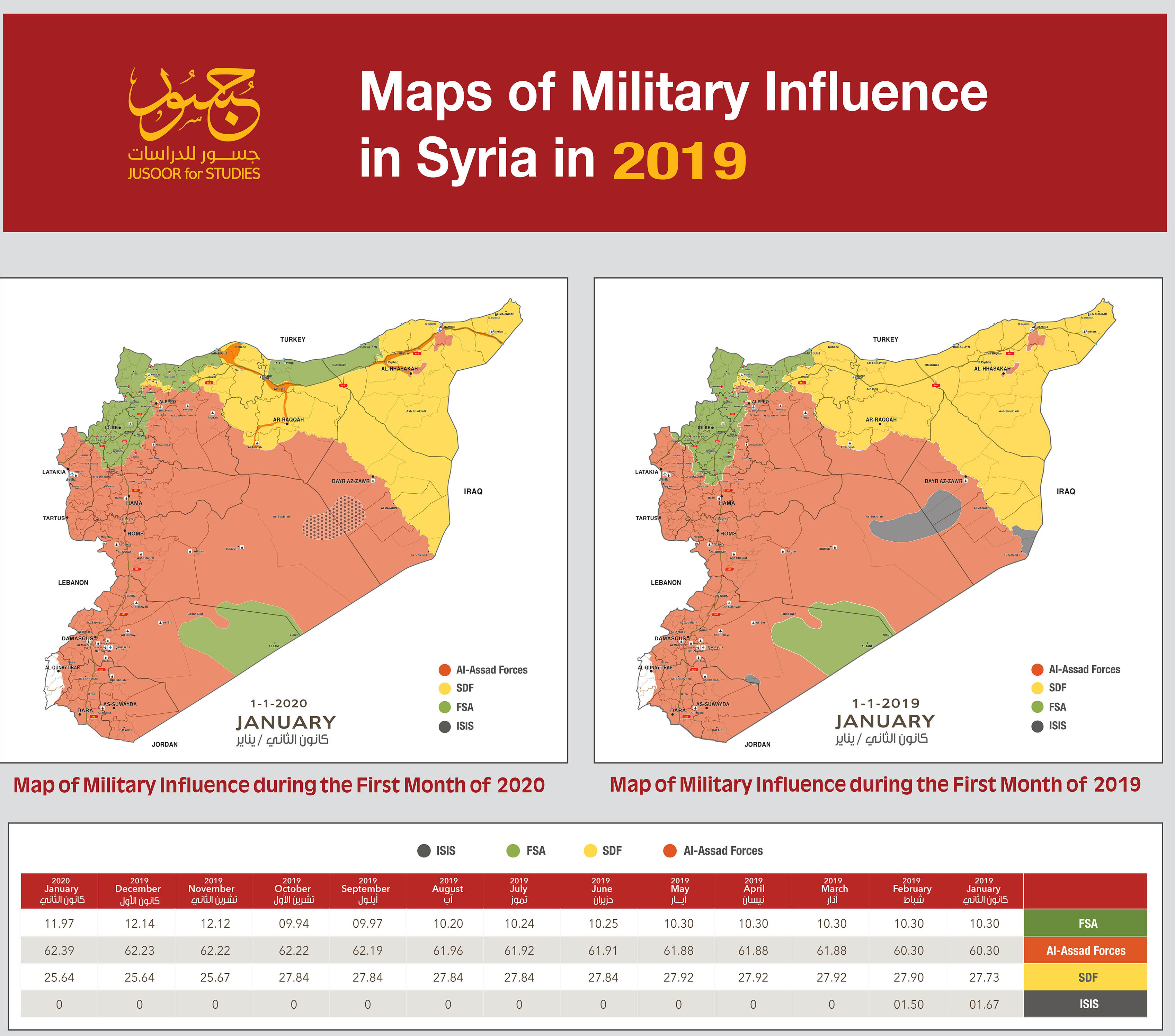 Second: Indications of Transformation in the Map of Control
The major changes in the map of control and influence affected local actors, albeit primarily due to issues concerning foreign funding and intervention. Therefore, the gains that have been achieved are considered power cards for the funding countries and are reflected in the ramifications on local actors.
1) The Syrian Regime
The Syrian regime, and what it represents for the Russian-Iranian alliance, increased its field expansion to become the biggest winner in 2019. Thus, the regime enhanced the results it achieved in 2018 by taking control of two thirds of the country.
The Syrian regime adhered to its desire to regain control of the whole country and managed to enter the eastern region which it had lost complete control over since early 2013. Moreover, the regime sought to expand control in the de-escalation zone north of Syria.
While the regime was seeking to achieve additional military victories at the expense of other actors, Russia was seeking to turn the achievements in the field, that it has brought about since its intervention in Syria, into political gains. However, Russian efforts in this regard were not fruitful whether at the level of the Constitutional Committee, reconstruction or repatriation of refugees. Consequently, the regime’s expanded control and influence poses a major challenge for Russia rather than a sustainable achievement, as long as it is unable to turn these into a political process that Russia sponsors or a process that Russia accepts to secure its strategic and vital interests in Syria. Without this, the regime’s achieved control in the field and its desire to advance further may turn into a burden for Russia especially in terms of stability, which was highlighted by the reconciliations model during 2019.
2) The Armed Opposition Factions
In 2019, the Syrian opposition, and what it represents of an alliance with Turkey, managed to restore balance to its presence in the map of control and influence.
The opposition’s fighting in the de-escalation zone demonstrated that the opposition has a reasonable defense ability compared to its performance in previous years where it suffered consecutive defeats. This can be seen through Russia and Iran having to enter official, contracted or auxiliary ground forces to fight in battles after the Syrian regime forces failed to achieve effective gains in the field.
Turkey would not have preserved a ceiling of gains suited to its existence and interests with respect to the remaining the actors involved in the Astana process concerning Syria, had it not been for the field resistance shown by opposition factions in the de-escalation zone during the third military campaign, as well as their combat effectiveness in an organized military framework during the Spring of Peace operation.
However, the armed opposition factions’ effective military performance does not counter its complete inability to adopt responsible or relatively independent policies at the military, security, and political levels. The National Army’s structure continues to function without being subject to any military, security or administrative government that would shift it from a faction to an institution. Becoming an institution would entail the Army becomes liable, accountable, and subject to oversight, especially in the event of violations by individuals and groups, and, in turn, prevents the international community from attempting to illegally classify the National Army or one of its formations. In addition to the possibility of removing the political and security cover from the Army in the event of unreasonable changes in relations among international actors.
3) Syrian Democratic Forces
In 2019, the SDF was lost the most to regime and the armed opposition factions. These losses were predicted developments due to political events at the end of 2018.
The SDF failed to translate field victories into political gains that guarantee they achieve their demands or part of them, despite the military cover the USA was providing them under the pretext of fighting ISIS. On the one hand, the SDF was not included as a party in the Constitutional Committee and, on the other hand, Washington abandoned providing protection for the SDF following Turkey declaring the launch of the Spring of Peace operation.
Although the Kurdish protection units, which constitute the mainstay of the SDF, sought to provide them with military and political cover by trying to reach an agreement with Russia and the Syrian regime, but even the agreement entails a loss for the SDF to other actors in the field. The agreement moves the SDF from the circle of control and enhancing its field gains to preservation and solely ensuring its survival. As such, preserving its existence is the highest ceiling it can achieve in the next stage at the least estimate.
4) ISIS
In 2019, ISIS activities aimed at attempting to provide suitable conditions for its continued presence at the security level. The activities sought to cause losses for the remaining actors in the field after ISIS became external to the win-lose equation in 2017 and failed to return to the field of influence by controlling some pockets of territory. 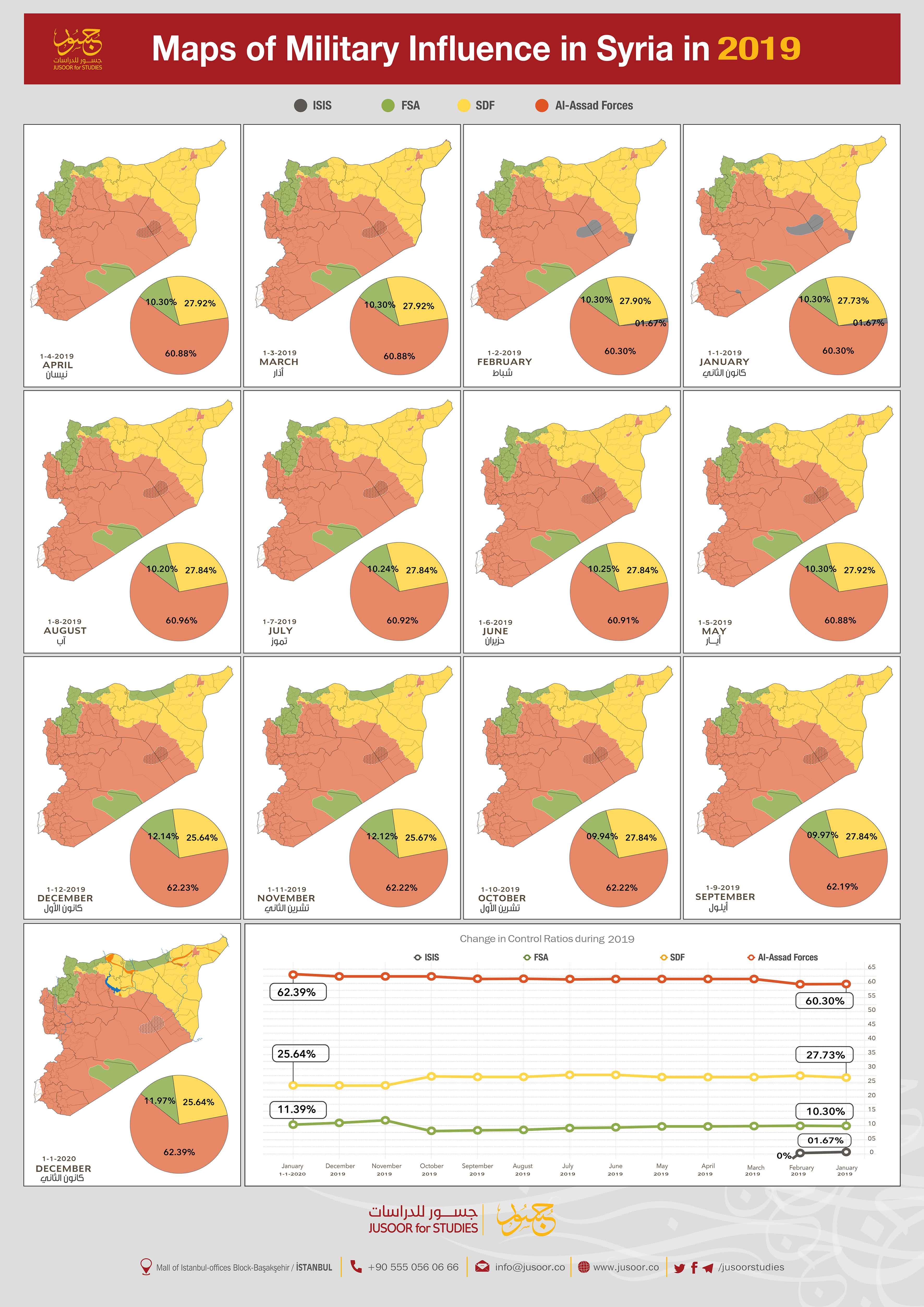