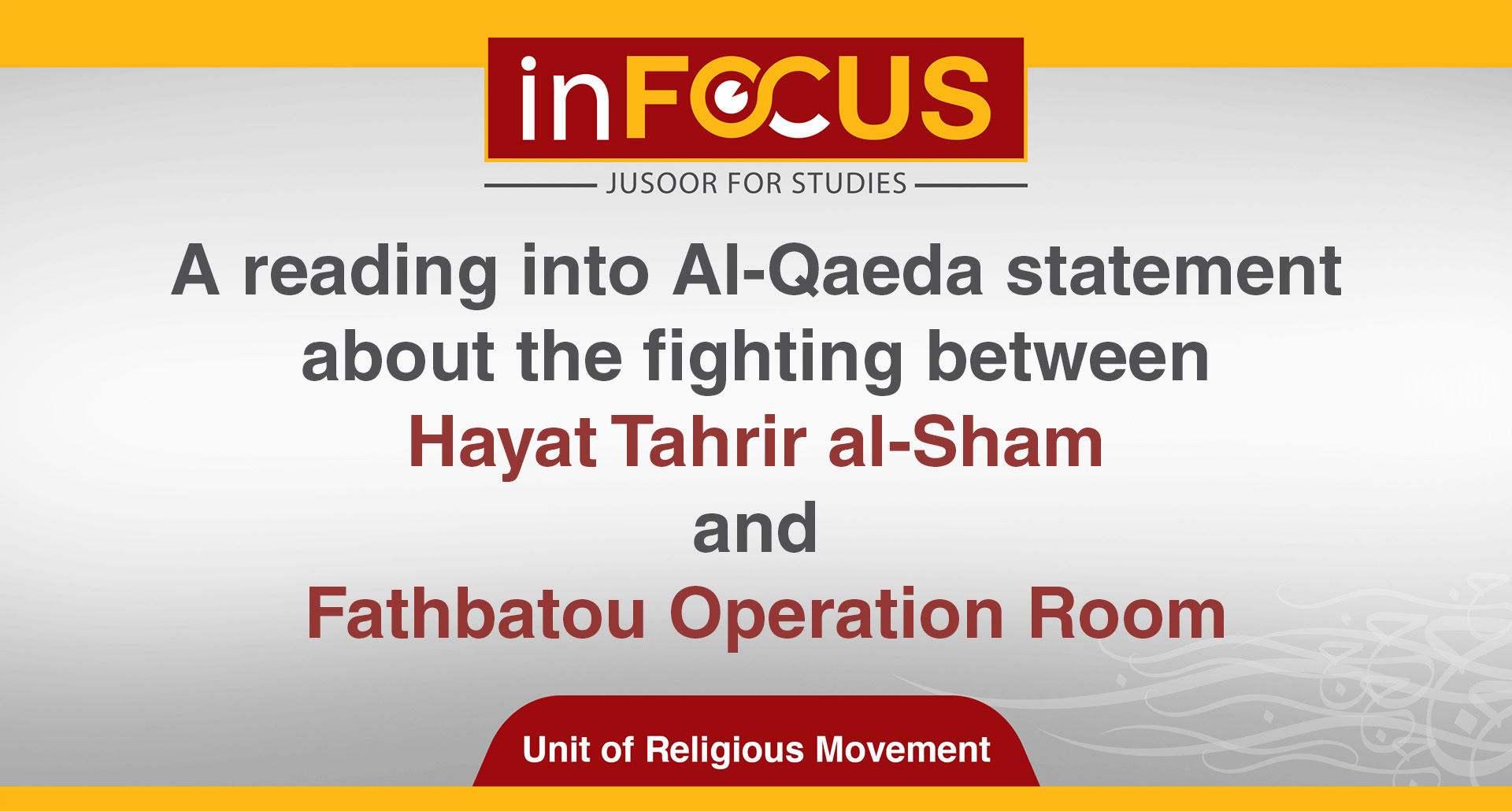 98
In Focus | A reading into Al-Qaeda statement about the fighting between Hayat Tahrir al-Sham and Fathbatou Operation Room
Al-Qaeda General Command released a lengthy statement on June 24, 2020, following the escalation of the dispute and later the military confrontations between Hayat Tahrir al-Sham (HTS) the jihadi organizations affiliated to Fathbatou (Hold out/Resist) operations room.
The statement addressed several issues such as the separation from HTS, the formation of new operating rooms or factions. In addition, the statement stressed several points, the most prominent of which are:
• The illegitimacy of HTS’s interpretation of al-Bayaa (pledge of allegiance) texts and commitment to the group, especially since HTS itself defected from al-Qaeda and preferred to go after its own self-interests and created a separate body in its structure and strategy from the organization that Abu Muhammad al-Jolani had formerly pledged allegiance to.
• The right of leaders and individuals to separate from HTS and form new factions of their own, after discharge is granted if there is any.  In this context, the statement based its judgements on issues that are considered to be juristic axioms, such as the sanctity of the blood of Muslims both individuals and groups.
• The prohibition of defeating one formation over another to prevent division and although unity is a divine obligation, according to the statement, but it is contingent on the fulfillment of a set of conditions such as the existence of a state that governs by Sharia and building trust between factions and organizations.
The statement also raises questions about the extent of the ability of al-Qaeda to exploit the accumulated incidents to rebuild its popularity in the region - whether it has a social incubator or prominent religious figures - and support the formations and figures close to it against HTS and its leadership.
Practically; The statement tries to de-legitimize HTS and ultimately blame it for intransigence in dealing with other formations that are still related to the original organization.
On the other hand, the statement confirms there are some leaders and elements in HTS who owe loyalty to the ideas and approach of al-Qaeda and commit to follow its directives. Therefore, the statement sends a message to HTS leadership that al-Qaeda is fully informed on the course of events, people and balances within the body and its ability to push these elements and leaders to separate from HTS.
Unit of Religious Movement - Jusoor for Studies
To visit the English Telegram channel: Click here