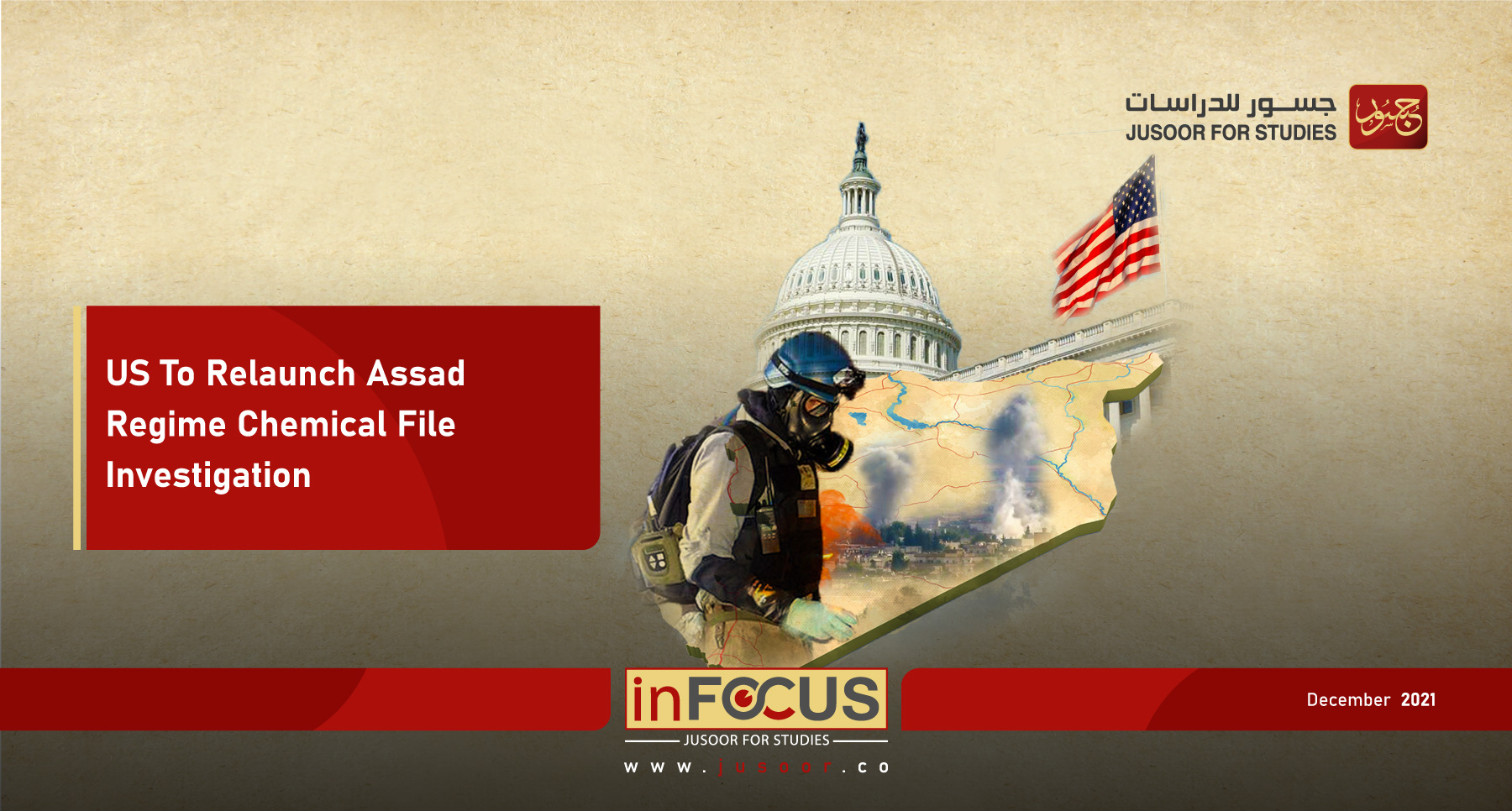 Once again, the United States brought the file of using and making chemical weapons by the Syrian regime to light, unveiling a tranche of sanctions on a dozen Syrian regime's officials accused of serious human right abuses. Also, details about air strikes targeting secret facilities have been revealed by the United States.
On December 7, 2021, the US Treasury announced a set of sanctions targeting five officials of the Syrian regime's intelligence apparatus, most of whom are air force officers, in addition to former officials of security branches.
One of the key officers who is being blacklisted is Muhammad Khadour (Khadour), who is a Major General in the Syrian Air Force (SAF), currently in command of the 22nd Air Division. Khadour is being designated because while he commanded the 30th Brigade of the SAF at Dumayr Airbase, airstrikes from the airbase against Eastern Ghouta dropped chemical barrel bombs throughout the area, killing civilians. Besides, On April 7, 2018, an attack on Eastern Ghouta launched from Dumayr Airbase, which was still under the command of Khadour, included at least two chlorine barrel bombs and a guided missile attack on a humanitarian facility, rendering it inoperable and killing dozens of civilians.
Moreover, Muhammad Youssef Al-Hasouri (Al-Hasouri) is also being designated. He is a Major General in the SAF in command of the 70th Brigade at T-4 Military Airbase, who was the commander of the 70th Brigade stationed at T-4 Airport in April 2017, when the city of Khan Sheikhoun was attacked with sarin gas from the same airport.
"Israel carried out two secret raids, targeting military facilities belonging to the Syrian regime - not Iran, amid signs that Syria was attempting to restart production of deadly nerve agents," The Washington Post reported on December 13, 2021. In addition, Israeli security sources mentioned the real objectives of the operation, saying: “Its purpose is to keep Syria from restarting its production of deadly nerve agents.”
Concerning this case, its ramifications, and the timing within which it is being relaunched, several prospects can be taken into account that could make the regime motivated to restart the production and use of chemical weapons:
1- Seeking to find an alternative path that guarantees curbing Iranian influence, in anticipation of not reaching an agreement with Iran in Vienna, where the United States is trying in the current talks to insert new terms to the agreement. The new terms the US is seeking to impose are related to framing Iranian activities in the Middle East and addressing the Iranian ballistic missiles program, which would come in line with the interests of allies, topped by Israel and Saudi Arabia.
Accordingly, it is likely that Washington looking forward to having multiple alternates in case the negotiations fail, which requires creating pretexts to expand the scope of Israeli and American strikes later on Syrian targets under the “implementation of UN-Security Council Resolution 2118,” and this will push Russia again to negotiate about Iranian influence and chemical activities on Israel’s borders.
2- Fear of the return of efforts to manufacture chemical weapons in Syria, and consequently using them by Iran against Israeli interests. In this regard, unveiling the strikes might be a prelude to later internationally justified strikes against targets linked to the production of chemical weapons by the regime, based on reports saying that Iran has been using the "Al-Tha'ala" military airport, southern Syria, to produce chemical weapons in coordination with the regime, at a time Russia turned a blind eye to transferring shipments of "sarin gas" from Iranian territory to southern Syria.
3- Putting pressure on Russia to show more seriousness in curbing Iranian engagement in Syria, including its commitments towards implementing the UN-Security Council Resolution 2118 issued on September 27, 2013.
Undoubtedly, reopening the Syrian regime’s chemical weapons file, whether using them previously or making them currently in Syria can obstacle Russian efforts to rehabilitate the Syrian regime, and also hinder the efforts of some Arab countries seeking to rehabilitate Syrian regime, so that it would rejoin the Arab League before the next Arab summit in March.