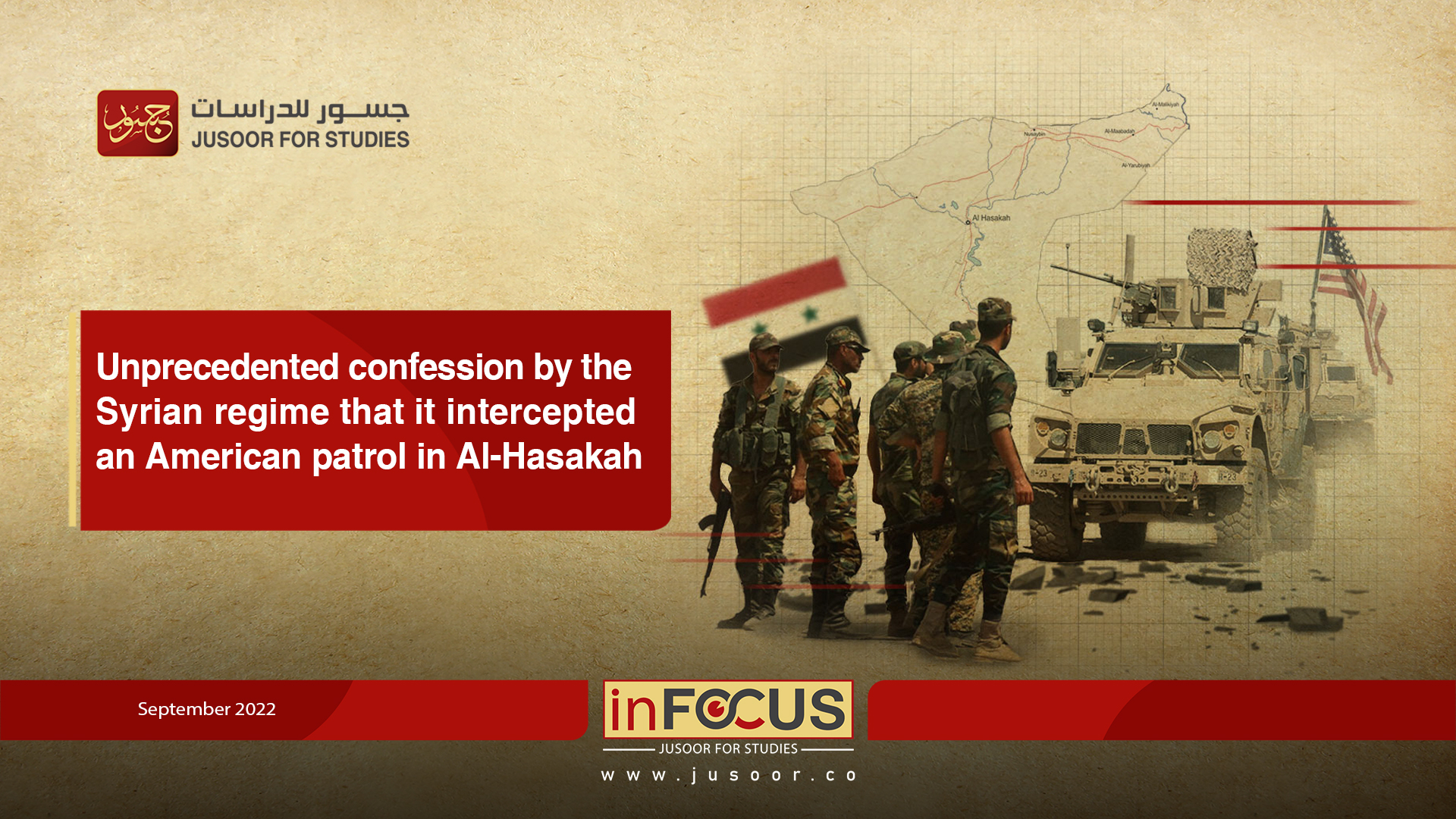 On September 13, 2022, a regime checkpoint blocked the way of a regular American military patrol, heading to the "Mansif" area, south of the city of Qamishli in northeastern Syria. This made the patrol make a U-turn and change destination. No clashes between the two parties were reported.

Although it is not the first incident of interception against the American patrols, carrying out such an action by the regime forces alone without any participation of loyal civilians in addition to announcing this matter officially is an unusual behavior by the regime. Previously in similar incidents, the regime's media used to report that the residents of the neighboring areas are the ones responsible for doing so, even though it is sometimes reported that some members of the regime forces participated.

Moreover, it is the first time the regime announces that such a hostile action comes within the framework of the tasks entrusted to its forces; meaning that it is not accidental or unplanned. However, it seems that such deeds might occur habitually and would be a part of the routine activities of the regime forces deployed in northeastern Syria in the next stage.

It goes without saying that such an interception incident is considered a provocative act that could provoke intense reactions by the American forces. If such acts are repeated; however, clashes are highly possible between the two parties, just as had happened in a similar incident carried out by a checkpoint of the regime forces in the countryside of Qamishli in mid-August 2020, which resulted in the killing of a number of the regime personnel after being targeted by American helicopters.

Such an incident could not happen without clear orders or at least an approval by Russia, as it is the international guarantor of the regime's commitment to de-escalation and cessation of hostilities. Russia might resort to such a tactic in an attempt to show that it is able to respond to Turkey's demands for the withdrawal of US forces from Syria for greater effectiveness in counter-terrorism operations.

Getting US forces out of Syria is a common point among the Astana guarantors. Such a discourse is repeated in any official statement coming from Astana meetings, whether in presidential or delegations levels.

It seems that Russia is trying to convince Turkey that the regime is able to combat terrorism only if the US forces leave Syria first. Accordingly, the regime's continued provocative actions against US forces could contribute to renewing the call for their withdrawal from Syria in the hope to spearhead the tasks of combating terrorism as the only party that has legal sovereignty.

Parallel to that however, the increase in provocative actions against the American forces east of the Euphrates may push the United States of America to blame the SDF for allowing the regime and its allies to expand their activities in the region. This position by the SDF might hinder their forces missions in combating terrorism, especially when it is the party responsible for facilitating the regime forces entry to the region.

Even if such actions against the American forces continue, it is unlikely that the regime would engage in direct hostilities against them, given the imbalance of power and armament between the two sides.  Despite the above-mentioned fact, the regime will not hesitate to execute the orders of its own patrons (Russian and Iran) in carrying out similar actions in order to make it very expensive for the US if it decides not to keep its forces in Syria. This could be an achievable goal especially if the regime also gives a helping hand in the security operations that are being implemented against the US-led international coalition east of the Euphrates, which are believed to be facilitated by the Iranian militias.