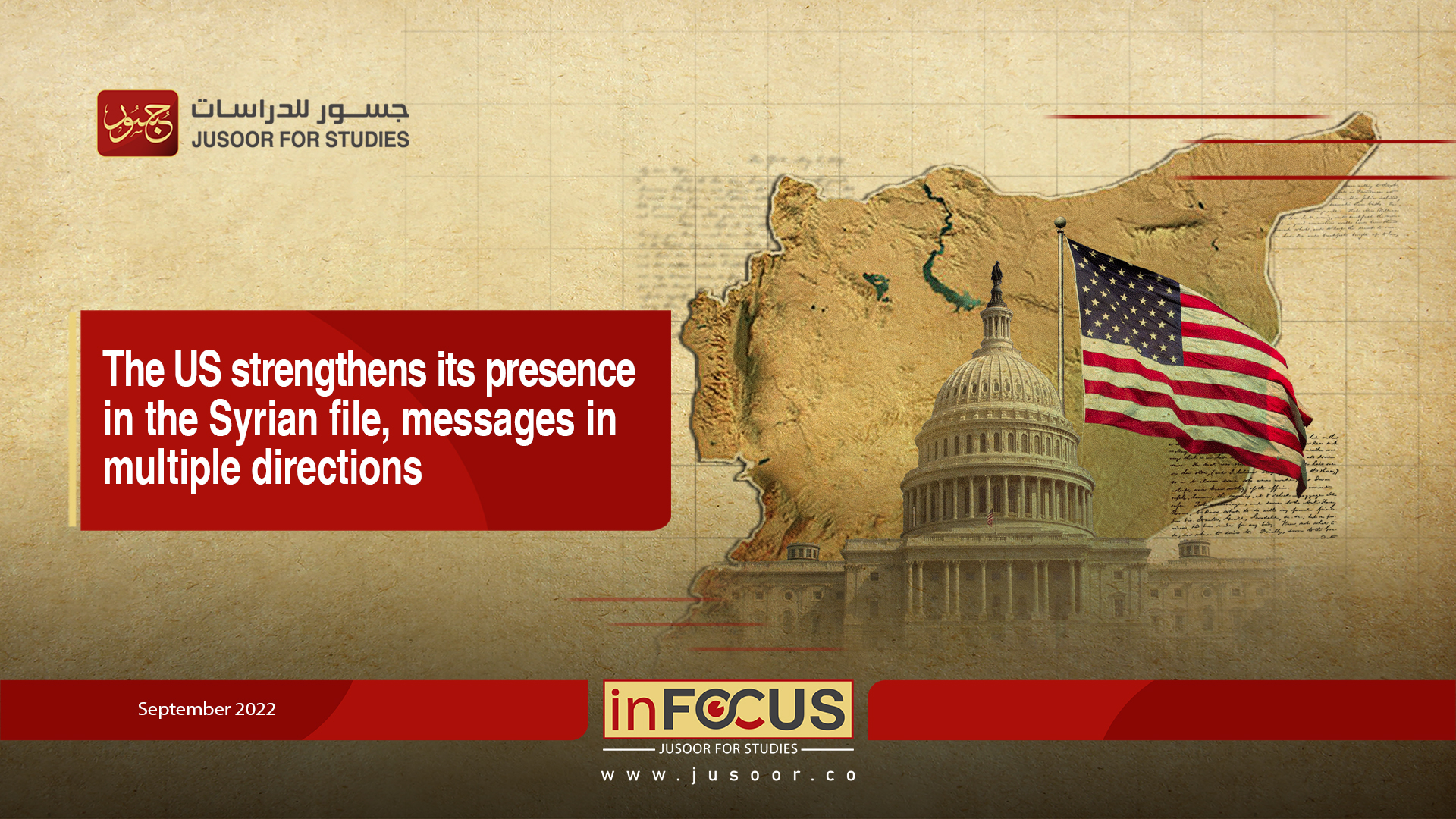 The United States of America has intensified efforts it has been making in the Syrian file over the past months. It has taken a series of steps, in which it reaffirmed its presence as a major international actor in Syria.
Considering the period of time that extends from the beginning of the Russian invasion of Ukraine in late February 2022 to the Tehran and Sochi summits in August of the same year, it could be found that the United States is following a growing trend in its military and political activities.

Strengthening the military presence:
On September 4, 2022, the US troops established a new military point in the village of Naqara in northeastern Syria, which consists of 3 sites of the US-led International Coalition in the Qamishli region.
A new military point as such can contribute to monitoring the increased activities of Russia and Iran in the region; especially it directly overlooks the Russian forces-run air base at Qamishli Airport. It is only a short distance from the Iranian military sites south of the city.
In fact, the establishment a new military site for American forces in Syria may be an indication that the United States has given up withdrawing from the region in the short and medium terms. Earlier, it had worked on reducing the number of its troops and military sites in Syria since the end of 2019.
It is noted that the US-led international coalition forces conducted joint - and unprecedented - exercises on September 8, with the Syrian Democratic Forces (SDF), south of Al-Malikiyah, northeastern Syria. This is an additional indication of the US desire to reassert its military presence in the region.
This would send messages to Russia about the nature of military cooperation between the international coalition and the SDF; because Russia is trying to undermine trust between the Americans and the SDF on the one hand and strengthen the Russian-SDF relations on the other. This appeared obviously when joint exercises were conducted by the SDF and the regime forces, which were supervised by Russian officers at the end of July.
That will be added to the fact that Turkey will see the exercises that to be conducted jointly by the SDF and the American forces as a disappointing move. Such a step not only contradicts Turkey's continuous calls on the US to put an end to its cooperation with the Democratic Union Party (PKK), but also it gives the Kurdish People's Protection Units (PYD) confidence in protecting its main supply route between Syria and Iraq through the Fashkhabur area and its surroundings. This very route is targeted by Turkey during Operation Claw-Lock February 2022.
In parallel to that however, US planes carried out 9 air raids on Iranian militia sites in Deir ez-Zor, eastern Syria on August 23. In mid-July, the commander of the US Central Command, Lieutenant General Michael Corella, visited the Al-Tanf base on the Syrian-Jordanian border. He met with the commander of the Jaysh Maghawir al-Thawra (Revolutionary Commandos Army), stationed in the "55-kilometer area".
Of course, this is a clear message to Iran that any US military escalation against its militias in Syria is not linked to the nuclear negotiations. In this way, US also send positive signals to the Arab Gulf states and Israel, which has recently increased the size and quality of the targets bank it is bombing in Syria. This often happens in coordination with the United States, which will consider this cooperation an affirmation of trust between the two parties (Israel and the US), which will not be affected by the nuclear agreement if any.

Strengthening the political presence:
In late August 2022, the United States participated in a meeting on Syria in Geneva that included representatives of 11 Western and Arab countries in addition to Turkey. It was also attended by the members of the Syrian Negotiations Commission. The meeting found that it is quite important to reaffirm that any political transition in Syria must be immediate and in accordance with United Nations resolutions, specifically 2254 (2015).
This meeting differs from the other ones those are often held by the Small Group on Syria to renew the position on the political process. Convening this meeting in Geneva comes after Russia’s call to move the headquarters of the Constitutional Committee meetings to a place other than the Swiss capital. Russia also considers that the tripartite Astana formula is the only international formula that currently underway, which is actively contributing to the Syrian settlement.
This meeting conveys a message to Russia that reads: the United States is ready to support a new international formula in order to contribute to sponsoring the political process alongside the United Nations’. As such, it would prevent any further efforts that might lead to a monopoly on sponsoring the political process through Astana or any other track that Russia may work to establish by itself without any participation of the Western countries.