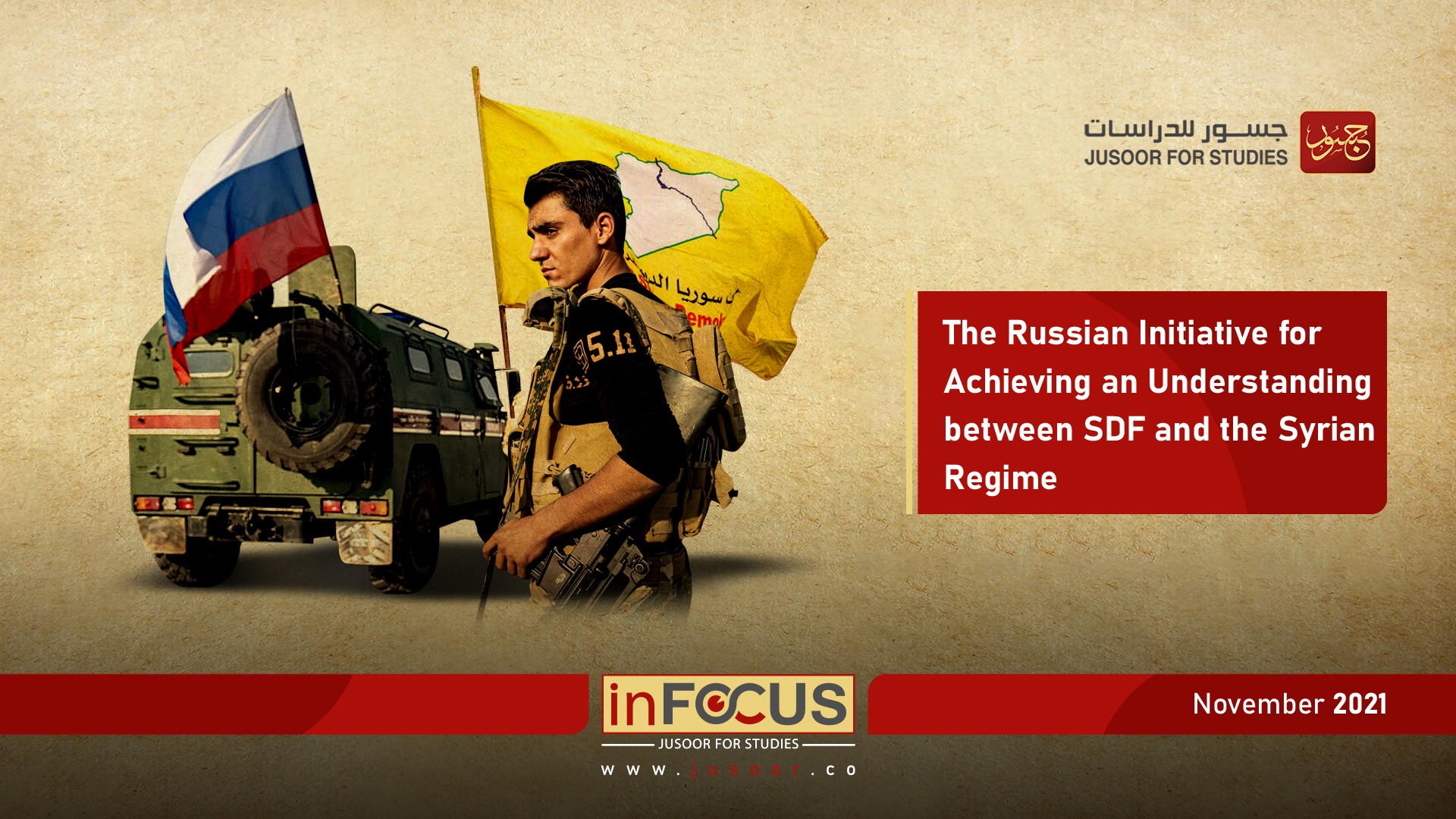 In early November, the Russian committee in Damascus received an official response from the Syrian regime that it did not agree to the Russian initiative regarding the future of the Syrian Democratic Forces (SDF) in the eastern and northeastern region of Syria, after consultations during October 2021 between the Russian committee and officials from both SDF and from the Autonomous Administration, it ended with the initial approval by SDF and its administration on the Russian initiative without conditions or reservations.

The Russian initiative is based on containing the military forces of SDF within the command of the Fifth Corps, civil administrations to resume acting under agreed powers, provided they abide by the law of local councils in force in Damascus, and allowing the parties of the Syrian Democratic Council (SDC) to work politically in Syria after obtaining administrative and security licenses according to the parties’ law in force in the government of the regime, while ensuring the facilities of these licenses from the Russian side.

In its response to the Russian Committee, the Syrian regime affirmed its rejection of the principle of collective settlements, welcoming the allowing of individual settlement procedures, weapons handovers, and the re-establishing the local administration councils based on what is in place in the regime’s government, with the possibility of discussing the work of political parties after fulfilling their necessary licenses.

The Russian initiative comes at a time as Russia seeks for getting the outcomes as a result of the great pressures that SDF is experiencing following the US political and military withdrawals from Syria, and with the increase in Turkish threats to launch military operations as well as the occurrence of major divisions and disagreements within the structure of SDF, especially after the repeated Turkish-led operations against leaders of the Kurdistan Workers’ Party (PKK) in Syria and Iraq under the Turkish-American understandings.

We can consider the attitude that SDF has on the Russian initiative as a preliminary but not a final approval, noting the flexibility in the consultations, but at the same time, there are parties within SDF and within the Autonomous Administration affiliated with PKK that do not agree with such a matter principle.

Also, the regime’s refusal is the first answer to this initiative, which is affected by parties inside the regime's Republican Palace and among the security branches' commands those who are affiliated with Iran, which does not suit the Russian cautious position against repeating the experience of holding settlements had taken place in southern Syria.

In view of the current facts, several scenarios for the fate of the Russian initiative and the nature of the relationship between SDF and the regime might be built:

1. Scenario One: The initiative’s success: Under serious pressure could be put by the Russians on Damascus, and if Russia figures out mechanisms to implement the initiative by relying on the National Security Office and the Fifth Corps and their influence within the regime’s government. However, before that there should be a supportive regional and international environment, specifically the acceptance of international and regional parties -headed by Turkey- those have a lot of interests and leverage in the Syrian file.

Despite this scenario assumes the continuation of the initial acceptance by SDF, but there are great challenges and within SDF that must be taken into account.

2. Scenario Two: Making amendments to the initiative: where Russia is forced to partially respond to the regime’s conditions to suit Russia’s interests in north and northeastern Syria, and these conditions are not easy to impose on SDF, and in this case the SDF’s loss in favor of the regime would be greater, while Russia could make advantage of the process of interaction by all parties within the regime with the implementation of the initiative, which makes it is possible to achieve the percentage of control that Putin referred to in his last meeting with Assad.

3. Scenario Three: Unresponsiveness of the parties: so that the challenges within SDF could result in divisions that do not enable SDF itself to make concessions to the regime, especially in the issue of decentralization, disbanding the formations and handing over weapons. Consequently, the regime might continue to reject the collective settlement that does not fit with the structure of the regime based on strong centralization and non-compliance in full security control. Accordingly, there would be an appropriate opportunity for Russia to get leverage on Turkey in many files in exchange for Russian approval of Turkey’s military operations against SDF, and this will constitute new pressure and weakening the internal structure of SDF that will force it to acquiesce more to Russia and in turn to the regime. Actually, this very scenario is very close to what happened previously in Afrin.

In conclusion, the biggest loser in the future is the project of the Democratic Union Party (PYD), and it is aware of this and therefore remains in constant confusion and divisions that prevent it from making meaningful concessions at the time. After that, changes may force PYD to make major concessions without a price, which is because of the nature of the separatist project the party's cadres adhere to. Of course, this is internationally and regionally rejected, let alone at the internal level within the ranks of SDF itself.

While the regime does not accept any changes in the way it understands governance and manages resources, and this is what suits the Iranian project in the region, while it is forced to respond to Russian changes in a limited and temporary way, which are changes based on Russia's interests in the region, and with the rest of the local and regional parties.