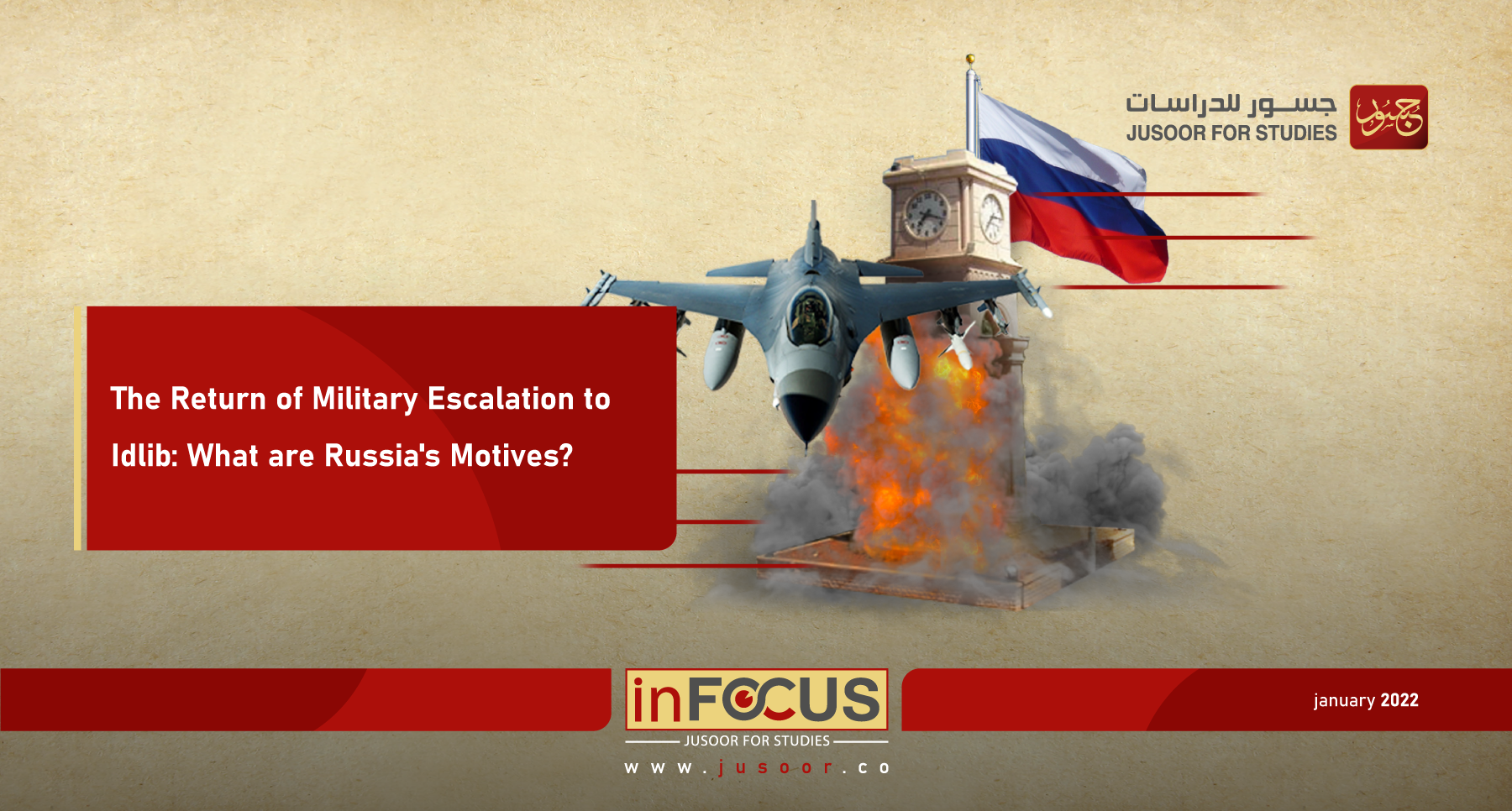 The intensity of escalation and violations has risen again in northwest Syria, after the noticeable decrease that it witnessed during the month of November 2020; The de-escalation zone has been subjected to artillery, missile and aerial bombardment targeting civilian, military, and economic facilities since March 2020.
Recently, Russian warplanes launched raids on areas near the border strip and in Jabal al-Zawiya, south of Idlib, while the Syrian regime forces and Iranian militias carried out artillery and missile strikes on several points west of Aleppo, killing and wounding a number of civilians.
In response to the escalation, the Turkish forces deployed in the vicinity of the city of "Ariha", southwest of Idlib, on January 1, 2022, carried out focused artillery strikes on military targets belonging to the regime forces and their allies in the areas of "Maarat al-Numan" and "Saraqib".
It is noted that the re-escalation coincides with the end of the authorization period of the mechanism for bringing humanitarian aid into Syria under Resolution 2585 (2020), while it seems that Russia is trying to pressure the international community to accept limiting the mechanism to aid across the lines of contact; especially since the report of the Secretary-General of the United Nations stressed the need to continue the flow of aid across the border.
Or at the very least, Russia wants to ensure the continuation and acceleration of work under the exceptions for early recovery stipulated in the UN resolution; thus, reducing the size of the sanctions against the regime, which was indirectly indicated by the Russian president ‘s Special Envoy Alexander Lavrentiev, on December 27, 2020.
Furthermore, the reason for the continued escalation in northwestern Syria is also due to Russia’s dissatisfaction with the slowdown in implementing the road map that was agreed upon with Turkey during the “Sochi” summit between Presidents Recep Tayyip Erdogan and Vladimir Putin on September 30, 2020.
However, the lack of any progress in implementing the road map on Idlib is linked to the existence of differences and pending issues between Turkey and Russia, most notably:
• Combating terrorism; Russia wants to establish a joint security and military mechanism to confront the designated organizations in northwestern Syria.  Thus, it insists on the resumption of joint military exercises in this framework, which were carried out in 2020, while Turkey wants to maintain only intelligence and security coordination, not military.
• Turkish military presence; Russia insists on the redeployment of Turkish forces in Syria at a depth of between 30 and 35 km from the border strip, while reducing the number of military points and the size of equipment, after they exceeded what had been agreed upon in the Astana talks.  This is to be done within the framework of amendments to the "Adana" Agreement (1998) and in coordination with the Assad regime.
• Activating the movement of trade and transport; Russia insists on the full implementation of the provisions of the Moscow Memorandum (2020), which provides for the establishment of a security corridor of 6 km on both sides of the international road (M4) between Aleppo and Latakia.  On the other hand, Turkey still wants to reach a mechanism of action and coordination that guarantees its participation in operating and securing the international road (M5) between Aleppo and Damascus.
• Stabilization; Where Turkey insists on imposing a comprehensive cease-fire in Idlib, making the truce sustainable or long-term, as the case is in the areas of northern Aleppo and Raqqa. Such a mechanism guarantees the return of refugees and displaced persons to their cities and villages and prevents further influx of migrants into Turkey.
It does not seem likely that the intensity of the escalation would decrease at least in the first quarter of 2022; especially with the passage of two years since the signing of the Moscow Memorandum (2020) on Idlib, and it The exchange of resentment and warning messages are however expected to continue  with the aim of pressure, but without necessarily any change in the map of control and influence.