The recent escalation in Daraa after 6 months of the settlement agreement: Indications and repercussions 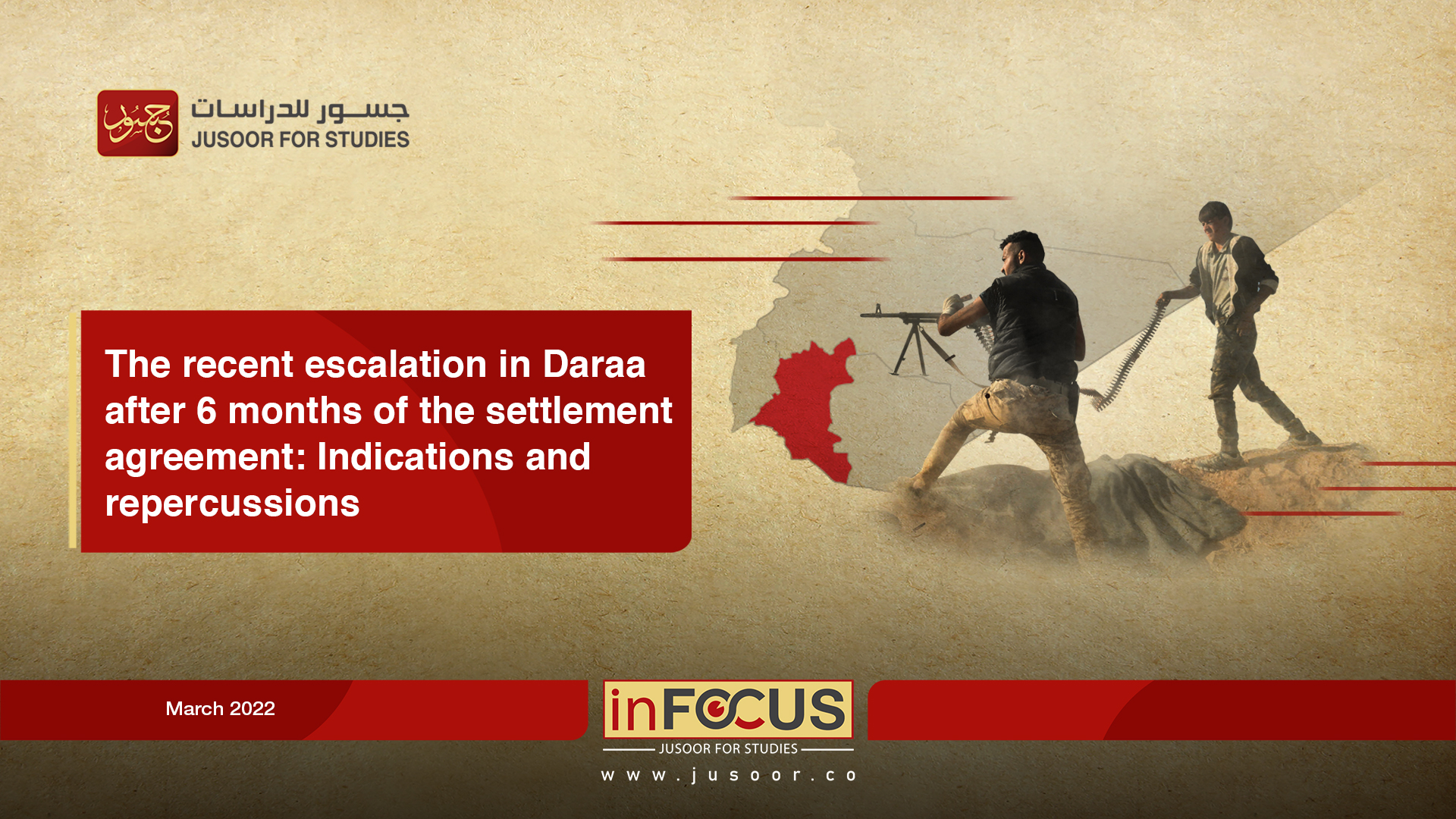 The recent escalation in Daraa after 6 months of the settlement agreement: Indications and repercussions

116
The recent escalation in Daraa after 6 months of the settlement agreement: Indications and repercussions

On March 15, 2022, Daraa witnessed a new field escalation; during the attempt by the security services of the Syrian regime to raid a neighborhood of Jassim city in the north of the governorate.

This attempt was accompanied by clashes erupted with former fighters of the armed opposition factions. The confrontations resulted in the killing and wounding of a number of civilians, in addition to an officer and several members of the regime's State Security Branch, and some vehicles were damaged as well.
Local notables of the region and the regime's security committee rushed to contain the conflict and avoid escalation; in order to prevent the region from sliding into large-scale confrontations. Accordingly, the two sides agreed, during a bilateral meeting, to return to calm after releasing the detained regime forces, handing over the bodies of the dead, and cancelling the operation.
This escalation comes 6 months after the Central Committee in Daraa and the Security Committee signed a new settlement agreement under the auspices of Russia, stipulating the non-prosecution of wanted persons, the return of defected soldiers to their service centers without being held accountability, and the handing over of light and medium weapons after inspections by the security forces accompanied by notables and dignitaries.
Although the escalation in Jassim city has ended, it has many indications, most notably:
• The regime’s insistence on continuing the security approach that aims at restoring full sovereignty over Daraa governorate, via re-establishing a State monopoly on weapons and violence and permanently disarming the area while neutralizing all personalities who oppose that, either through liquidation or arrest.
• The continued weakness of the regime’s military and security capacity in Daraa, while all the successive settlement agreements and the clauses they included providing for the handover of weapons did not contribute to restoring the sources of power and authority over the governorate. This is apparently demonstrated if we look at the ability of former opposition fighters to use weapons and target the regime's forces and reinforcements, apart from the ability of the Central Committee to impose conditions that prevent the spread of detachments and checkpoints in many cities.
• The regime was keen not to slip into military confrontations, which might result in unwanted unrest and chaos for neighboring countries. This appears as part of the commitments made by Russia to international actors in the file of the southern region, such as Jordan and Israel.
In any case, it does not seem that the regime may be satisfied with the results of the escalation that occurred in Jassim, and may be preparing to respond later, especially since it will not accept notables and dignitaries as a watchdog over the security force during the raids; Because this undermines the regime's ability and goals to arrest members and leaders of the former opposition factions, who have become a real threat to it.