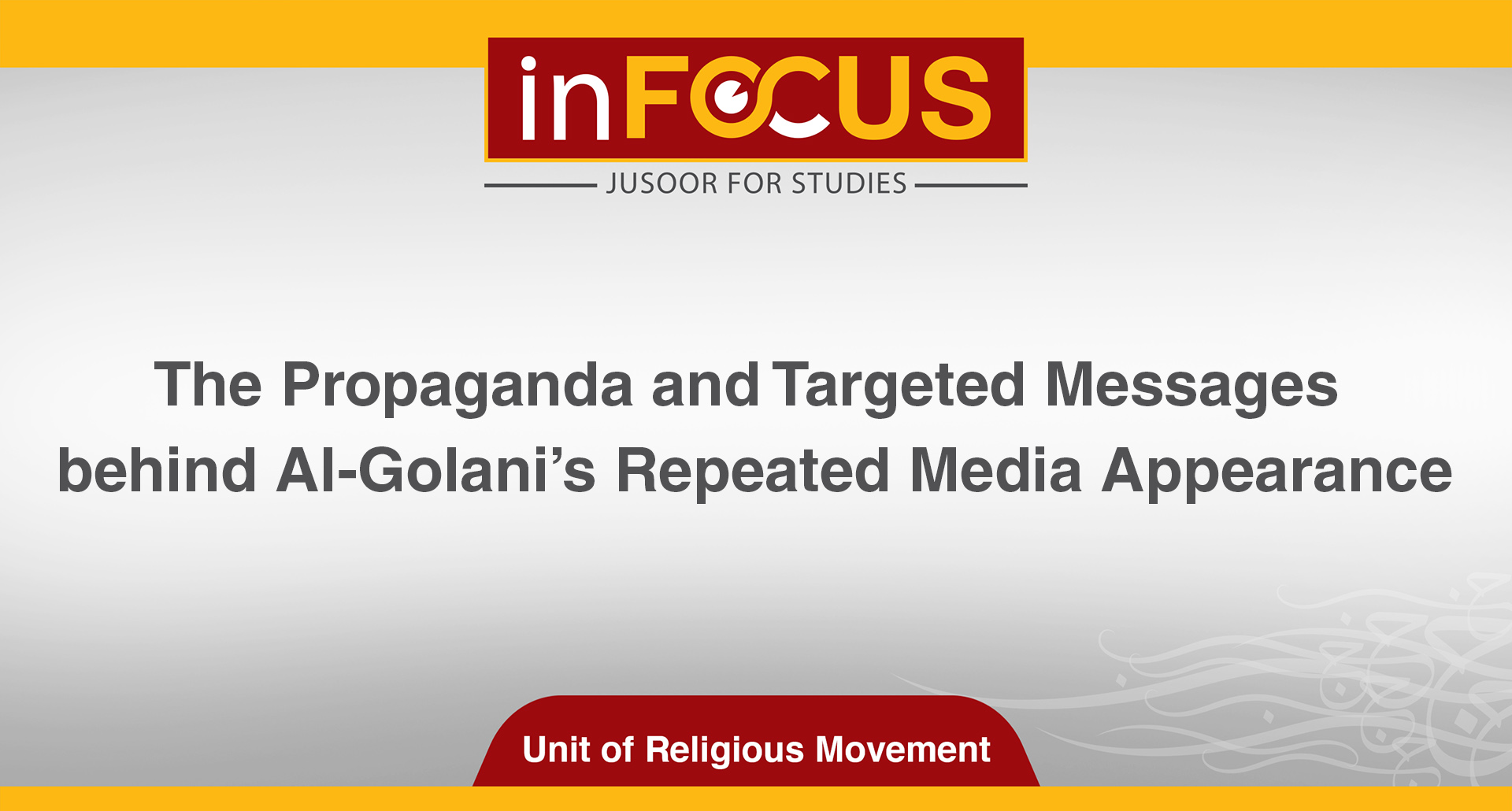 103
In Focus | The Propaganda and Targeted Messages behind Al-Golani’s Repeated Media Appearance
Hayat Tahrir al-Sham (HTS) increased their social activites in May in an attempt to address the extensive criticism of HTS opening commercial crossings with the regime and steering the Dignity Sit-in on the M4 highway to its own self-interests. In this context, HTS publicized different social meetings and media appearances of its leader Abu Muhammad al-Golani on several occasions. The latest was his visit to the IDP camps and his meeting with the liberated captives. In addition, al-Golani visited some children and gave them Eidiye (money given to children during Eid Holidays) in a move similar to what charities and civil society organizations did.
Al-Golani recurrent appearances concurred with HTS restructuring of its body organizationally, HTS reinforcing the Red Bands Forces and tracking down “thieves and corrupts” and a dispute with Hurras al-Din in Arab Said village.
Most of HTS regular activitie are not suprising; however, the media campagin promoting al-Golani’s activities is unusal since al-Golani meets regurarily with miltary figures from the factions, bussiness figures and with Salvation Government Officials, al-Shura Council and with clans’ prominent figures.
HTS promotion of these meetings following the recent demonestrations and disputes can be read as follows:
• Presenting HTS as a “democratic body” to counter its accusation of being a tyrant body.  Furthermore, HTS tried to depict that the leadership carries a great deal of responsibility and hence the meeting with all parties and taking their opinion.
• Showing a different side to the leader since rumors say he hides from people and does not care about them. Thus, through his repeated appearances, HTS was trying to promote a new image of the “leader” who is close to people, visits the camps and tries to help people, plays and guides children, and approaches the clans as one of their own.
• Selling HTS as part of social and revolutionary activities and part of the IDPs and that it is different from the extremist organizations whose leaders do not get involved with the community and engage with the social issues.
Naturally, whether HTS will announce it or not, the fact is, HTS is trying to keeps pace with the next stage by adapting to the next stage requirements. These requirements can possibly be the cessation of military actions and working on a political solution; therefore, it is paving the ground for al-Golani to be an accepted future leader or politician since he is the de facto leader of the most important powerful organization in the region.
Still HTS attempts to change its image will have a limited impact, and will not achieve much when it comes to external actors, especially as it has not been accompanied by actual changes in its organizational and intellectual structure and HTS is still classified as a terrorist organization.
Unit of Religious Movement - Jusoor for Studies
To visit the English Telegram channel: Click here