The Kurdish Factions and Forces in Syria 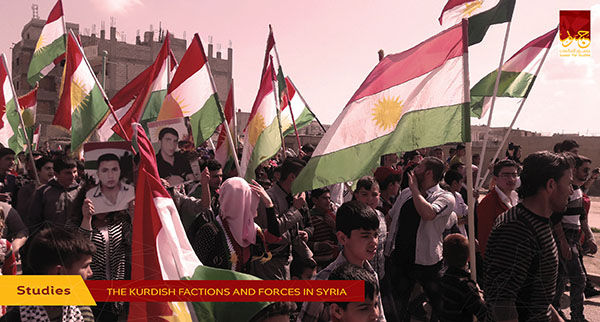 The Kurdish Factions and Forces in Syria

The Kurdish parties have several phases since its inception which affected its external form in terms of number and people who ruled it, and in terms of political demands and programs, and its vision to resolve the Kurdish issue in Syria.
The Kurdish parties began gathering in the beginning of the Syrian revolution after years of discord and differences, but the establishment of self-ruled by solo party was another reason for disputes, and the participation with other Syrian parties was a challenge for these parties which were delayed in joining the alliances outside the Kurdish group as a result of fear from the regime and democratic union party, and their relation with other Kurdistan parties.
To know the Kurdish forces and factions in Syria now is the priority of the politicians and researchers in Syrian affairs because of the ambiguity in the demands of these parties, especially at the beginning of the revolution , what they want in the Syria’s future , the relations of these parties with the regional countries and foreign parties particularly the Kurdistan parties, and how these countries and parties affect the policies and orientations of the Syrian Kurdish parties , and the relations of these parties with the Syrian oppositions and with the Syrian regime.
This study seeks to provide a historical background about the emergence of the Kurdish political movement in Syria , and because the movement did not remain as it was when founded , but the number of components ,demands and political programs have changed , so this study is trying to clarify the current forces , factions and gatherings and their current political demands and programs , and comparing them with their previous demands before 2011 to help readers to know this changes during this period.
We tried to provide additional explanations or referrals in the footnotes for the readers who interested to expand in references.
We would like to note that we ignored a lot of historical information, particularly what relating to the internal and personal disputes or defections within this movement because we did not think that it will be useful for the reader, and this disputes led to division within these parties, and we just mentioned the important information which is necessary to understand the parties that are still exist in the Kurdish political movement in Syria to this day.
This study was divided into six sections covering the important aspects of the history and present of the Kurdish parties and forces. the first section reviews the pre-establishment phase, the second section discusses the establishment, the third section is about the defections and birth of new parties, the fourth section is trying to clarify the current situation of the Kurdish parties , the fifth section is about the political programs and vision of the Kurdish parties , and the sixth is about the relation between the Kurdish forces and the Syrian opposition.