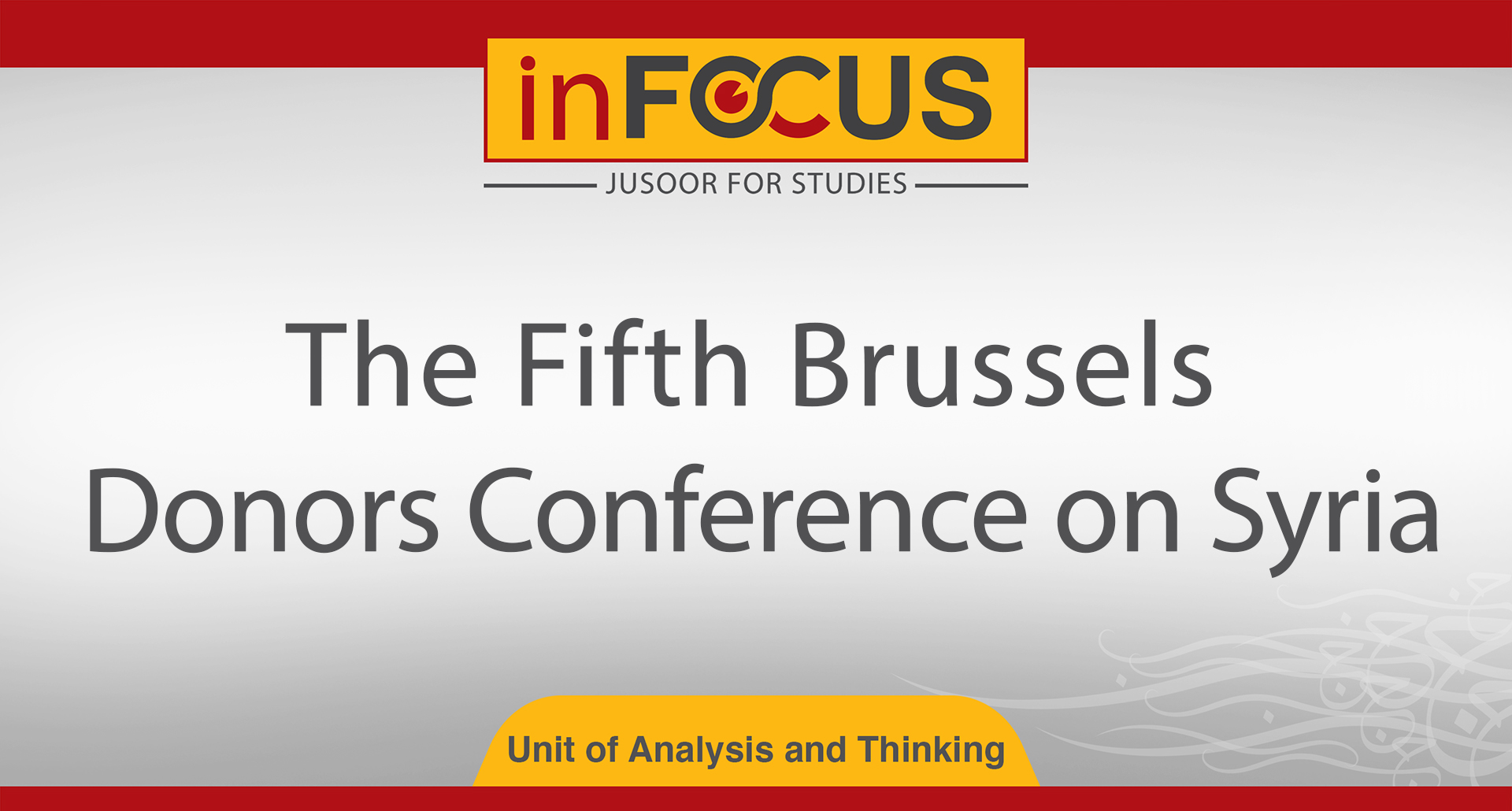 109
In focus | The Fifth Brussels Donors Conference on Syria
The Belgian capital, Brussels, hosted a donors ’conference to help Syrians inside and outside the country, including their host communities. 80 delegations from fifty countries around the world participated in the conference, in addition to humanitarian and human rights organizations and international financial institutions.
The conference is the most prominent humanitarian event for Syrians, as it is held annually to meet growing needs, and in which donors gather to renew and strengthen the international community’s political, financial and humanitarian commitments.
Some necessary notes about the conference could be established as follows:
• According to the United Nations and the European Union, the conference sought to raise an amount of 10 billion US dollars, less than half of it (4.2 billion) for the regions inside Syria, including the regime-controlled areas, and the rest (5.8 billion) to support Syrians and refugee-hosting communities outside Syria, especially in Lebanon, Turkey, Jordan and others.
• An amount of $ 4.4 billion has been collected for the year 2021, and an amount of $ 2 billion for the year 2022 and beyond, making the total amount approximately $ 6.4 billion, and international financial institutions have announced the possibility of providing large loans to support projects related to Syrian refugees. It is not necessary for the countries wanting, such as Lebanon or Jordan, for example, to obtain these loans, as the matter is conditional on the quality of the projects and the fulfillment of commitments to return them. It is noticeable that the number allocated for 2021 is far beyond what was hoped for by the United Nations, as the needs were set at 10 billion dollars, meaning that it did not reach half.
• The amount allocated to the Syrians inside Syria will be distributed to various humanitarian aid in Syria and in all areas of control, including the areas of the regime, the opposition and the Syrian Democratic Forces, and it is expected that the largest share will go to the areas of the Syrian regime, which is expected to reach 1.2 billion allocated mainly in the form of aid through the United Nations, the International Committee of the Red Cross and other organizations permitted to operate in the regime-held areas. It is also expected that the share of the population in the areas controlled by the Syrian Democratic Forces will reach about $ 350 million, and for those who live in the Syrian opposition-held areas it is about $ 650 million. They are annual sums that are distributed among various projects, some of which are medical, some are nutritional, others related to water, education, raising awareness and others, including stabilization support projects, whose percentage is very small compared to other sectors.
• The European Union is the main donor of humanitarian work to the Syrians, as Germany alone has announced more than two billion US dollars, and the United States is the most prominent donor with a total amount of 600 million US dollars. It seems that the granted number has been affected by the crises of the various countries that have been suffering from COVID-19/ Coronavirus epidemic for more than a year, as the amount in 2019 reached more than $ 6.2 billion.
Unit of Analysis and Thinking - Jusoor for Studies
To visit the English Telegram channel: Click here