That’s Why, How Jordan Attempts to Normalize Ties with the Syrian Regime 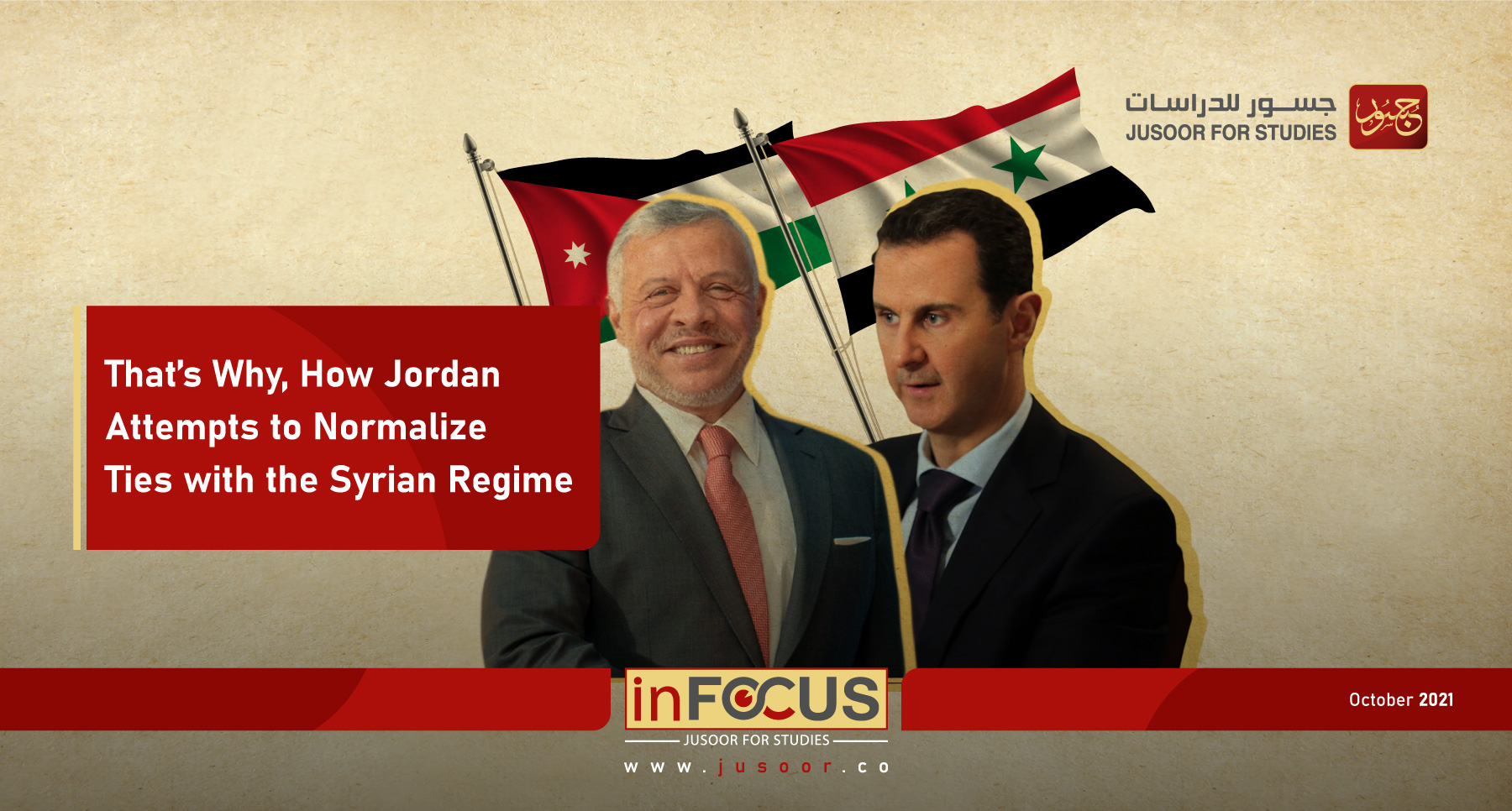 That’s Why, How Jordan Attempts to Normalize Ties with the Syrian Regime

In Focus | That’s Why, How Jordan Attempts to Normalize Ties with the Syrian Regime

The phone call between King Abdullah II of Jordan and the President of the Syrian regime Bashar al-Assad was the culmination of several steps that marked noticeable shifts in Jordan's position on the Syrian issue. Such moves, however, came as a result of changes in Arab mood and international attitudes toward the Syrian regime that began after the Russian intervention in Syria at the end of September 2015.
Earlier, Russia had coordinated its military intervention in Syria with many countries, topped by Jordan. The Russian intervention was preceded by the Jordanian King’s visit to Moscow in August 2015, one month before the beginning of the Russian military operations in Syria. It could, consequently, be said: Jordan has been part of the Russian strategy since that time.

Furthermore, after the Russian intervention got started, Jordan was assigned to evaluate and classify the opposition factions, in conjunction with the preparations for the Riyadh conference to choose the negotiating committee. Jordan, in coordination with Russia, also assumed the task of putting pressure on the southern factions in Daraa to cease the attacks against the regime once and for all, and also to allow Russia to monopolize the liberated areas, region by region.

In September 2016, Jordan warned the opposition factions against any action to support Daraya, which was being subjected to the most violent military campaign led by the Russian forces, then prevented these factions in Daraa from supporting Eastern Ghouta in spring 2018.

Meanwhile, Jordan, under the supervision of the United States, left the region of southern Syria alone, which was struggling from the Russian invasion attempts to seize control of Daraa cities and towns in July 2018, and subsequently the southern region of the country entered the phase of the "Russian-mediated reconciliation settlements and agreements".

Later, Jordan has started to play a new key role in line with the new military campaign that was launched against Daraa in the second half of 2021, as the Jordanian position evolved with the King of Jordan’s visit to Washington in mid-July 2021 to participate in the negotiations as a mediator between Russia and the United States to ease the economic siege on the Syrian regime, which Jordan was greatly affected by.

As a result of the Jordanian mediation, Caesar’s Law has already been suspended, trade exchange with Syria allowed, and the extension of the Arab gas pipeline through Syria to Lebanon, in conjunction with Russia’s neutralization of its air force from interfering in the recent Daraa confrontations.

Not only that, Jordan has also mediated to conclude an agreement that leads to stabilize the security situation in southern Syria, avoiding resorting to military operations or displacing civilians.

Moreover, after the announcement of the Arab Gas Pipeline Project, the Minister of Defense in the Syrian regime’s government visited Amman in mid-September 2021 to discuss security and military coordination measures and to protect the Jordanian borders and protect the gas pipeline that had been sabotaged, and that was about three months after the Minister of Electricity and Minister of Oil in the Syrian regime's government paid a visit to the Jordanian government, followed by the first phone call since 2011, that was announced in early October 2021, which in reality represented the Jordanian clear upgraded policy in normalizing relations with the Syrian regime after a complete political interruption that lasted for more than ten years.

The second track appears in coordinating with Russia in exchange for more cooperation in putting pressure on Iran. Consequently, the limited Arab opening up to the regime will be the motivation that encourages Moscow and Damascus to stop Iranian penetration; In other words, the Jordanian new push is part of a US strategy with a regional consensus to make the regime behave better and deal with the Iranian presence in Syria.

Overall, the recent Jordan-led trend comes within the framework of Amman's attempt to play regional roles in the region, including Syria and Lebanon. It also represents an attempt, generally speaking, to work in parallel with the American and regional orientation, but it is not necessarily part of a detailed agreement with Washington and other concerned countries, as Jordan strives to get further margins, and is works to test its own approach in an attempt to reach a solution.

Ultimately, if Jordan's approach works, it will have been able to achieve an influential political fulfillment regionally and internationally. But, however, if such an approach does not, then it will have a dramatic high political cost.