That's why Al-Julani was interviewed by Western journalists 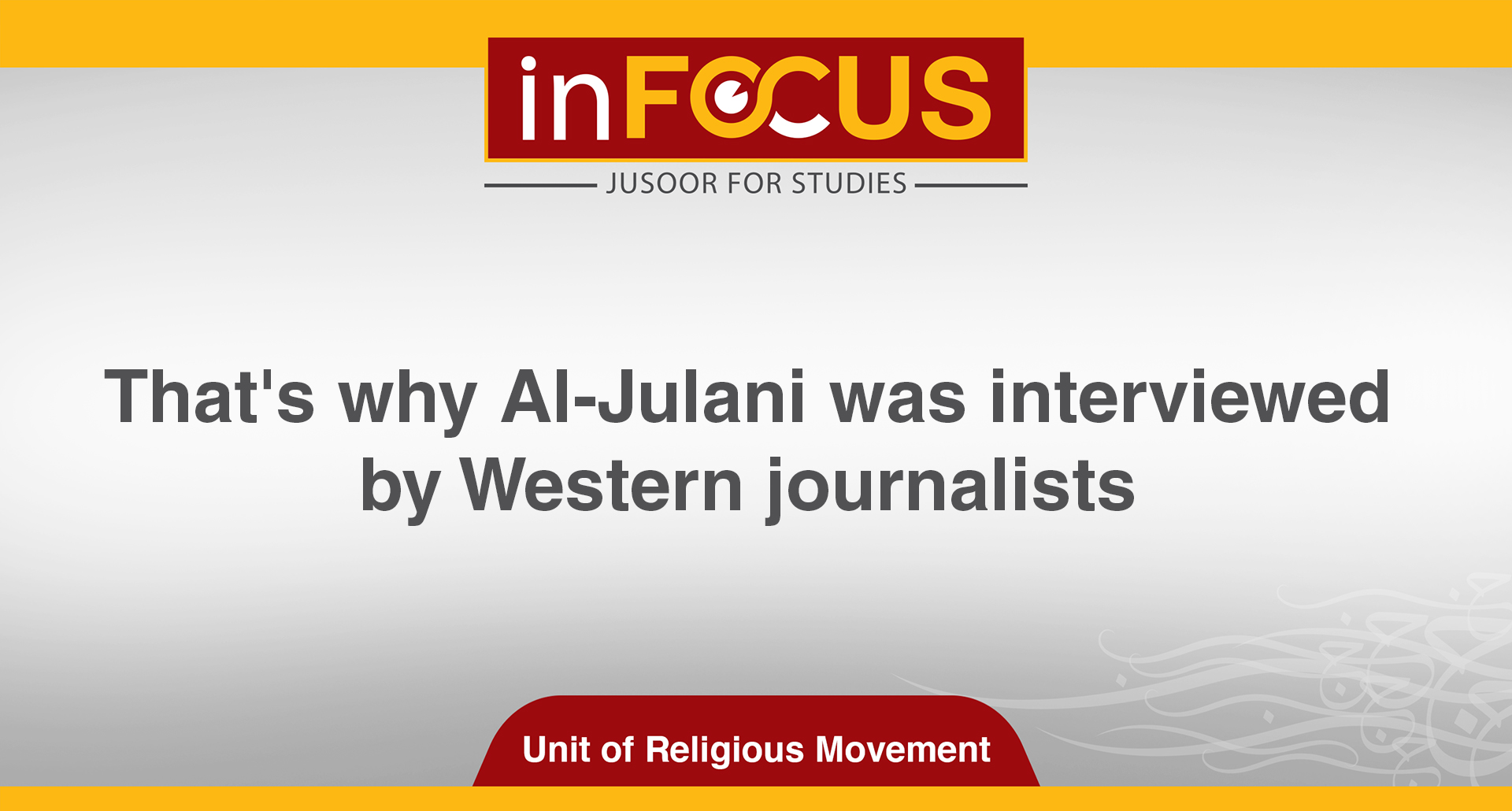 That's why Al-Julani was interviewed by Western journalists

In Focus |That's why Al-Julani was interviewed by Western journalists

On January 31, at the Bab al-Hawa border crossing, a media interview was held, which brought together the leader of Hayat Tahrir al-Sham, Abu Muhammad al-Jawlani (al-Julani,) with a group of Western journalists in the city of Idlib. One of the participating journalists, an American journalist, Martin Smith tweeted a picture on Feb. 2 with al-Julani.

This comes within the framework of HTS' efforts it has been pushing hard for having opportunities to improve its image abroad, in the hope that this will contribute to removing the group from the lists of terrorism.

In fact, the attempts of Tahrir Al-Sham for polishing itself began in the summer of 2017, with a campaign of contacts with the West. At that time, the political official for Tahrir al-Sham, Zeid Attar, had a meeting with a former British diplomat; “Jonathan Powell” who manages many back channels for negotiating with designated terrorist groups either internationally or nationally.

Abd al-Rahim Atoun, the jurist in charge of the Sharia council with Hayat Tahrir al-Sham, had stated in September 2020 to the French-Swiss newspaper "Le Temps" that Tahrir al-Sham did not pose a threat to the West, and that the area it controlled was in need of international aid.

Al-Julani also held a press interview in February 2020 with the International Crisis Group, in which he confirmed that pledging allegiance by Tahrir al-Sham to Al-Qaeda was an urgent alternative, and that "I conditioned my pledge on the notion that we would not use Syria as a launching pad for external operations. Nor would we allow others to use it for such a purpose."

Al-Julani's recent meeting came days before the publication of a report by the "International Crisis Group," which was headed by Robert Malle, before he resigned recently after appointing him as a special envoy to Iran, calling for the Biden administration to review the "designating of Hay'at Tahrir al-Sham", because such a matter has negative effects on the Western possibilities to provide basic services in Idlib.
In practice, HTS has been making efforts to put the foreign individuals away, those are considered according to the jihadist terms as the "transnational religious-political ideologists" where a part of Tahrir Al-Sham has working hard to redefine the group as a national faction with an Islamic ideology and does not pose any threat to international peace and security.

However, each of the United States and the international community may not trust such steps, as their own concerns related to HTS' ties cannot disappear as proved in the Security Council report issued on February 5, 2021, which described these moves as a matter of containment.

Reconsidering the designation of HTS as a terrorist group by U.S.  could not be related to simply achieving cosmetic changes in behavior and discourse, but rather requires strong justifications and real arguments, that is, making fundamental changes in the structure, organization and discourse.

Accordingly, it is likely that Tahrir al-Sham will continue its efforts to outreach to giving top access to highly-regarded Western influential and decision-making circles in order to improve its image, in addition to reshaping itself in a way that hinders designating the group again as a terrorist organization , and this explains its keenness to make the Military Council project in Idlib succeed and seek to integrate into it after controlling over its decision.

Broadly speaking, regardless of the ability and desire to remove Tahrir al-Sham from the blacklists, the United States may often continue its policy of not targeting HTS members and its leaders, and indirectly not objecting to cooperating with it through organizations or allies in order to deliver humanitarian aid to the displaced in northwestern Syria on one hand, and pressure Russia and Iran in Syria on the other.