Syrian pound hits new low, so why and what comes next! 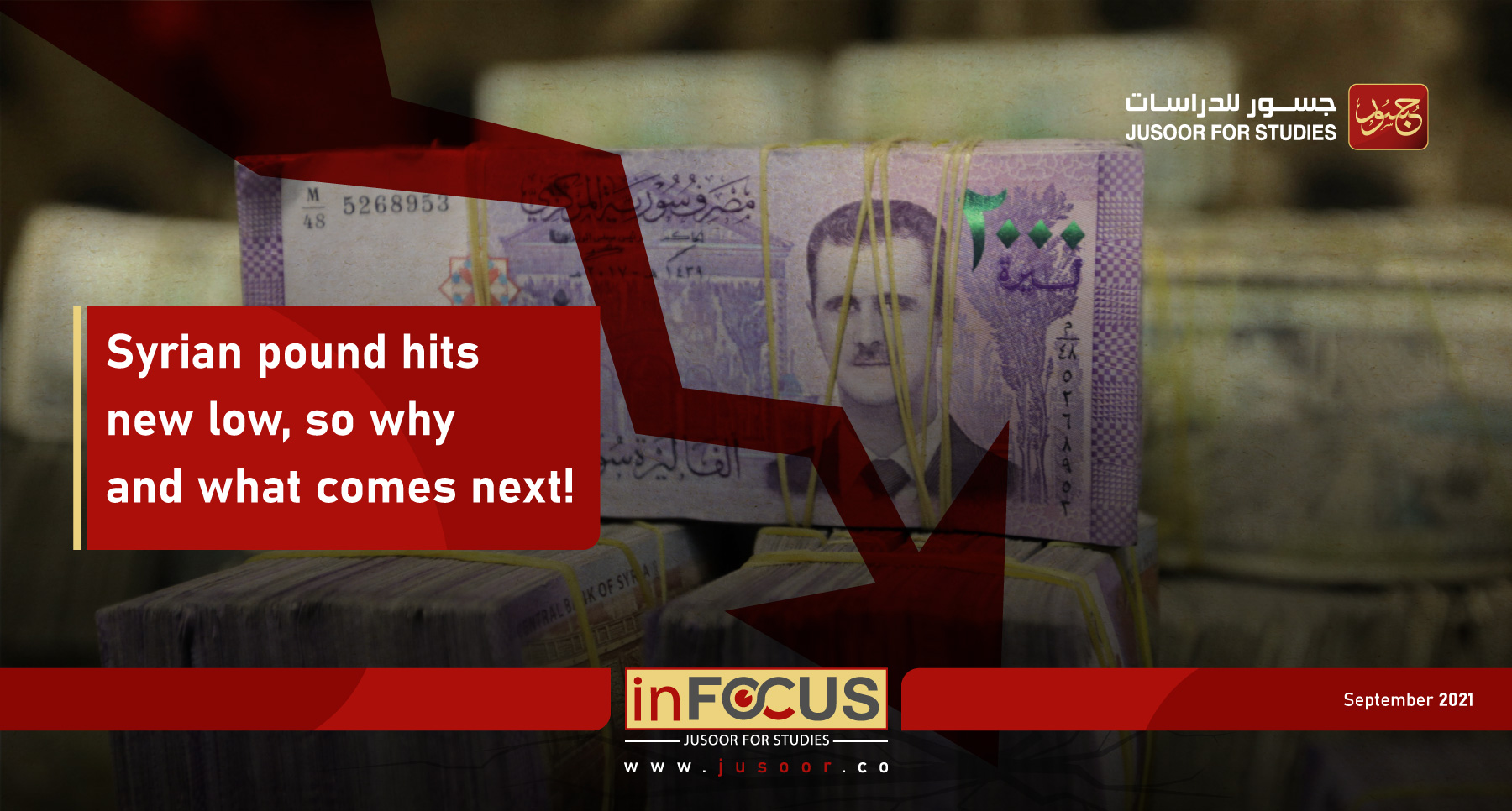 Syrian pound hits new low, so why and what comes next!

In Focus | Syrian pound hits new low, so why and what comes next!

Since mid-April, the exchange rate of the Syrian pound has been stabile significantly against foreign currencies, as it cost 3200 to buy one US dollar on the street, and this has remained stable for more than four months, which helped maintain the stability of basic commodity prices needed by Syrians living in the Syrian regime-held areas.

Also, since early September, the value of the Syrian pound has begun to fall, as the price of one dollar has reached 3,500 Syrian pounds, a decrease of nearly 10% of its value within days.

Accordingly, we could refer to some reasons led to such a decline as follows:

1 -Increasing money supply
The regime was able to maintain a stable exchange rate, by controlling the money supply by obliging traders to deal in accordance with bank transactions, confiscating assets and cash Syrian pound balances, forcing major traders to deposit huge sums in banks, and other measures to dry up cash flows. However, such measures can never continue indefinitely, it is, instead, temporal and has significant negative effects that lead to a decline in economic activity and stagnation hit markets.

Although the regime is still working to dry up liquidity, on the other hand, it has raised public sector (civilian and military) salaries in the beginning of August by 50%, which led to an increase in the money supply in the markets and a depreciation of the lira.

2- Frequent hike in price of fuel and basic commodities

At the end of the first week of July 2021, the Syrian regime has raised the price of gasoline 95 octane for the fourth time during 2021, to be 3000 pound per liter.  This decision, however, came days after multiplying the price of sugar and rice. In fact, this impacts on prices of every single material. Actually, the materials from which the subsidy is removed are basic commodities that have effects on transportation, production, and services provided to families, which raises prices, that is, increases the rate of inflation.

3- Deepening of the economic crisis in Lebanon

Beirut has long been the economical lungs for its neighbor, Syria in terms of securing most of their needs, and with the start of the Lebanese crisis, the smuggling of goods - especially fuels - to Syria increased, and Syrian merchants were able to deliver some goods to the Lebanese markets, but this did not last long, as the Lebanese market reached a state similar to drought, which cut back on these benefits.

All in all, the above reasons related to the recent decline in the price of the Syrian pound cannot be separated in any way from the deteriorating economic situation in Syria. Instead of seeking a practical solution, the regime strives to have few resources of foreign exchange to finance the war rather than defending the Syrian pound and controlling prices. Consequently, this makes us expect a further decline in the value of the Syrian pound until the end of 2021, which means an increase in the prices of most goods and services. Moreover, the regime keeps dealing with the problem on the basis of blaming exchange offices, Syrian citizens and international sanctions, those have been imposed on security and political figures within the regime itself.

Let us say it very clearly: this will never lead to any practical solutions to the problem.