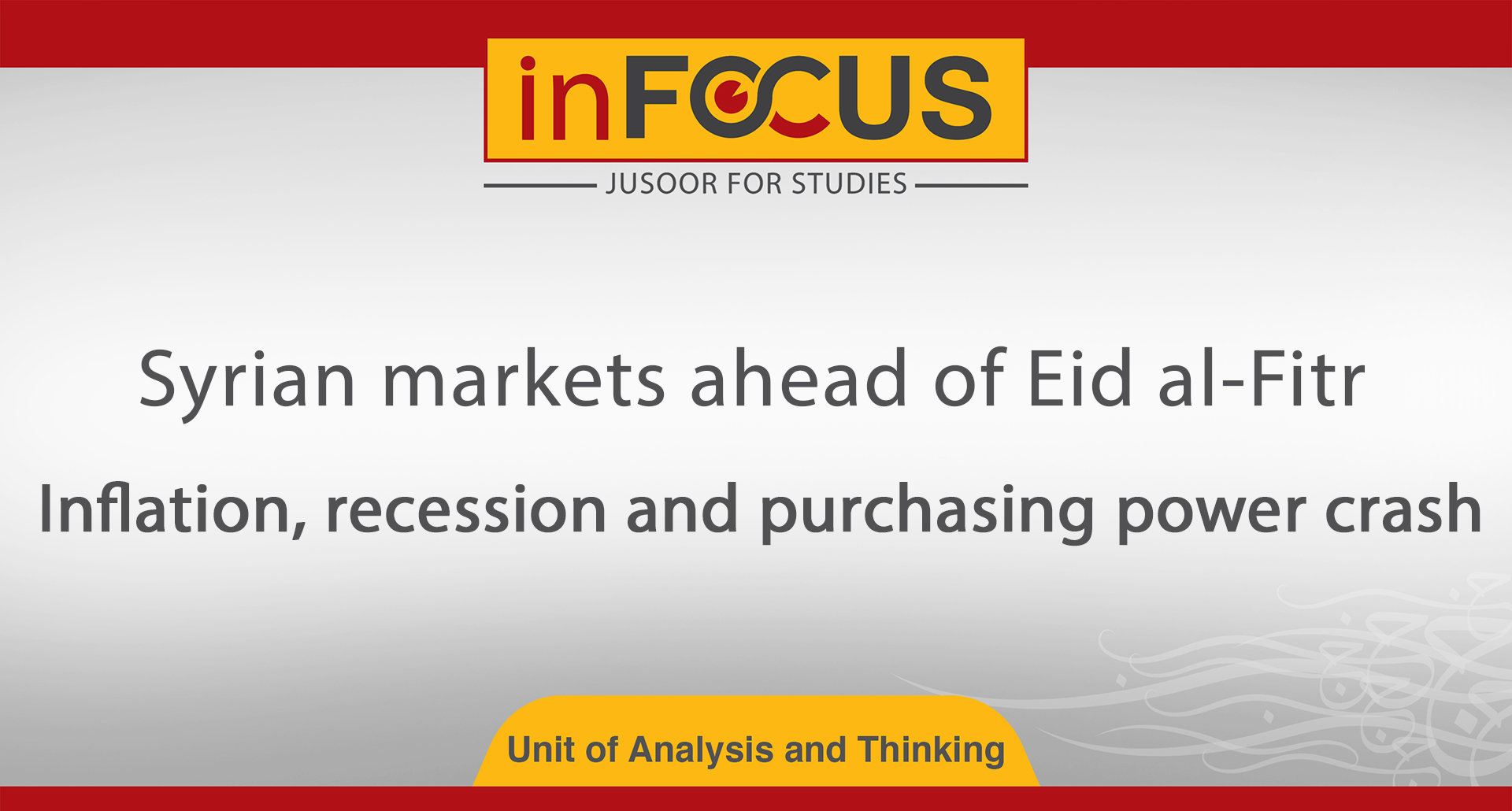 Annually, before the holidays of Eid al-Fitr, the commercial traffic significantly increases which reach out plenty of Syrian markets, extending to various types of goods and services, starting with clothes, foodstuffs and roses, and ending with lots of services such as haircuts, wedding reservations, and others.

It is noted that this year brought unprecedented features, not been monitored before in the Syrian market, the most prominent of which are:

1 - The clothing sector in particular, which constitutes the largest selling share in Eid goods and services, has seen a remarked drop in the percentage of sales due to the unprecedented price hikes, as the price of boys' pants, for instance, reached about 25,000 Syrian pounds, and a shirt is about 15,000, which is equivalent to most Syrian employee salary as a whole.

2 - Southern Syria's markets significantly stagnated more than other regions, as the markets of Daraa al-Balad district and most major cities and villages witnessed an unprecedented recession, due to the undeclared siege that is being imposed on the governorate, as merchants wishing to bring goods have being forced to pay large royalties to the regime's army and Hezbollah security checkpoints. In addition, fuel tends to be less frequently available in the governorate compared to other ones, let aside the weakness of other services that that characterizes the general condition of Daraa and leads to a decline in production.

According to data come from some money transfer and exchange companies, that money transfers coming from expatriates this year to their own families and relatives in the south were less than other places compared to previous years, as most Daraa families depend on the remittances of their sons living abroad. This reason may be also due to the nature of the countries' hard economic conditions in which of the province's expatriates live, which comes as a result of the outbreak of the COVID-19 (Coronavirus) pandemic around the world.

3 - The price rise in the northern Syrian markets seemed noticeable, especially in the second half of Ramadan, and it is believed that the curfew restrictions in Turkey have a direct impact on the markets’ activities and goods access to the northern markets.

It is noticeable that the commercial traffic was better in Azaz, Jarablus, Sarmada, Dana and Qamishli compared to the markets of Idlib, Al-Bab and Raqqa. It is expected that the reason is due to the high-income level of residents in the border areas more than their counterparts in the other regions.

4- The traditional Damascus markets experienced active movement compared to Aleppo, Latakia and the rest of the governorates. In Homs, the emerging markets witnessed greater movement than the old ones.

5- The demand for second-hand clothes, was evident in the markets of northern Syria, especially Ain al-Arab, al-Dana and Idlib city, due to the low prices compared to the new ones.

6- Despite the issuance of a one-time financial grant for employees in the Syrian regime-held areas, amounting to 50 thousand SP for workers and 40 thousand SP for retirees, several days before Eid al-Fitr, it did not clearly affect the commercial movement, as on the one hand it was not delivered to the beneficiaries until May 10, on the other hand its value is quite low compared to high inflation, high household debt and a large gap between the basic needs and the resources of the family.