Study of the document of Alawite initiative 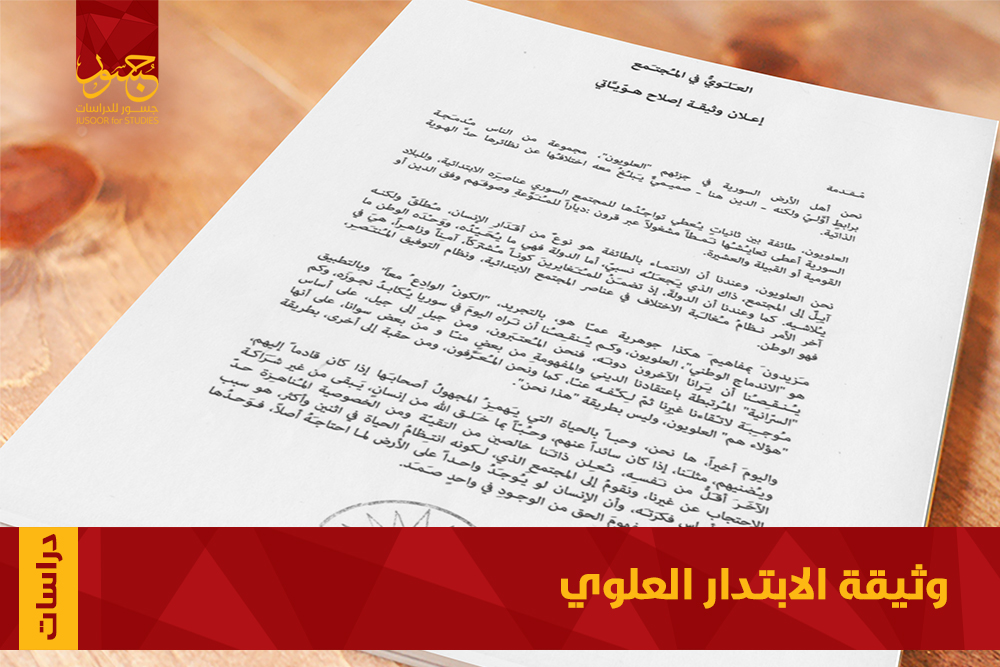 Study of the document of Alawite initiative

The British channel, BBC displayed excerpts of (document of alawite initiative) on April 3,2016, which written by unidentified Alawite intellectuals to determine their cultural identity, features of Alawite's self, and the intellectual and political domain in the historic sequence they believe.
They are seeking for the first time to determine the alawite identity and to clarify their explicit attitude from the major issues about self, identity, Syrian homeland and perception of God.
The document mixed between religion (Alawite) and political (intellectuality),
and if some questioned the fact of Document's belonging to a sectarian intellectually, it has been confirmed that it was written by academic politicians which know the truth and history of alawite religion by extrapolation and tracking, and the challenge remains in its credibility due to the acceptability of this document and its representation in Alawites in Syria.
The document is important due to the issuance by individuals represented some of the sectarian internally who they had the courage to talk about the mysterious sectarian situation of alawite which is similar to most of Levantine minorities with the historical religious dimension.
The document was explicit  when talked about self and identity and this maybe reflects an urgent need for the Sect  to present an accurate definition for itself after the confusion over the past decades , beginning from the advisory opinion (fatwa) of Mousa Al-Sadr , the leader of Lebanese Shiite to consider Alawites as a part from Shiite Muslims, and this advisory opinion is considered a political fatwah and does not based on the religious content and issued especially for Hafez Al-Assad , and ending by the Shiite Iranian semi-full guardianship on the decisions of Alawites after delivering Syria to the Iranian controlling, security and politically in exchange for their support since the outbreak of the Syrian revolution.
The document is important also in terms of its issuance after 5 years of Syrian revolution, which showed Alawites as a defendant party by standing with the regime clearly, involving in blood, and supporting the regime as an eternal support, and they have the larger losses of war with regime and supporting groups against the rebel people.
Issuance of the document in this time maybe due to revisions interact within the sect, and try to find a map for future of Syria and sect which most of its young were killed in the battle without any clear goals except some provocative mottos invented by system to keep its supporters, what led to involve the sect in Syrian blood with regime.
So, the issuance of this document expresses some wise voices within the sect which rejected what happened in Syria but they are not able to declare their attitude due to the fear of regime, and the response of alawite sect that rejected the Syrian revolution.
This document appeared in critical political time for Alawites which synchronize with the clear decisions of security council about formation of the transitional provision and restructure of military, security and other Syrian institutions within the Russian pressure on Syrian regime to make political change, or the Russian attempt to impose a new constitution for Syria.
So, writers of the document realized that the era of what can be called (making Syria an alawite state which was continuing for a half of century ago) will disappear and the political alawite and attempts to full controlling on Syria are likely to decline, and thus Alawites must make a real and radical change to ensure to stay as one of the Syrian components, especially with the loss of young in the sect.