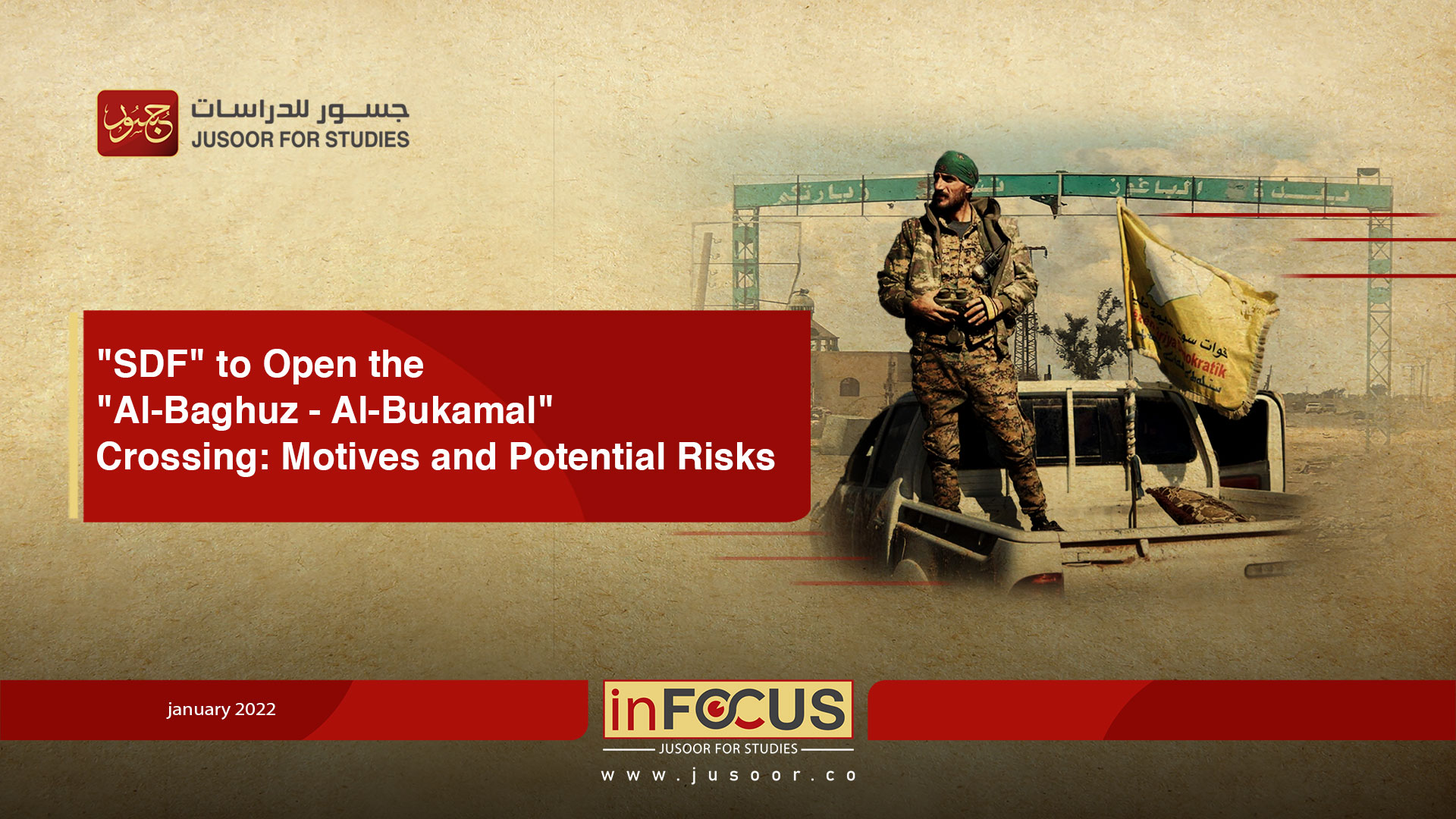 On January 16, 2022, the Syrian Democratic Forces, in coordination with the Syrian regime, opened a new unofficial crossing in Deir ez-Zor, between the town of "Al-Baghouz" and the city of "Al-Bukamal”, linking the areas controlled by the two sides via a floating bridge on the Euphrates River. The two sides did not announce the opening of the crossing to be used for commercial exchange.  It is administered by the "SDF" from its areas of control through two customs points.  On the other side, it is administered by the Syrian regime forces from their areas of control through two customs points that are affiliated to the Ninth Division, which is under Iran’s domination.

More than ten smuggling points are spread along the Euphrates River separating the two sides' control areas in Deir ez-Zor. These points are run by leaders of the "SDF" and the Kurdistan Workers' Party, along with security and military leaders from the regime forces and militias affiliated with Iran on the other side.  These points are used to smuggle materials, mainly fuel and flour, from SDF-controlled areas to regime-controlled areas, to benefit from large price differences. These smuggling points constitute safe passages for the security cells members of the Syrian regime and militias affiliated with Iran, which are mainly active in the countryside of Deir ez-Zor and Hasaka.

Although SDF- supported by the international coalition- carriers out continuous operations targeting these points and their workers, it has not succeeded so far in stopping their work or dismantling the networks running it.

The factors and reasons that prompted the "SDF" to move forward with the opening of "Al-Baghuz - Al-Bukamal" can actually be summarized as follows:

- The SDF failure to stop the smuggling operations taking place between its areas of control and those of the regime’s through smuggling points, which calls for the need to curb smuggling by legalising, controlling, and limiting them to semi-official crossings, that are managed in direct coordination with the regime forces.

- The SDF provided an alternative to the "Simalka" and "Al-Walid" border crossings with the Kurdistan region of Iraq, which were closed more than a month ago, as they had originally been major supplier for a large percentage of food, medical and building needs; especially when the new crossing is only about 8 km from the "Al-Bukamal" border crossing between Syria and Iraq.

Despite all that, SDF is expected to face a number of challenges and risks compared to the magnitude of potential gains, as shown below:

* The SDF and the international coalition may face more security challenges. It is possible for the security cells of the regime and militias affiliated with Iran to use the crossing as an additional access point towards the SDF-controlled areas, knowing that the opening of the new crossing does not necessarily mean the cessation of other smuggling operations taking place through the smuggling points spread along the Euphrates River.

* Availing a new financial resource for the Syrian regime forces and Iranian militias, that might help them support and enhance their military and security activities in the Euphrates basin areas, including the SDF areas.

* The crossing does not necessarily contribute to reducing the poor economic and living conditions within the SDF-controlled areas, which were often caused by fuel and flour shortage, if these commodities were not allowed to pass through the crossing.