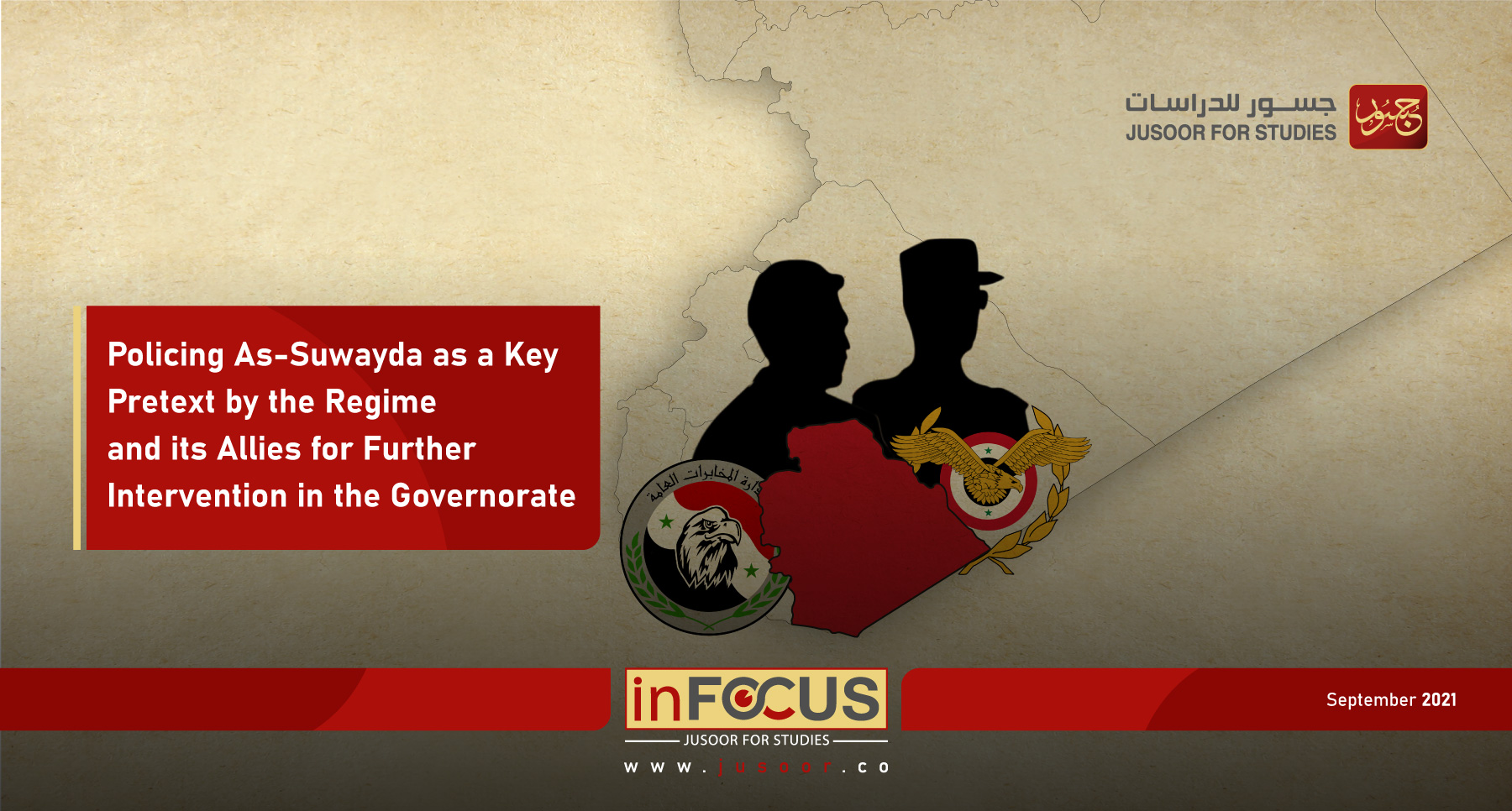 Tensions have spiralled in As-Suwayda Governorate, southern Syria - against a backdrop of clashes were erupted between local factions - peaked on the eleventh and twelfth of the current September, which came on the background to confrontations between the newly formed "Anti-Terrorism Force" and local armed groups receiving support from the military intelligence of the Syrian regime.

The recent clashes that took place in the town of “Al-Qurayya” and the outskirts of the city of As-Suwayda came after the newly formed “Anti-Terrorism Force” faction detained a cell affiliated with a group led by Raji Falhout, who has ties to the regime's “Military Security Service”. However, it is suspected that the regime-affiliated group to be behind assassinations and bombings being carried out in As-Suwayda Governorate.

In fact, armed attacks and kidnappings targeting the headquarters of local factions, dignitaries and political and human rights activists, or even civilian property have increasingly escalated since August.

Most likely, many of the violations and assassinations have been schemed and carried out by groups linked to the regime’s military intelligence, and it seems that they have been doing so to establish an unstable environment that might pave the way to further intervention of the regime's security services in the Governorate of As-Suwayda, after convincing community leaders and dignitaries over there that there are compelling reasons might drive the regime forces to intervene in order to enhance security control and end the "chaos of arms".

Not only the regime but also Russia pays remarkable attention to the As-Suwayda Governorate, as Major General Ali Melhem, head of the General Military Intelligence Division, who is close to Moscow, has been assigned to take over this case, in an attempt to reproduce the model of Daraa Governorate, when the security committee responsible for it was chaired by the Head of Political Security, Major General Hossam Louka.

After all, it seems that the regime will capitalize on the internal concerns spread inside As-Suwayda over the emergence of political or military forces that receive international support, that may be calling for Assad's departure and the implementation of UN resolutions on political transition. Actually, the reference here is to the "Syrian Brigade Party" and its armed wing the "Anti-Terrorism Force".

Such worries, however, emerged because each of clerics and grass-roots actors are afraid of dragging As-Suwayda into a conflict that will naturally lead to clashes between the local factions those have different -if not conflicting- affiliations and backgrounds. Some factions are supporting the regime, while others opposing it in addition to others those are just neutral and raising the slogan of defending the residents of As-Suwayda.

As a matter of fact, what reflects the state of popular apprehension is the launch of the "Syrian Brigade" party headed by the French-based journalist, Malik Abu al-Khair, and the subsequent emergence of the party’s armed wing "Anti-Terrorism" force.

Appeals made by Sheikh Al-Aql Yousef Al-Jarbou' to the security services in the regime to intervene and policing the region through the Russian “Sputnik” agency are also representing a source of great concern, especially if we know that there is a state of popular dissatisfaction with the behavior of the new forces, particularly the killing of a person of “Bedouins”, and hanging his body in the public square, which heightened fears of a civil war.

All of the above make the regime gain greater influence over As-Suwayda, given that what is happening supports its narrative of its role it plays in preventing the civil war between the Syrian sects, according to its own claims.

It is not unlikely that Russia has concerns about the efforts of some international parties to replicate the model of northeastern Syria (the Autonomous Administration) in As-Suwayda Governorate, and this is a key reason for increasing its interest in the region and working to expand the influence of the security services across the region. Russia may also fuel inter-communal conflicts, which in turn creates a pretext for military intervention and the deployment of army units at the request of locals.