Overview: The Real Impacts as the Interpol Lifts Restrictions Imposed on Syrian Regime 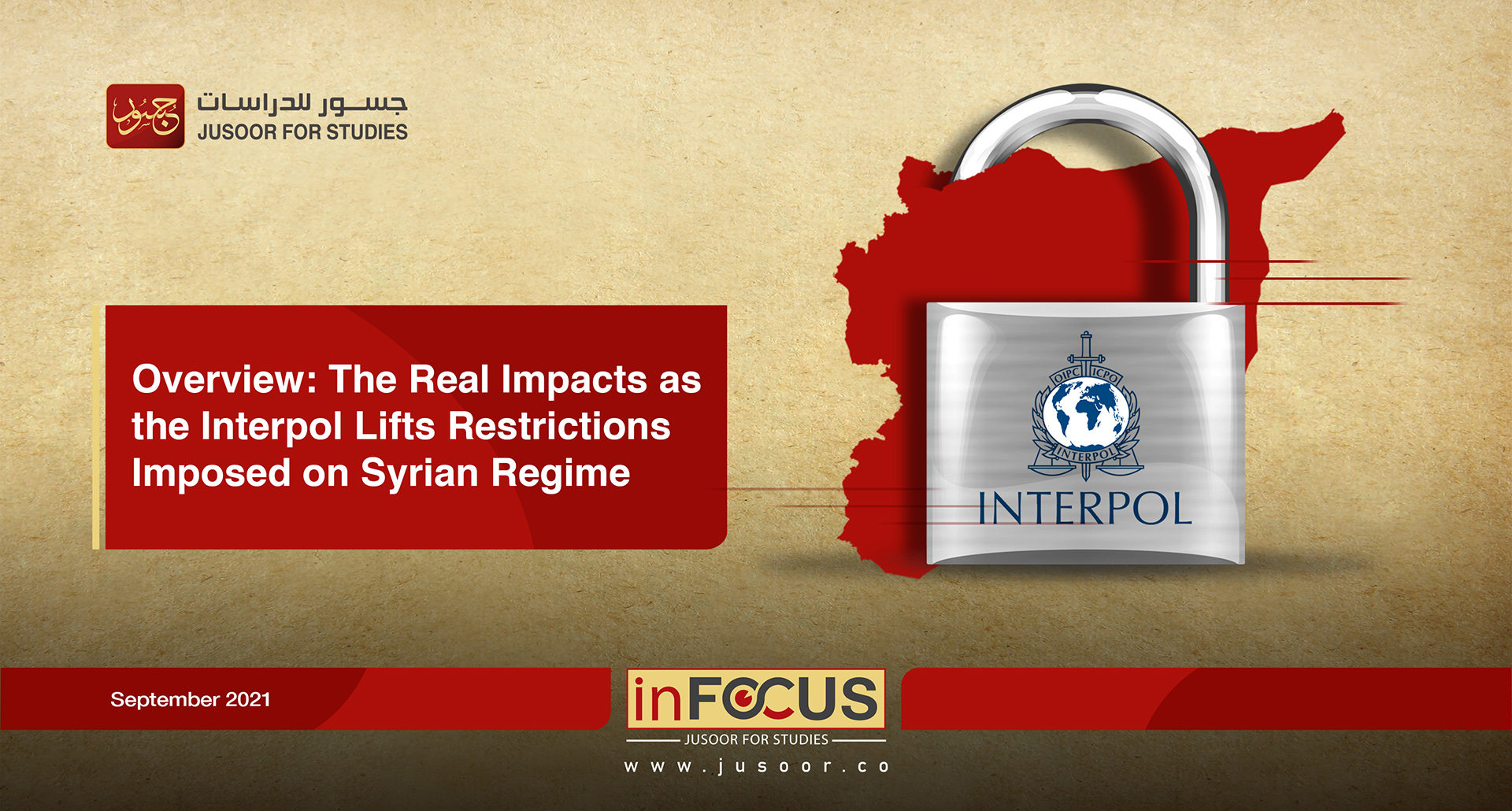 Overview: The Real Impacts as the Interpol Lifts Restrictions Imposed on Syrian Regime

155
In Focus | Overview: The Real Impacts as the Interpol Lifts Restrictions Imposed on Syrian Regime
Out of the blue, in early October 2021, the General Criminal Security Department of the Syrian regime announced the lifting of the restrictions that had been imposed on it by the International Police Organization (Interpol). Consequently, such a move means that Damascus can directly receive and send messages from and with other member states of Interpol national offices, knowing that these access rights had been suspended since 2012.
Previously, sending and receiving messages, after imposing the restrictions, stipulated that to transfer messages received from the regime to be subject to the audit of the General Secretariat of Interpol, and then the latter to forward them to the relevant executive authorities after verifying their compliance with its rules.
Based on the new procedure, the regime's criminal security department will be able to access the INTERPOL network database.
This very move raised concerns about the Syrian regime's willingness to take advantage of lifting the restrictions imposed on it by Interpol in order to pursue opponents abroad residing in various countries.
Most likely, the measure came after Russian diplomatic efforts, in coordination with some Arab states, which recently took additional steps in the course of normalization with the regime without the United States' objection.
The gains that the regime might have from this measure are predominantly related to politics and media. The pro regime, Iranian backed, Russian-affiliated media outlets have widely highlighted the political dimension of this development, stressing that it is an additional indication of “ending Damascus’ political isolation” and the international community’s acknowledgment of the regime. Overall, the latter claim represents the main objective of Moscow more than the issue of pursuing opponents.
In practice, the regime faces a variety of complications prevent it from benefiting from the recent decision taken by the Interpol in the process of clamping down on its opponents, and they can be mentioned as follows:
1- The International Criminal Police Organization (INTERPOL) deals with criminal cases only, not political ones.
2- The member states of INTERPOL are not obligated to provide Interpol with all the information they possess, and therefore the criminal security department of the regime will be able to access the information available only on the public database of the Interpol, not on the security services of the organization's member states. Furthermore, most countries provide only a small amount of information on INTERPOL's public system, relating to wanted persons residing in other countries.
3- INTERPOL member states are not obligated to take actions or measures regarding any communication or notice they might receive from other member states. Moreover, the maximum action that they may be exposed to in the event of rejection is reciprocity from the author of the notice that has not been responded to, given that the Interpol system is no more than an international agreement, with no penal support forcing members to implement, and subject only to the principle of reciprocity.
4- Individual national Interpol offices still have the power to decide with which other countries to share information and to respond to the communications received from the regime, this is up to each country, and it will take it according to the considerations it deems appropriate and in accordance with its political interests and human rights principles the country follows. In addition, this will depend on the countries those wish to cooperate in security and intelligence affairs with the regime, and those who facilitated extradition before the Interpol lifted the corrective measures those were imposed on Damascus, like Lebanon.
5- Arresting wanted persons who are likely to be listed by the regime on the Interpol Red Notice requires a copy of an official court order issued in accordance with clear due process, and many member states of Interpol have previously refused to implement such orders they received from the regime, which has a non-independent judiciary according to these states.
Overall, the Red Notice is a notification, and does not amount to an arrest warrant, and the most that the regime can do against its opponents through the Interpol is to obstruct their travel and movement; by claiming that they possess forged passports and circulating their passports' numbers, and that what it had done previously through bilateral security coordination with some countries that welcome this without the need for the international organization (INTERPOL).
All in all, it is not unlikely that the regime will fabricate criminal judicial orders against its opponents, send and circulate them through Interpol, but the response of member states to such requests depends on the position of each state, as long as the agreement is not binding, especially since the credibility of the security services and the Syrian judiciary is in doubt, and it is accused of committing violations and war crimes and not a neutral party.
Accordingly, the actual impact of the latest INTERPOL action is related to political and media considerations than legal and procedural.