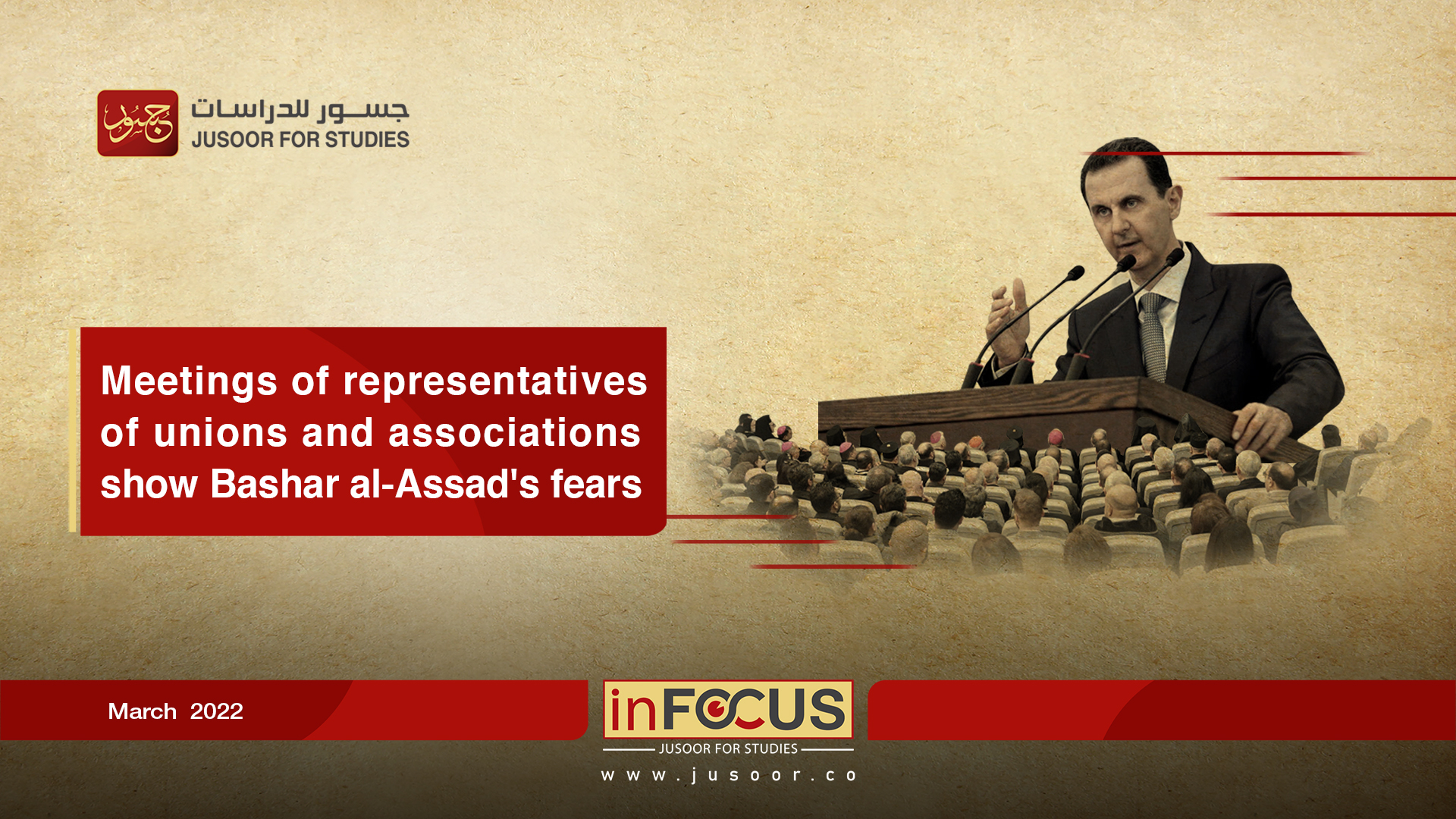 112
Meetings of representatives of unions and associations show Bashar al-Assad's fears
The head of the Syrian regime, Bashar al-Assad and his wife, Asma al-Akhras, held several meetings with representatives of trade unions, associations, and cultural and religious actors between March 8 and 21. During the meetings, they dealt with a number of issues such as charitable and relief activities and media and religious discourse.
Bashar al-Assad's meetings included representatives of male and female teachers from different governorates on March 17, and representatives of humanitarian, social and development associations and institutions participating in the International Ecclesiastical Conference on the 20th of the same month. Two weeks ago, Asma al-Akhras had visited a number of women producers.
It was clear that Bashar al-Assad was afraid of crises that might result from the poor and deteriorating living conditions in the regime-controlled areas. That is why he called representatives of Christian institutions and associations for a partnership called “work and production” and to provide them with aid and humanitarian assistance without discrimination.
It seems that Bashar al-Assad is counting on the relations of the Syrian churches in order to influence Western countries to reduce the size of the economic sanctions his regime is facing, claiming that the regime is still the protector of minorities and the Christian presence in the region.
It is expected that the living conditions in Syria will worsen in the coming period, which may raise al-Assad's fears of the return of popular protests that took place in regime-controlled areas during the past few years against poverty, hunger and unemployment.
Of course, young people and adolescents are the groups most willing to express resentment and discontent with the living and economic reality and to be affected by the media discourse circulating on social media. This explains Bashar al-Assad's efforts to reshape the national identity according to the authority's narrative through a number of steps:
• Reconsidering the educational curricula and the educational system as a whole; by adopting a subject to teach the Muslim Brotherhood's struggle with the power and build a historical memory that considers the events of 2011 as merely an extension of the events of the 1980s in the face of terrorism.
• To exercise control over social networking sites and prevent any activity that may incite or affect the population, especially the youth group; By making some amendments to the cybercrime law, including criminalizing undermining the state’s financial position.
• Redefining the concept of being loyal and make it limited to be loyal to the ruling authority, not to the nation. This could be through directing the clergy and influential people in society, including teachers, artists, and others, in order to create a public opinion that faces the challenges of the emergence of a new generation that is not loyal to the authority and lives within the regime-held areas.
In general, there is no reason to believe that the regime will abandon its approach to dealing with society. Rather, it seems insistent on continuing to manage the crisis, as it did in the eighties of the last century, when it chose repression and nationalized education in favor of power. It tried to impose a certain ideology on the groups of youth and children through slogans.
In light of the great failure that the regime has faced in addressing the economic and living crises since 2012, and the risks of their increasing with the possibility of a decline in the ability of its allies, particularly Russia, to provide it with assistance and support, Bashar al-Assad seems more afraid than ever of a new wave of protests in the regime’s areas of control that are not limited to the traditional areas of Daraa, As-Suwayda and Tartous, but extending to include other points.