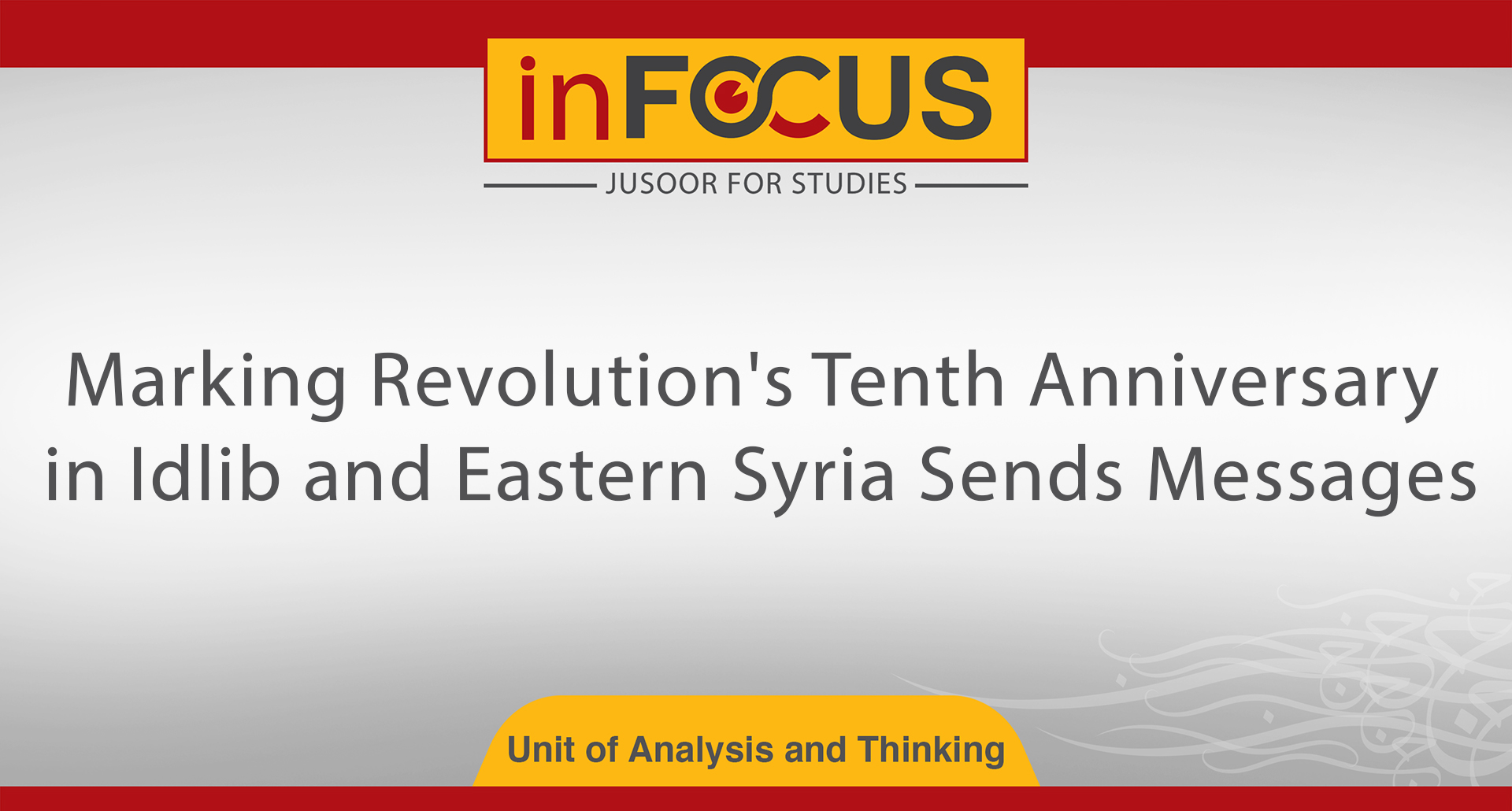 Syrians across the regions of Idlib and eastern Syria have commemorated the tenth anniversary of the revolution in a large and remarkable way. Each of Hayat Tahrir Al-Sham (HTS) and the Kurdish Democratic Union Party (PYD) have never ever called for, organized or permitted such demonstrations.

In Idlib, the Syrian Salvation Government, an administrative body affiliated with Hayat Tahrir al-Sham (HTS), called for a central demonstration in the city of Idlib. It was not only that, but also the government organized, protected, mobilized and made it more accessible as for the displaced living in the camps, as well as wrote slogans and flew the flag of the Syrian revolution. For the first time, neither the banner of Tahrir Al-Sham nor the Salvation Government's flag were raised, which is similar to the revolution's one but has a little bit difference replacing the stars in its center with an inscription of the Islamic creed, or shahada: "There is no god but Allah; Muhammad is the Messenger of Allah".

In the east of the Euphrates, the Future (Mustakbal) Syria Party, the Party for Modernity and Democracy for Syria and the Green Idlib Council called for demonstrations in Manbij, east of Aleppo, Hasaka, Kasrah, west of Deir Ezzor, the city of Tabqa, south of Raqqa as well as the city of Raqqa itself. The Democratic Union Party (PYD) was satisfied with issuing a commemorating and support statement for the Syrian revolution without participating in calling for or organizing demonstrations, and so was the position of the Syria Democratic Council, a political wing of the Syrian Democratic Forces, which marked the anniversary too.

It is imperative to examine the messages that Hayat Tahrir al-Sham and the Kurdish Democratic Union Party wished to convey in this unprecedented interaction with the anniversary of the Syrian revolution, especially since both parties used to ban using the revolution’s flag, symbols or slogans.

• Tahrir Al-Sham is trying to confirm its continuing efforts to abandon the discourse and ideas of the jihadist organizations, and to redefine itself as a local military organization with Islamic ideas, in the hope that this will contribute to removing its name from designated groups as terrorist organizations.

• The Kurdish Democratic Union Party is trying to hint at the possibility of abandoning the separatist agenda, and that it is about to redefine itself as a national Syrian party, in the hope that this will contribute to a  testing the confidence with Turkey, which it said it is ready to engage in dialogue with the Party.

• The Kurdish Democratic Union Party is trying to show a willingness to open up to the Syrian opposition. This is consistent with the announcement it issued on the readiness to establish a dialogue with the opposition in 2021. In addition, the Party is trying to put pressure on the Syrian regime; especially after the bilateral talks were stalled as a result of the latter's rejection of its conditions on the model of administration and the nature of the powers.

In fact, HTS took a period of time to accept such a shift in dealing with the slogans and symbols of the Syrian revolution, and consequently it makes sense that the Kurdish Democratic Union Party (PYD) might take gradual steps if this shift meets its own goals.
HTS's celebration of the anniversary of the Syrian revolution does not seem aimed at conveying messages of confidence to the Syrian opposition, given the shrinking space for differences over symbols, slogans and ideas, because it is still keen to preserve power in Idlib without sharing with others, insofar as they are messages directed to external actors.

Likewise, the Kurdish Democratic Union Party’s acceptance of celebrating the anniversary of the Syrian revolution in the areas of its control in the east of the country does not seem to be the result of self-convictions or its own intentions, but it comes in line with the  political status quo, and after the American pressure on the party to separate its announced narrative from that of the PKK, which is designated as a terrorist group in the United States and Turkey, and to prevent any actual affinity for the PYD with the Syrian regime.