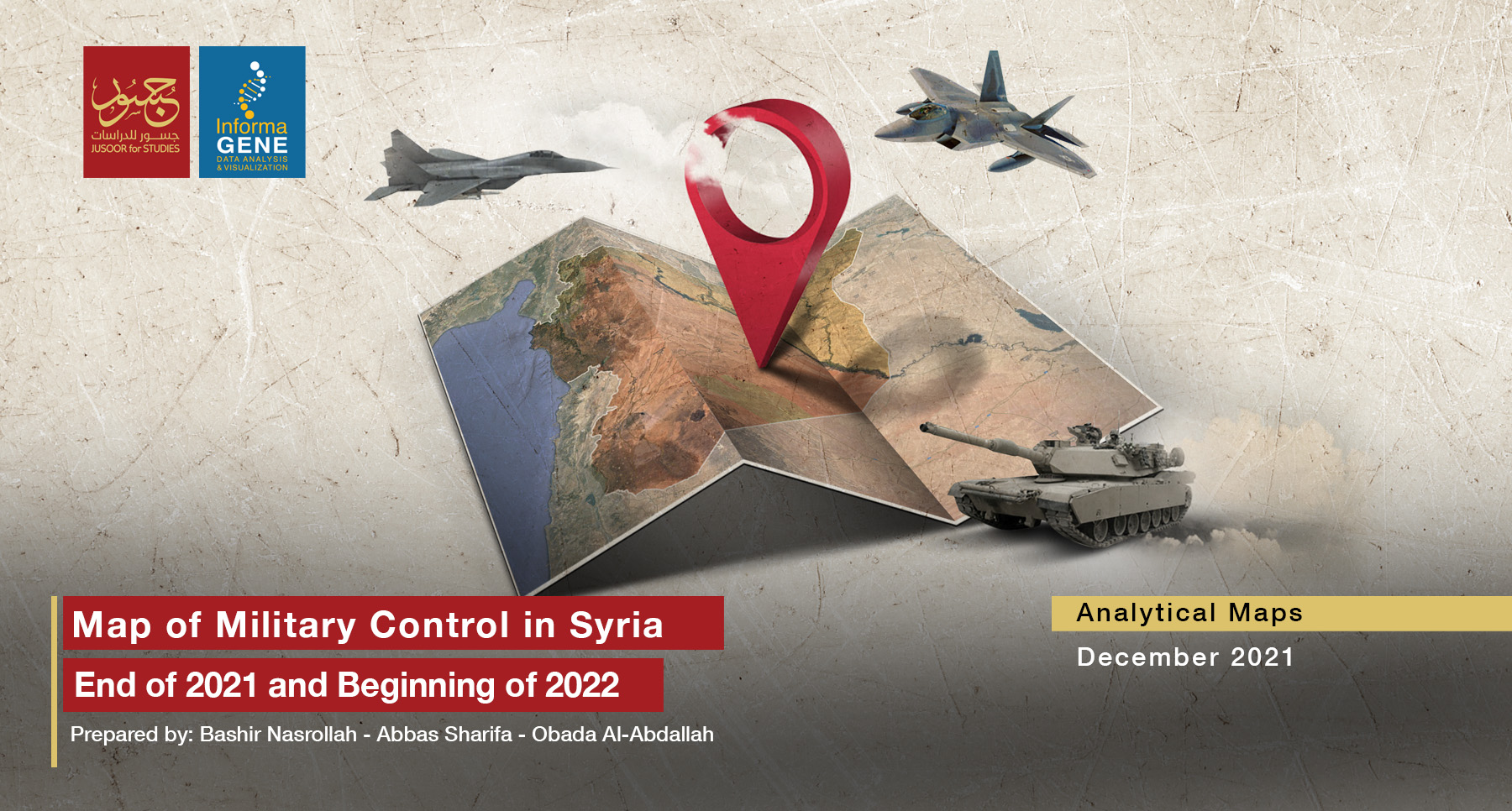 By the end of 2021, no changes appeared in the areas of military influence across Syria regarding the front lines between local conflicting forces on the ground. Also, the territories occupied by the parties to the conflict in Syria remained almost the same, according to was reported at the end of February 2020.
As such, the ceasefire agreement between Turkey and Russia on March 5, 2020, achieved stability as the longest period in which Syria relatively experienced a kind of stagnant conflict among local actors. This stability, which continued for 22 months by the end of December, 2021, during which the points of influence on the map remained intact. The three areas represent that under the control of the Syrian opposition factions, the Syrian Democratic Forces (SDF) and the Syrian regime.
According to the map of military points published by the Jusoor Center for Studies in cooperation with the InformaGENE Platform for Data Analysis and Visualization, the areas controlled by the conflicting parties on the ground are as follows:
— The opposition factions have control over (10.98%) of the Syrian geography, as the areas they hold are distributed in Idlib and northern Aleppo, in the Tal Abyad and Ras al-Ain areas, in Raqqa and al-Hasakah, and in the Zakaf and Al-Tanf area (55-km de-confliction zone) in southeastern Syria.
— The Assad regime has control over re-captured areas that come to (63.38%) of the Syrian geography, which encompasses the governorates of the coastal region of the country, central and southern Syria, and part of the eastern governorates and Aleppo. In addition, the regime forces extended their control over Daraa after stepping up its military operations against that governorate in July 2021 which was concluded in the format of reconciliation with the people of Daraa. The regime’s control over As-Suwayda governorate in the south; however, remains fragile and limited to tightening the grip of its security branches and state institutions without subjecting the governorate to a military invasion as in other areas.
— The Syrian Democratic Forces "SDF", in contrast control over with: (25.64%) of the Syrian geography, which is the same percentage recorded since November 2019, and includes large parts of the Deir ez-Zor governorate, Raqqa, al-Hasakah, and parts of the Aleppo governorate.
Accordingly, it has been possible to differentiate between the areas of SDF control according to the spread of the military bases of either the US-led International Coalition or the Russian forces. The military bases of the Russian forces are spread mainly in the areas from which the International Coalition forces withdrew, in addition to their main base at Qamishli Airport.
• Of course, ISIS has no longer had any military control over the Syrian territory since February 2019. However, the end of the organization’s military control does not negate the group cells' resurgence to launch alleged attacks against the regime and its allies' forces (the Russians and Iranians), especially in the Syrian Badia area. The organization’s moves are monitored launching military operations in the areas of Al-Saen, Jabal Al-Bishri, Khanasser and al-Sukhnah, in the vicinity of Palmyra city, and in the southern countryside of Deir ez-Zor governorate, in addition to some operations in the SDF-controlled areas east of the Euphrates.
Actually, the lack of change in the areas of control is due to the commitment of the regime and the opposition factions to a cease-fire under the Moscow memorandum that was signed by both Turkey and Russia on March 5, 2020, despite the extensive violations witnessed by this memorandum along the front lines in Idlib and of Tal Rifaat in the northern countryside of Aleppo, as well as the continuing tension on the fighting fronts in Ain Issa of Raqqa.
Meanwhile, the region of Idlib, specifically south of the M4 international highway, experienced a Russian escalation from March 2021 until the end of April 2021. Since that time, the Idlib region has not witnessed a strong escalation as before, especially in attempts to infiltrate and direct ground clashes, with continued artillery shelling and raids by warplanes and drones in the region. The northeastern front lines of Syria, in contrast, witnessed in mid-August 2021, specifically in the Ain Issa region, a major escalation that was carried out by the Turkish-backed opposition factions against the SDF groups.
All in all, it is likely that the local forces will maintain the areas they have control over within the Syrian geography due to the international push for more stability. Moreover, freezing the conflict can also reflect the regional parties' unwillingness and the lack of consensus on how to get changes in the areas of control map, pending moves in the faltering political process so far. 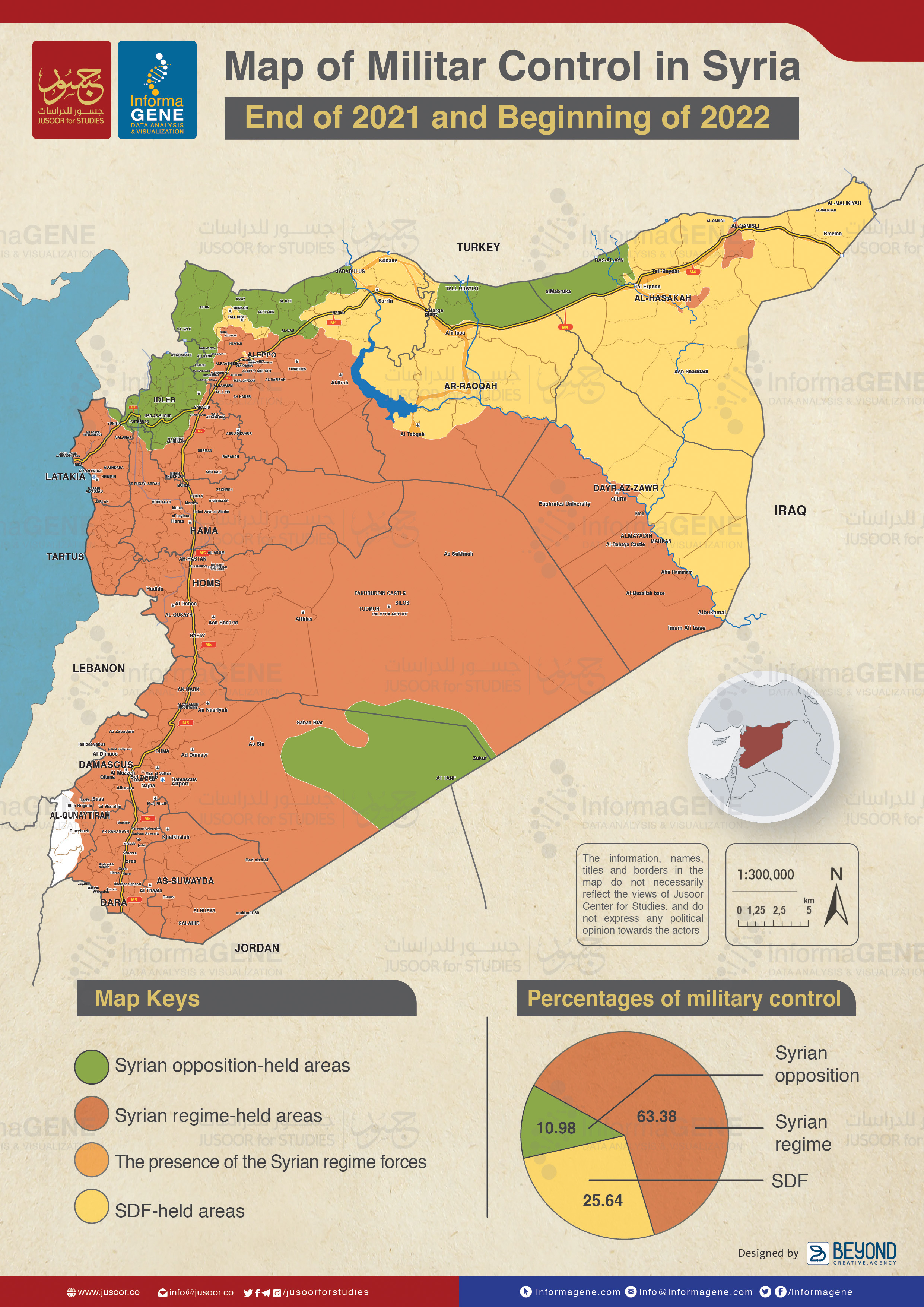