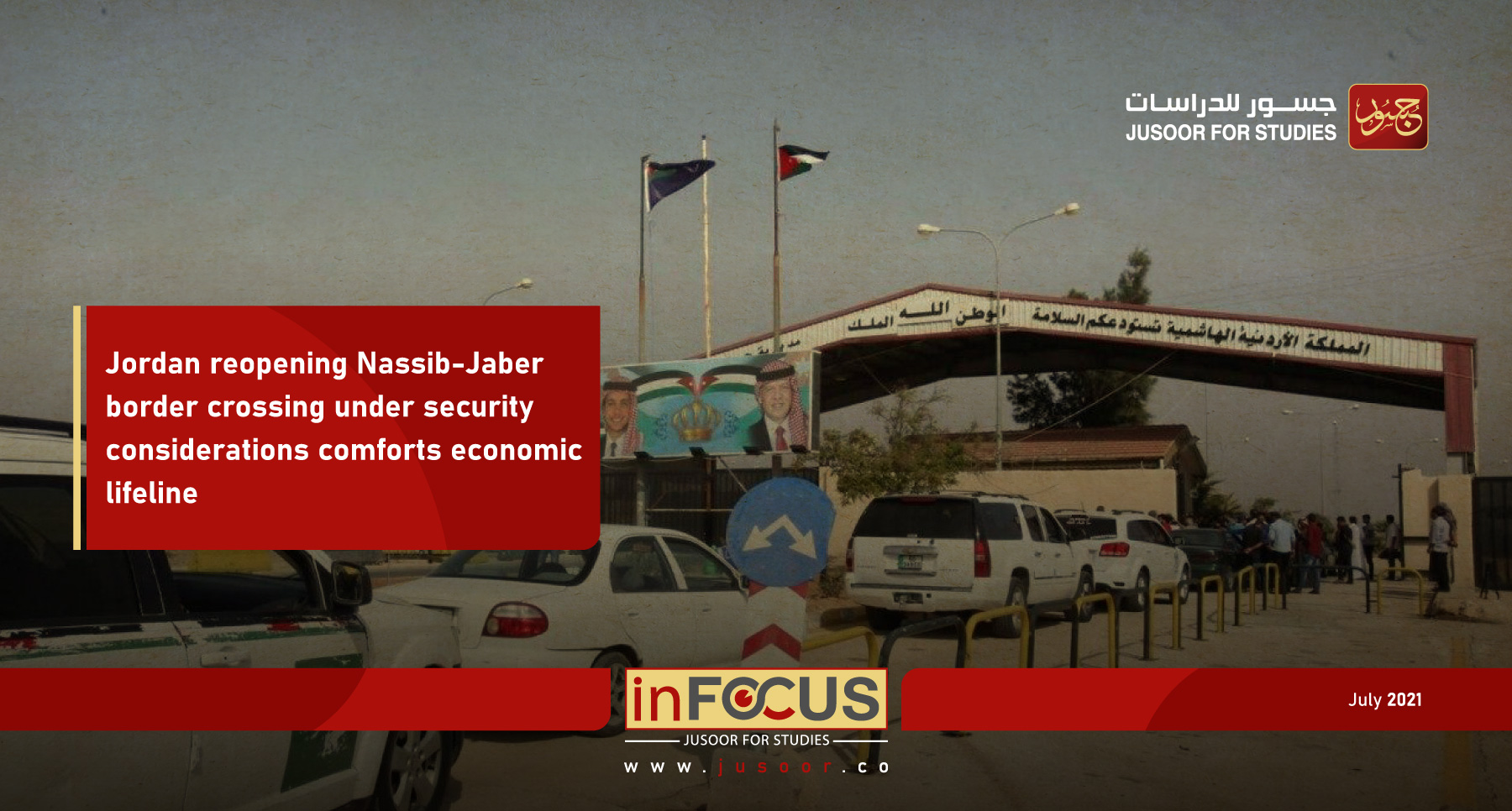 Frequently, Jordan's policy-makers have been issuing decisions relating to the "Nasib-Jaber" border crossing with Syria over the past years, either to open or close it. The last chapter of these decisions was the announcement on July 27, when the Jordanian Interior Minister Mazen Al-Faraya said in a statement that "after carrying out full preparations on the ground with the Syrian side, full operation of the Jaber border center will begin on the morning of Sunday 1st August".

In truth, Jordan has gradually scaled down the volume of trade with Syria in general, as the imports from Syria were about $152 million in 2014, then it decreased to $66 million in 2017 and less than $42 million in 2019.

The Jordanian approach has been based on keeping itself away from troubles could be brought about by dealings with Syria, most notably drug smuggling operations, which started after less than a week of running the crossing’s operations as the Jordanian customs seized several shipments of drugs coming from Syria.

In fact, drug smuggling is not the only thing that could worry the Jordanian authorities, the entry of Jordanians into Syria and arresting of some of them, also remains a source of concern for the Kingdom government.

However, one can notice that the announcement of the opening of the crossing came in a statement by the Jordanian Minister of Interior in a phone call with his counterpart in the government of the Syrian regime, and not by an official in the Ministry of Trade entrusted with operating the crossings, which suggests that the new agreement comes within the framework of security agreements to control the “Jordanian-Syrian borders, which became available paths for smuggling operations.

For instance, in July 2021 five shipments of drug were seized while they were on the way in a smuggling attempt across the borders and not through the crossing center. In May, witnessed the seizure of four smuggling shipments too. The work to open the crossing comes in order to control the "Syrian-Jordanian" border areas and reduce smuggling operations.

Jordan is trying to find out an approach to deal with the Syrian regime depending on controlling the borders and mitigating the unprecedented breaches across the boundary separating Syria and Jordan for purely security reasons.

It is unlikely the Syrian regime to be able to control its border areas with Jordan, because most of these areas controlled by parties that do not originally follow the orders of the regime itself, headed by the Iranian Revolutionary Guard Corps (IRGC), Hezbollah and other militias affiliated with Iran. Such groups seek to enhance their resources through drug smuggling, especially “Captagon”, and also seek to use narcotic pills to influence Jordan and the Gulf states, and use these Drugs as bargaining chips with these countries.