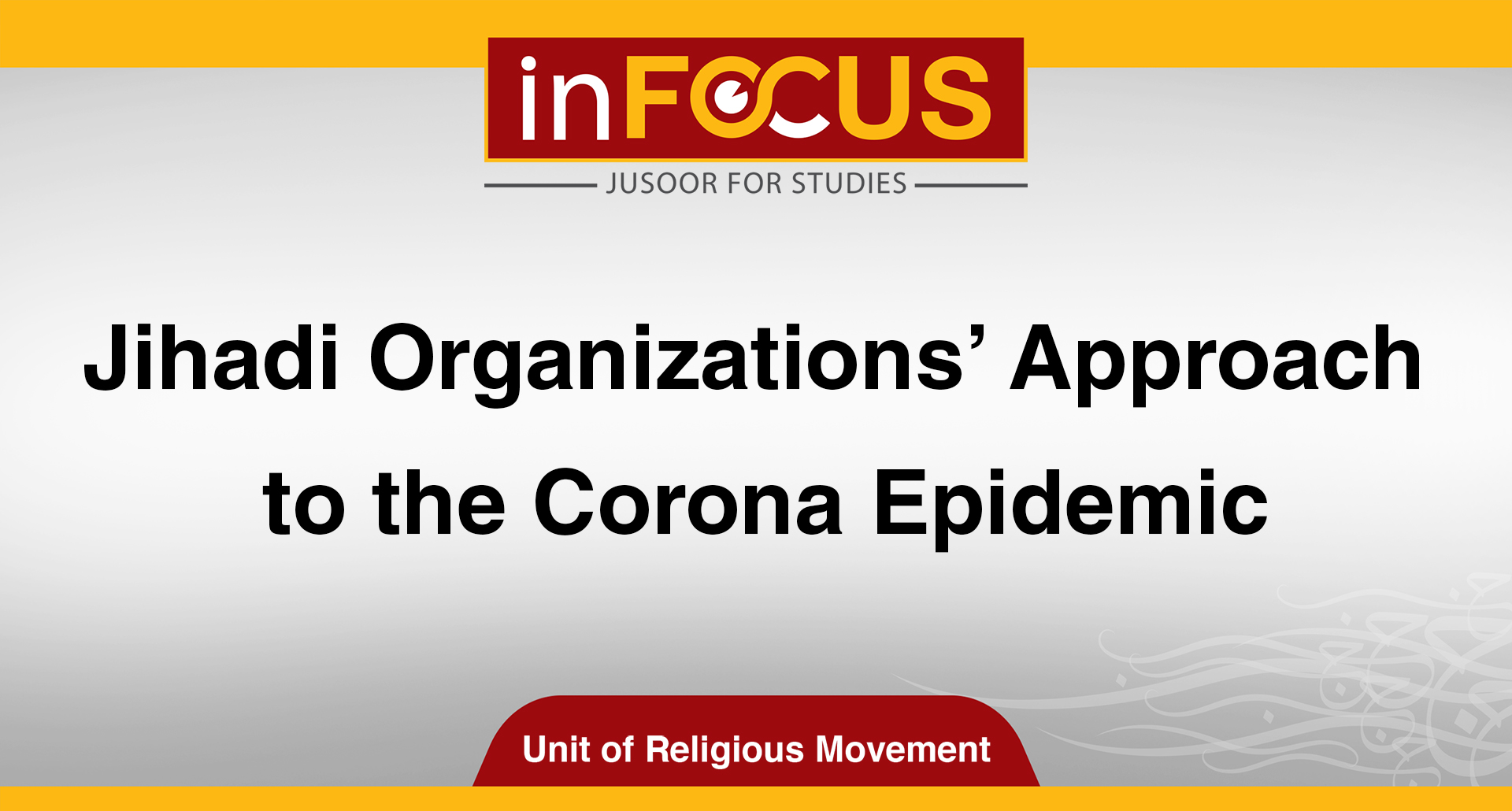 94
In focus| Jihadi Organizations’ Approach to the Corona Epidemic
The Corona pandemic is spreading to areas such as Iraq, Syria, Egypt and Nigeria where ISIS is active as well as areas with active al-Qaeda branches including Syria, Yemen and Somalia where many Corona cases have been recorded.
Despite recording cases of Corona virus, ISIS activities in Iraq have increased, significant ISIS activity was documented in Syria in March and the pro-al-Qaeda Youth Movement in Somalia increased their activities. This indicates that these organizations have not been affected - until now – by the pandemic, but rather have adopted a seize the opportunity approach and taken advantage of the spread of the virus.
ISIS and al-Qaeda statements concerning the Corona pandemic agree that it is a calamity from God and people must repent and stop committing sins for it to lift. However, ISIS still hastened to issue detailed instructions for its fighters on dealing with pandemics, which indicates that its approach was procedural, as demonstrated in the following:
1. In the weekly al-Nabaa 223rd issue 223, the ISIS media office published an article entitled, “Those that you call upon vanish, except for Him” which focuses on the spread of the epidemic in Qom in Iran and the role of the Shi’ite “polytheistic” actions in shrines in spreading the virus; the article argues that the virus is a punishment from God for their actions.
2. In the 225th issue of the same newspaper, ISIS allocated the last page to providing practical advice and Sharia guidance on how to deal with the epidemic. The most prominent guidance was to prevent infected persons from mixing with others, and to refrain from entering areas where the pandemic has spread.
3. In the 226th and 227th, the organization demanded that Muslims work to strike the Crusader states, and take advantage of the opportunity of the anticipated economic collapse and increase their crisis by targeting facilities and working to free detainees from their prisons. The organization also asserted that the pandemic is a soldier of God sent to attack His enemies.
On the other hand, the al-Qaeda leadership delayed announcing their approach to the pandemic. On March 31, 2020, As-Sahab Foundation issued a lengthy statement entitled, “The Way for Humanity to Exit the Whale’s Belly” outlining the following:
1. The American economy will collapse soon. The American administration’s emergency capital infusion to support the economy and its total losses have exceeded its total expenditures on its wars with the Islamic world.
2. It confirmed that the pandemic has reached the Muslim world because of the sins of Muslims and their failure to support the oppressed in Syria and other countries.
3. It called on Muslims to repent and distribute money to the poor who have been affected by this pandemic and invited non-Muslims to enter Islam as a religion of intuition and cleanliness before they die as believers in another religion.
ISIS and al-Qaeda’s approaches to the epidemic are theoretically close, but the al-Qaeda leadership prefers to adopt Dawaa work in explaining the effects of the Corona virus, while ISIS focuses on military action and calls for it to use the spread of the Corona virus.
Unit of Religious Movement - Jusoor for Studies
To visit the English Telegram channel: Click here