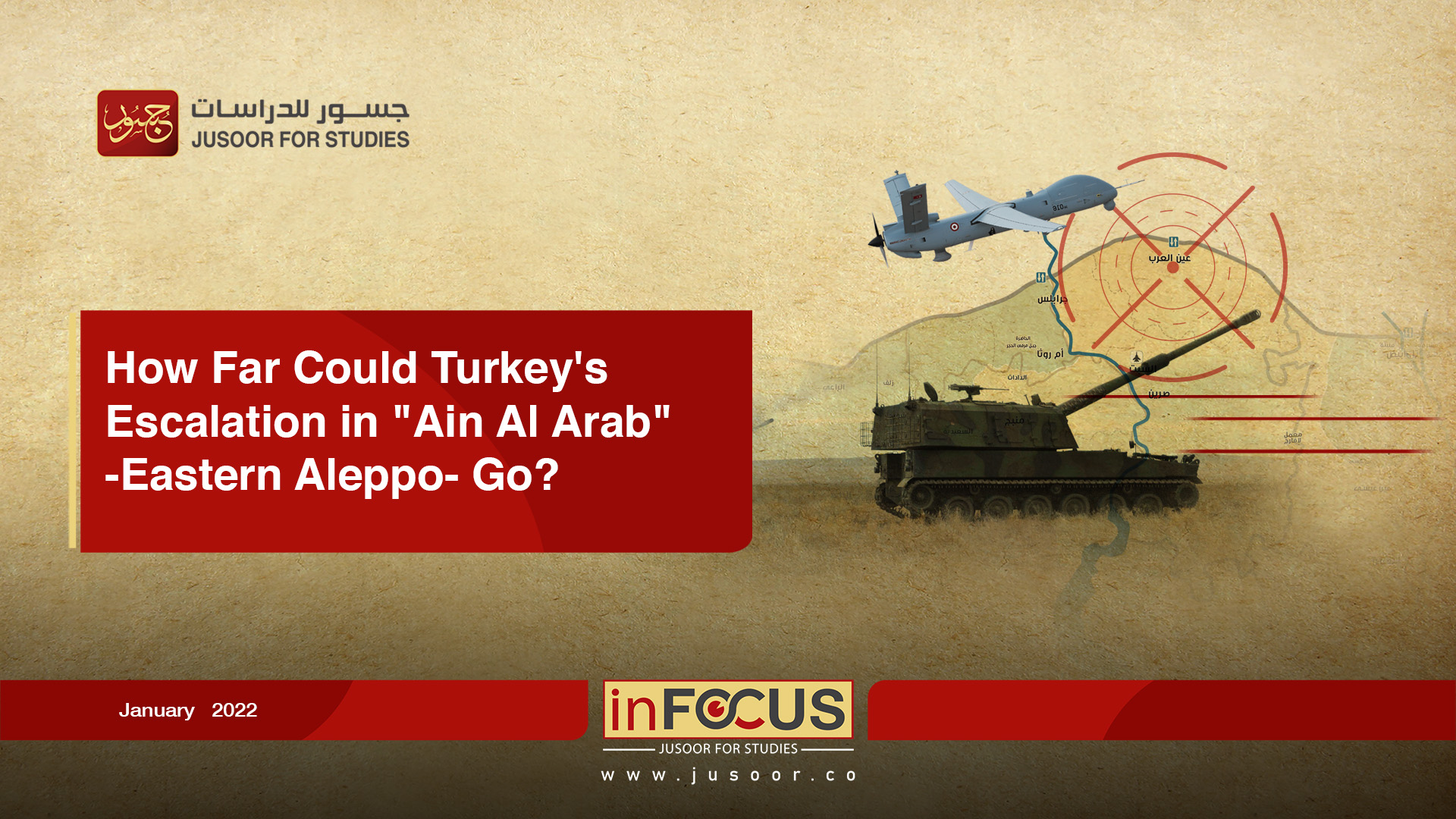 In an unprecedented manner, Turkey escalated its aerial and artillery bombardment on the "Ain al-Arab" district, east of Aleppo, on Saturday, January 8, 2022; as drones and artillery targeted 13 separate sites along the border strip extending between the “Ain al-Arab" and "Tal Abyad" districts, to the east of the
Euphrates.

It is noted, however, that all the sites targeted by the bombing are within the normal route of joint Turkish and Russian military patrols. Although the "Ain al-Arab" district witnessed the conduct of the largest number of joint patrols between the two parties at a rate of more than 80 times, it did not lead to undermining the military and security activities against Turkey from there.

It is clear that the “Kurdistan Workers Party” is still using this area as an operation base to launch attacks targeting Turkish forces inside Turkey and within Syria as well. Hours before the Turkish escalation campaign in the region, the "PKK" organization had targeted a military vehicle carrying a group of soldiers as it passed near the "Gültepe" police station on the opposite side of the "Spring of Peace" area north of Raqqa, which led to the killing of 3 soldiers and wounding others.

Previously, the "Karkamish" province in southern Turkey was bombarded with 5 mortar shells on October 11.  It is noted that the PKK used the village of "Zor Maghar", which is the last point in one of the two joint Russian-Turkish patrol route within the "Ain al-Arab" area.

It seems that the Revolutionary Youth Movement- a militant youth wing of (PKK)- is very active in this region. Turkey has targeted one of its military headquarters in the "Ain al-Arab" district on December 25, 2021. Only two days later, members of the same movement intercepted a joint patrol while crossing in the villages of "Qarah Mogh" and "Ain al-Bat" by throwing stones at the vehicles. As a result, the two sides cancelled a joint planned patrol in the area after a recommendation from the Russian forces. The reason was said to be a potential security threat in 4 villages located within the patrol route.

The foregoing means that Turkey’s air and artillery escalation does not come only as a response to targeting its soldiers from the direction of “Ain al-Arab”, but to the high level of threat that the activity of the Kurdistan Workers’ Party (PKK) has posed against it. In Turkey’s view, this calls for a military response and not just relying on joint action mechanisms with Russia under the terms of the “Sochi Memo" of (2019).

It can also be said that Turkey wants to confirm that it has the ability to use the military option to protect and guarantee its security interests in the east of the Euphrates, if Russia, in turn, insists on using the same option in the west of the Euphrates. Consequently, diplomatic channels should not be bypassed for settling disputes; nor there should be resorting to imposing priorities.

Turkish continued escalation in the region- including threatening to launch a military operation- is expected. The goal is to get Russia to adhere to the responsibility of implementing what was agreed upon concerning vacating the PKK from the region, safeguarding joint patrols, securing their routes, and dealing with any security threat facing them; and not limiting their work to monitoring and alerting.