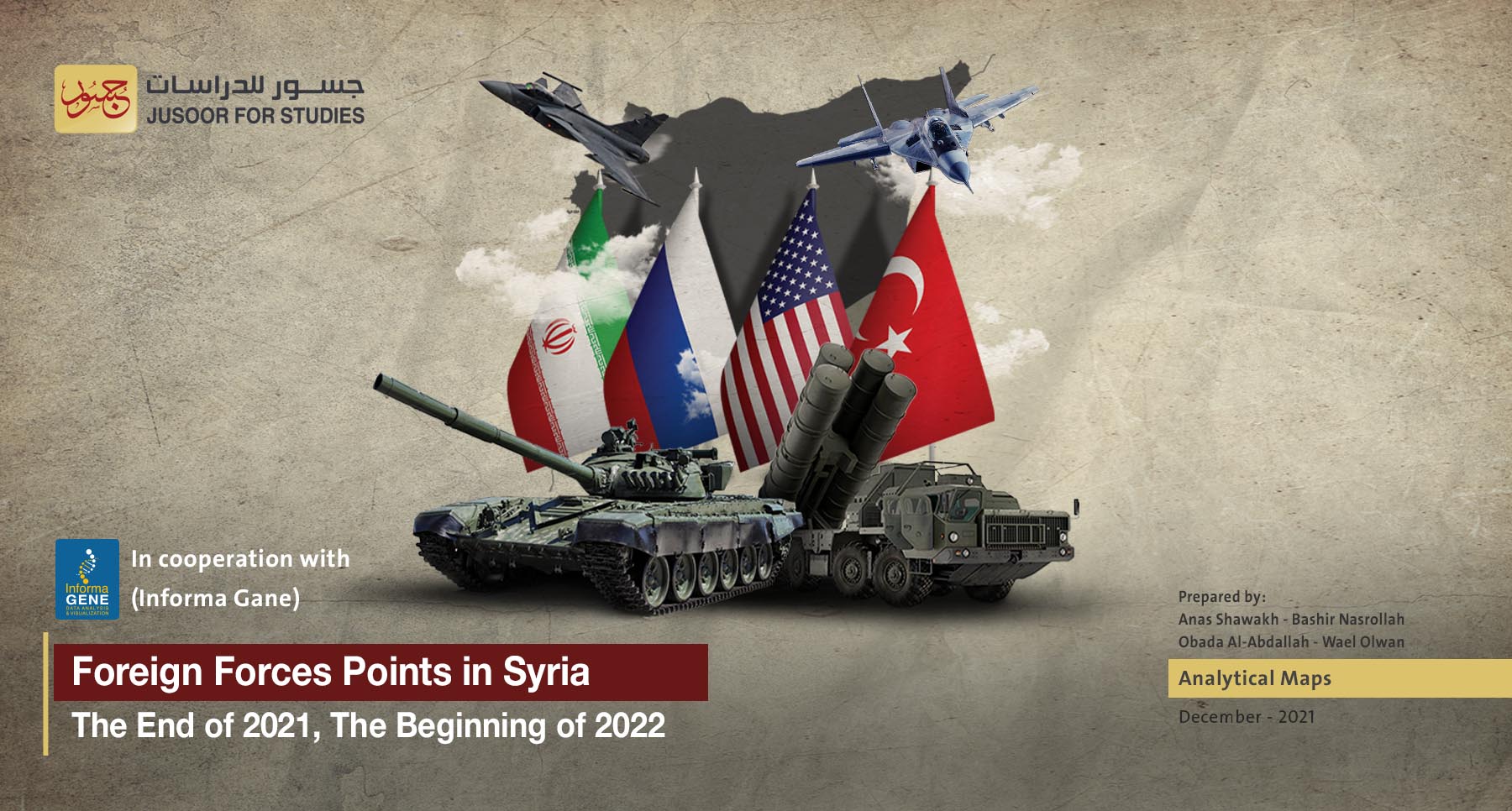 Jusoor Center for Studies, in cooperation with the InformaGENE Platform for Data Analysis and Visualization, publishes analytical maps on the security and military points of the various external powers directly intervening militarily in Syria. By the beginning of 2022 the number of foreign security and military sites, bases and posts, reached nearly 600 ones. This figure, in fact, reflects the large influence the external parties have in the Syrian file, at the expense of the weak internal influence of all local actors.
The map includes the security and military positions of the US-led International Coalition, Turkey, Russia, and Iran, including detailing the Iranian points whether housing the Iranian Revolutionary Guards Corps (IRGC), the Lebanese Hezbollah or joint points run by the two sides.
Jusoor Center for Studies, in cooperation with the InformaGENE Platform for Data Analysis and Visualization, strives to develop the map of the foreign forces’ sites in Syria. So that, this version has the recent updates in comparison with the previous ones were published in early 2021, then mid-2021, as part of a continuous monitoring process for all changes that occurred in these sites and the nature of the forces deployed within, exploring their numbers, equipment and the tasks they have.
It is noted in the new version of the map of foreign forces locations in Syria that there are developments in the number of bases and points of all forces without exception. Apparently, the presence of the US-led International Coalition declined, whereas the Turkish presence relatively increased a little bit. The Russian presence, on the other hand, increased to a greater extent. As for the Iranian presence, it had the largest share of the increased numbers of sites during 2021.
Until the beginning of 2022, the number of foreign military, security and operational bases in Syria reached 138, and the number of military, security, providing logistics points, and outposts was 459.
The points of the external actors are as follows:
- The US-Led International Coalition forces (28)
- Turkish forces (122)
- Russian forces (114)
- Iranian forces (333)
The map of Iranian points indicates 186 sites of the IRGC, 80 sites of the Lebanese Hezbollah, and 67 joint sites housing the two sides.
With a number of up to 155 military sites, the governorate of Aleppo is the house of the largest number of military sites for foreign forces in Syria, followed by Damascus and Damascus countryside with 78 sites, Idlib 76, Homs 51, Deir ez-Zor 46, and Hama 43, Al-Hasakah 38, Raqqa 32, Daraa 26, Quneitra 21, As-Suwayda 17, Lattakia 13, and Tartous with only one site.
The "Jusoor Center" in cooperation with the InformaGENE Platform also presents with these maps some infographics, analytical reports of the nature and objectives of the foreign military presence in Syria. This, in fact, can provide researchers, experts and decision makers investigating the Syrian issue with a clearer picture of the complicated and intertwined Syrian situation in order to reach a greater understanding of the opportunities for influence or future change in this situation along with the real actors and tools. 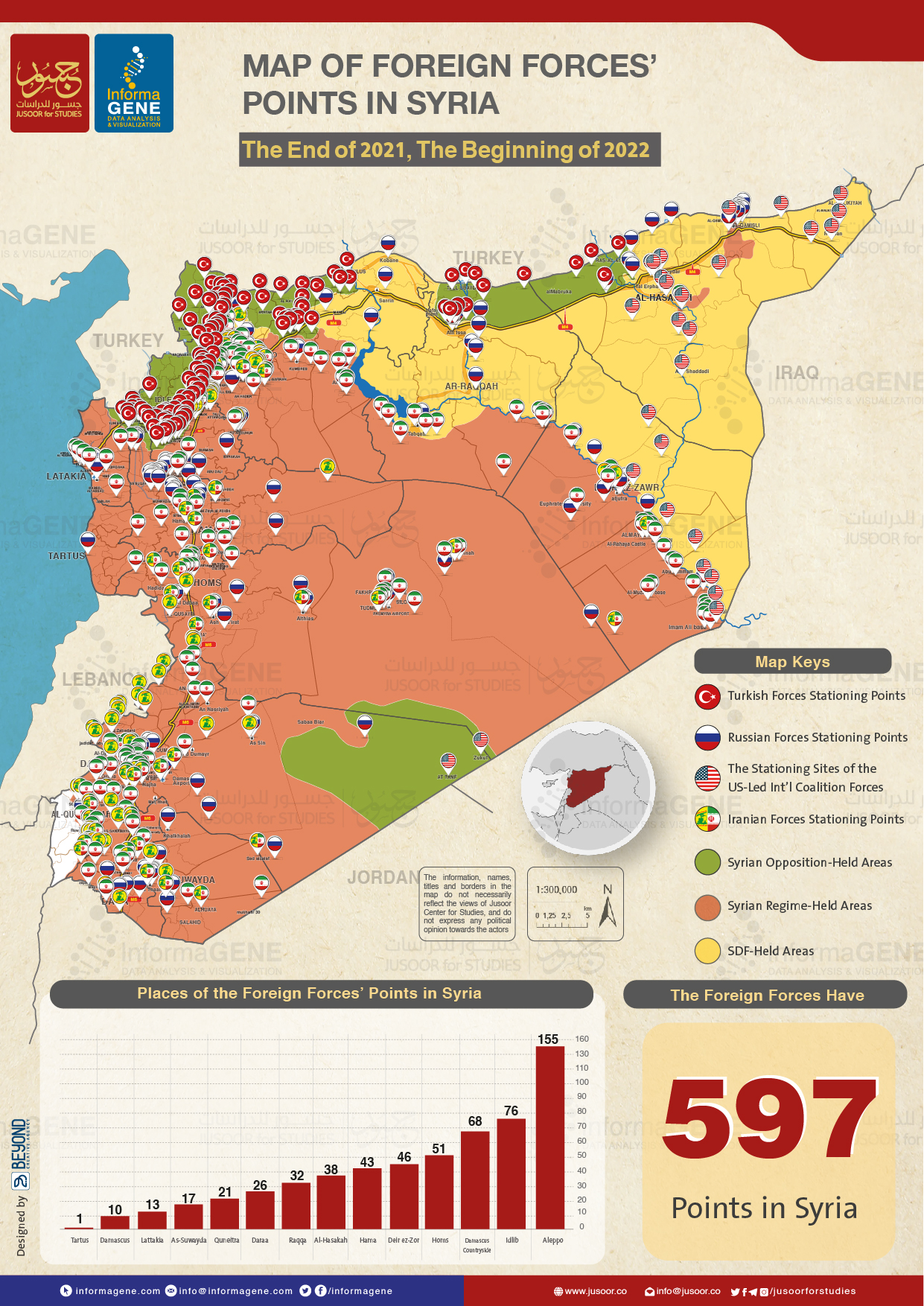 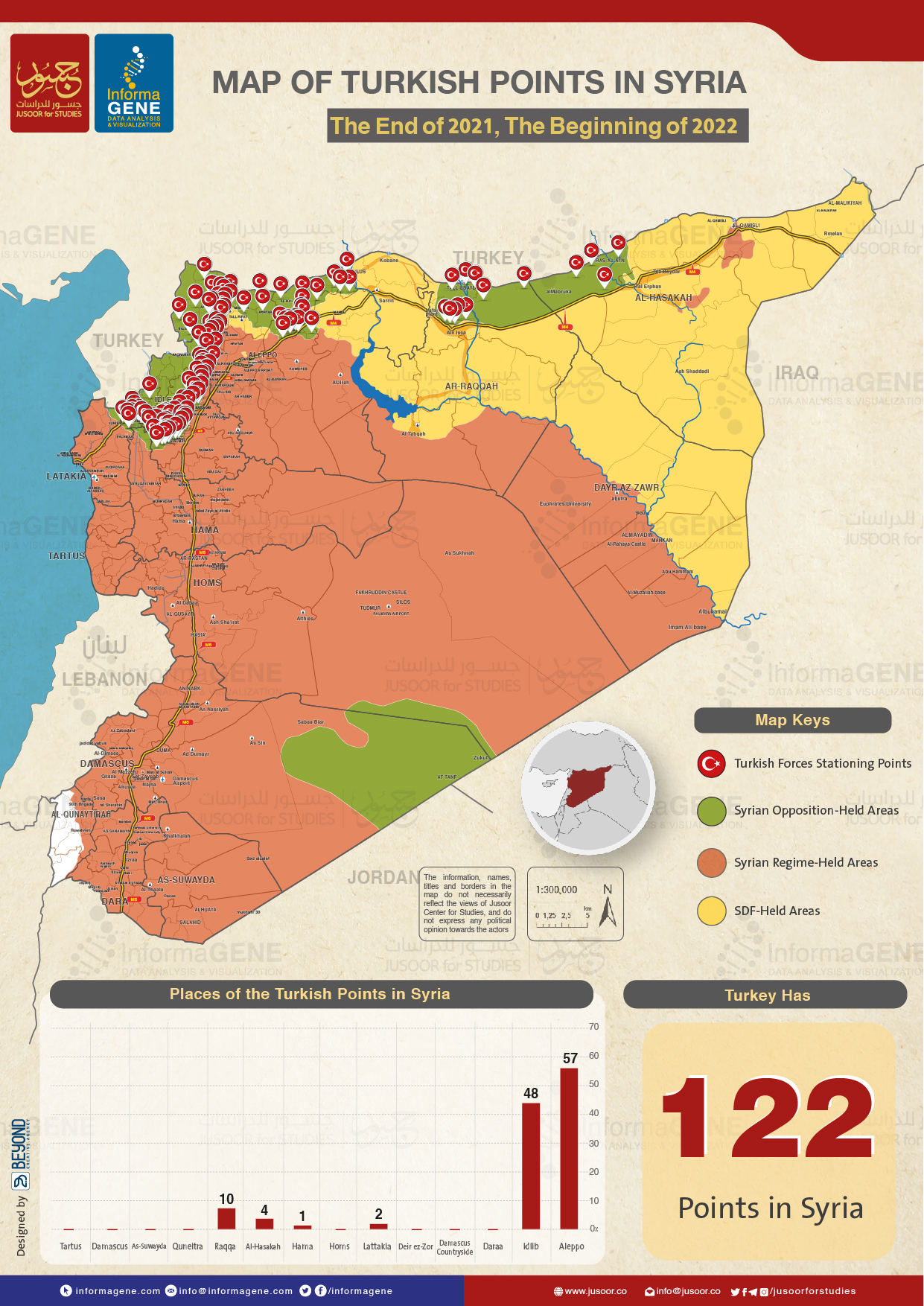 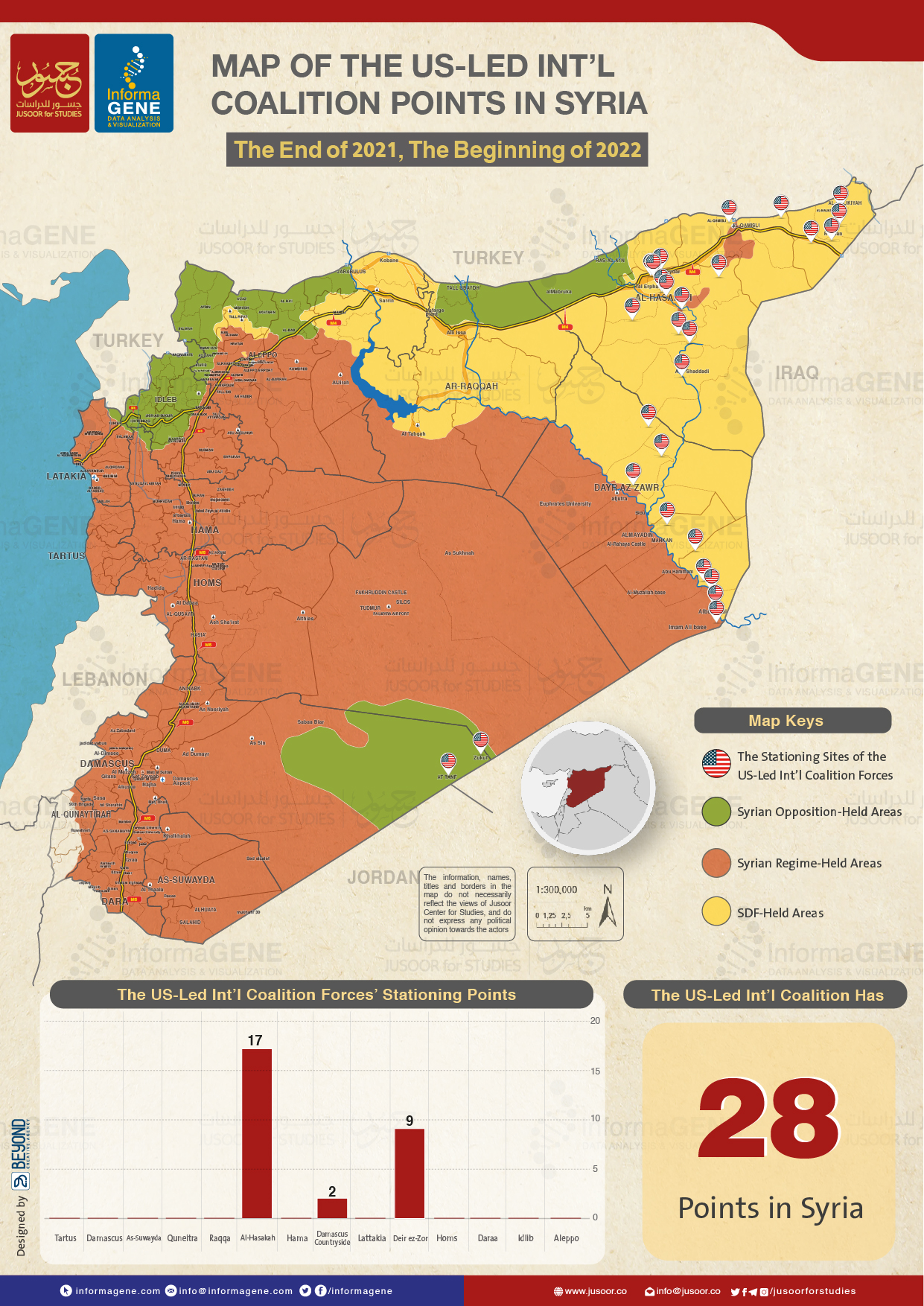 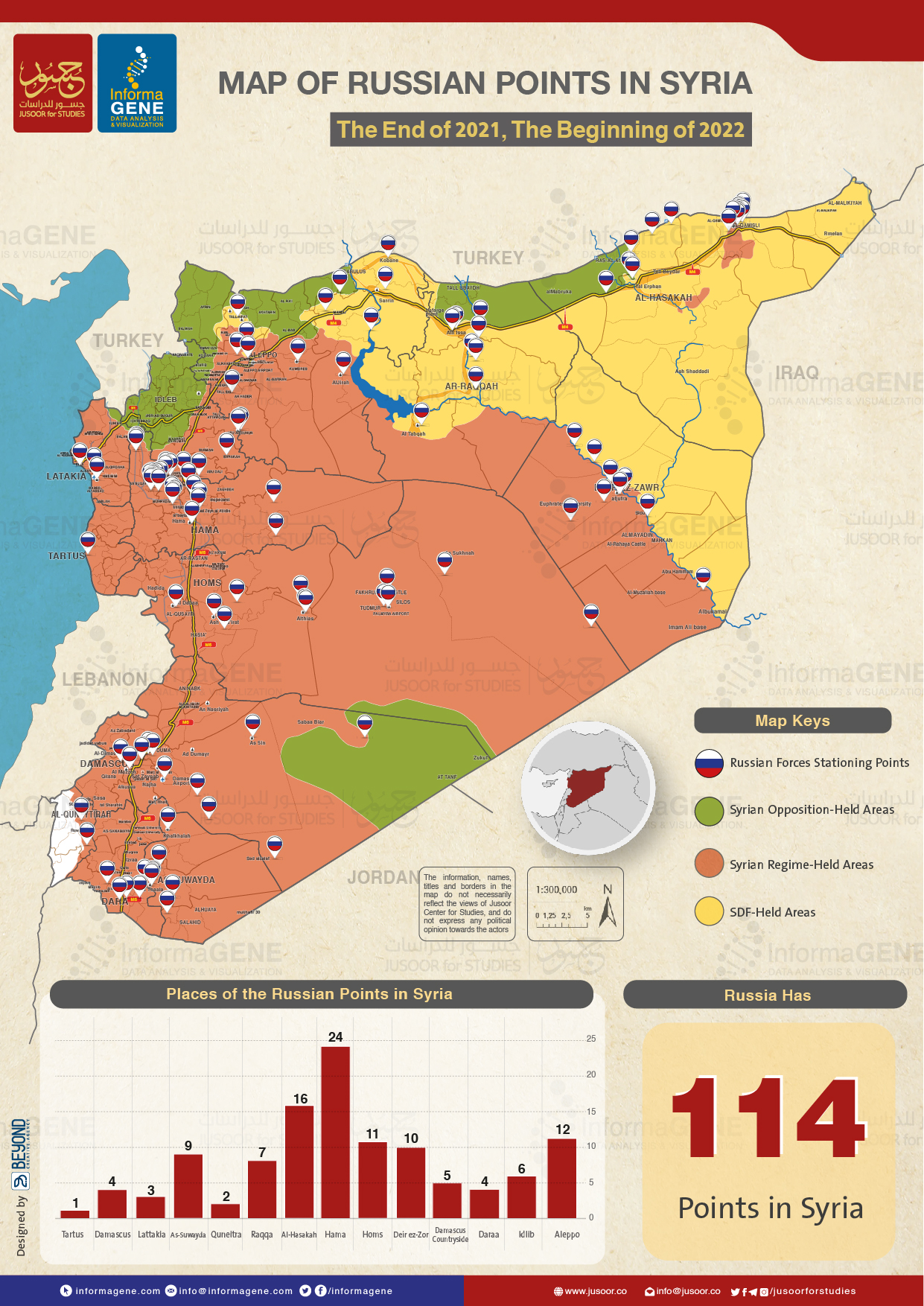 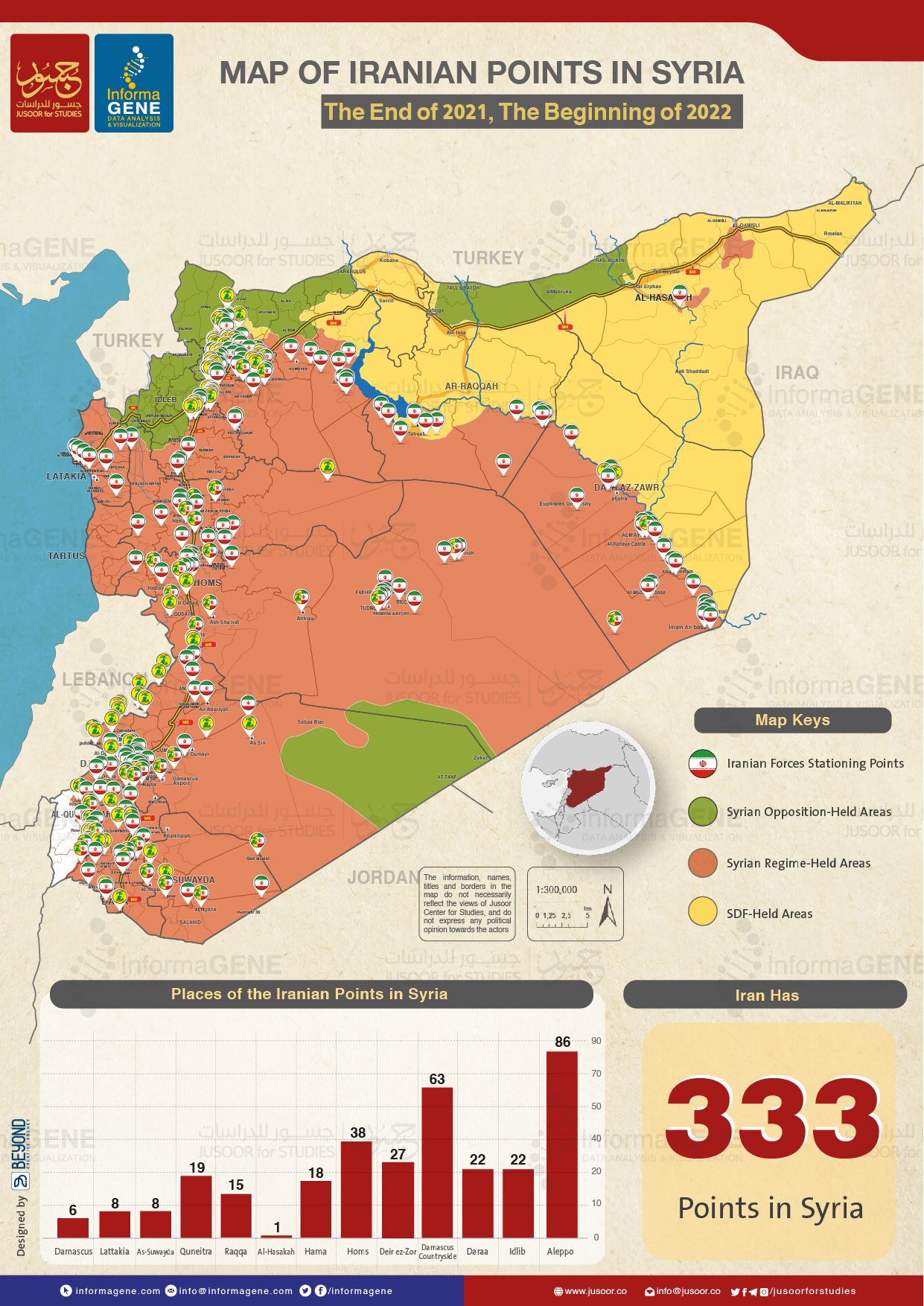