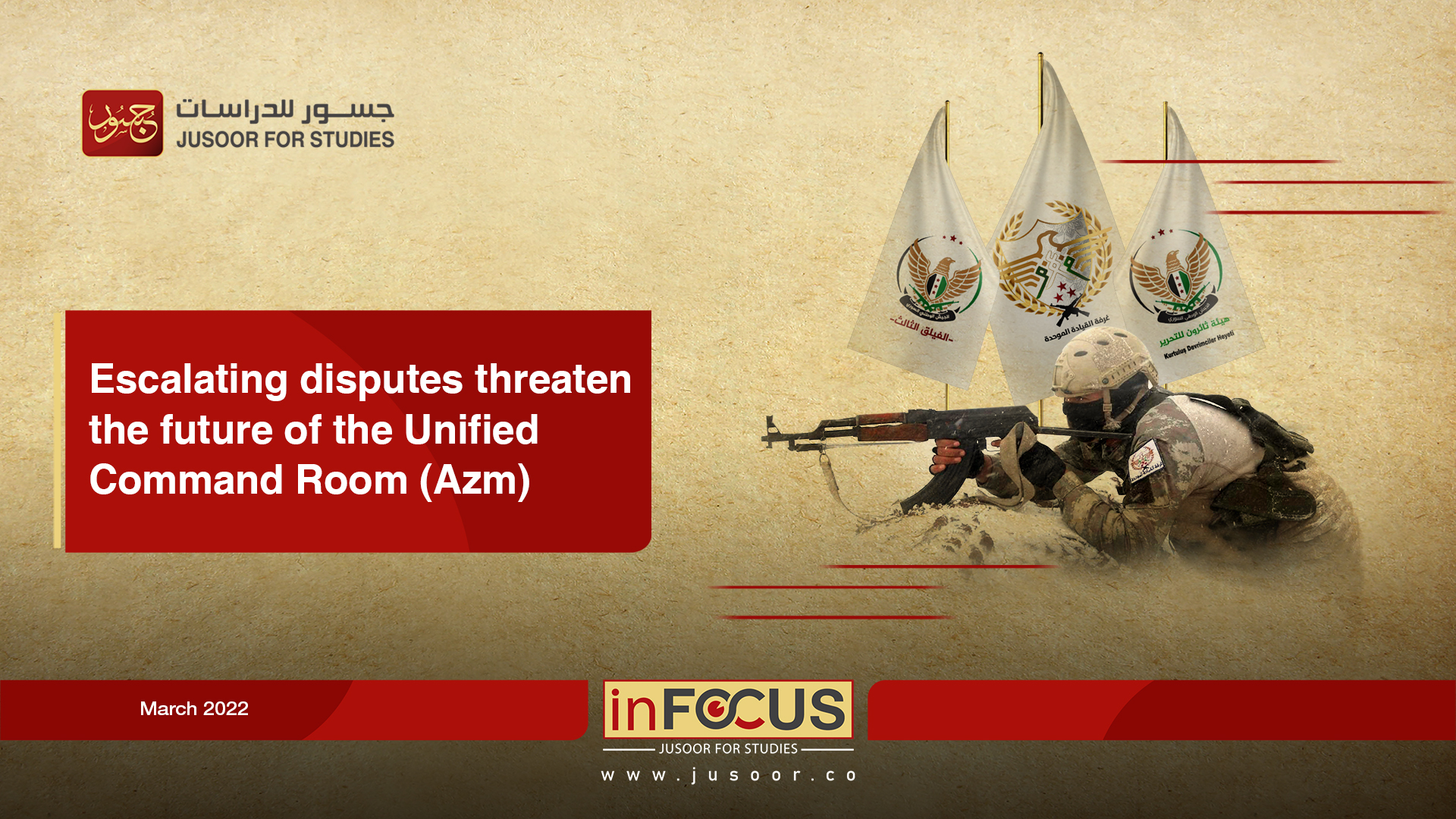 The Unified Command Room (Azm), operating in northwestern Syria, ended in a stalemate; As a result of growing differences between its factions related to the economic and administrative aspects, which may pose a real threat to the Room's future, after the significant gains that have been achieved at the security level during 7 months of actual active work, which are summarized as follows:

• The decrease in the pace of infighting between the factions of the Syrian National Army, after raising the level of coordination between prominent factions within Azm, which contributed to the use of security and military solutions with undisciplined groups, which over the past years had caused tensions and clashes between the factions or with the military police.

• A noticeable decrease in the abuses committed by the armed members, after the military judiciary figured out that some of the active factions within Azm can form an executive force capable of strengthening the authority of the judiciary in following up arrest warrants and detention orders against wanted persons.

• A significant increase in anti-drug operations, as Azm factions carried out 3 campaigns against drug traffickers and dealers in northern Aleppo, which resulted in the arrest of many of them and the dismantling of two Captagon factories.
Recently, some disagreements began to appear in the relationship that brings the components of (Azm) together on two levels, namely, the economic and administrative levels, as shown below:

1. Economically: The components of Azm, specifically the “Third Corps” and the “Revolutionaries for Liberation”, were unable to resolve disputes about the mechanism of work of the commercial crossings, and the resulting financial return, which was reflected in the project of establishing a body emanating from the Unified Command Room; whose aim is to control the roads and combat smuggling, so the project was suspended on the grounds that the work of the security room had almost stopped.

Because of the economic disputes, the Revolutionaries for Liberation tended to communicate with Hayat Tahrır Al-Sham (HTS), with the aim of discussing commercial and security cooperation between the regions of Idlib and northern Aleppo, which is an indication of the depth of the differences within Azm.
2. Administratively: Azm, by the way, has not been able, since its inception, to put a clear definition of the relationship with the institutions emanating from the Syrian Interim Government, which prompted official figures and some factions to oppose the room’s activity. Although it was originally represented by the body of the revolutionaries. The foregoing also reflects a major organizational imbalance among the components of the Unified Command Room.
In general, if the unified leadership model as in (Azm) is undermined without presenting an alternative or reforming the system of governance as a whole, the region will be threatened with losing the security gains that have been achieved during the past period, in addition to the possibility of compromising key economic opportunities.
This would take place in conjunction with high expectations suggest that the United States of America tends to grant exemptions to the regions of northeastern and northwestern Syria from the Caesar Act sanctions, which may provide a legal environment to attract capital and investors, which also needs an appropriate security environment.