Daraa's ongoing confrontation lines in light of the political facts 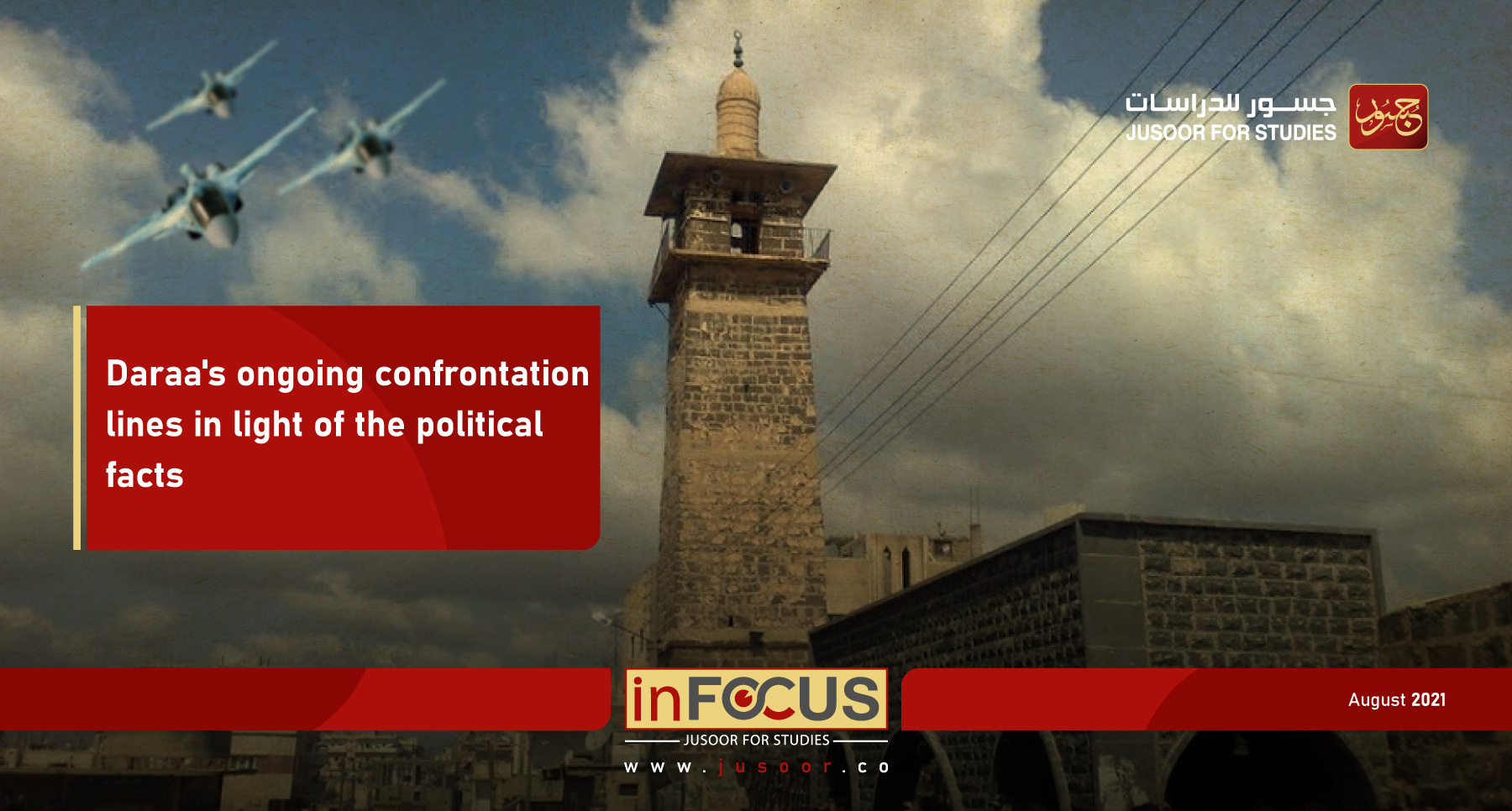 Daraa's ongoing confrontation lines in light of the political facts

On the 29th of July 2021, large-scale confrontations erupted in the governorate of Daraa, southwestern Syria, as fighters of the Syrian opposition factions, those who signed the 2018 reconciliation settlement, clashed with Syrian regime-affiliated and Iranian-backed forces. These clashes included “Daraa al-Balad”, southern district of Daraa city, in addition to villages and towns in the northern and western countryside of the governorate.

Shortly afterwards, the fighters of the opposition factions were able to seize control of several military posts and checkpoints in: Saida, (pronounced as Sayda)- Tasil - Tafas - Nawa - Nimer - Umm al-Mayadin.

This development came aftermath the failure of the negotiating round between the Central Negotiations Committee, acts as an intermediary for civilians of “Daraa al-Balad” district, and the commander of the Syrian regime's security cell responsible for the area, Major General “Hussam Louka”, where the Syrian regime wants to impose hard conditions related to handing over weapons and limiting arms spread in the neighborhoods of Daraa in the hands of its own security forces, and to deploy military and security posts across the region.

Russia, obviously, is leading these movements from behind, and is using Iranian-backed forces to pressure the local population in Daraa, to amend the terms of the settlement that was signed in 2018, especially the item related to the small individual weapons, as the agreement allowed the light weapons to remain in the hands of the fighters of the opposition factions, and only heavy and anti-armor weapons to be withdrawn

However, it is clear that Russia is dissatisfied with the intensity of the recent political movement in Daraa against the Syrian regime, which peaked in May 2021, and was represented by the rejection of the presidential election, and all this was done under the protection of fighters who possess individual weapons, and Moscow is likely to be afraid of international movements led by the United States to activate the support of the Syrian opposition again in the south, as it is possible for Washington to work on the idea of putting pressures on Iran and restrict its influence in Syria in order to force it to negotiate, and the south of Syria will be a significant gateway to that.

Moscow has been unable to use its air force over the past few days against the fighters who managed to force the Syrian regime forces and Iranian-backed groups to withdraw from many points. This can be seen in light of Russia's unwillingness to bother Jordan with a new humanitarian crisis, as long as Amman demonstrates flexibility towards the Russian position, and Moscow does not want to disturb Israel or influence the joint coordination with it on the Syrian file.
Under such facts, talking about a possible defeat for the Syrian regime due to the absence of Russian aircraft seems to be an exaggeration, given that the opposition fighters have no real military support. On the other hand, talking about an easy battle for the regime seems empty rhetoric, despite the weapons owned by the opposition fighters are relatively poor tools, but they make advantage of their own positions and locations. Besides, the fighters of the opposition factions are fighting one final battle, as they realize that accepting the idea of handing over weapons will have disastrous impacts on the members of these factions in general, and on the situation of Daraa in general. They are also aware of the international balances in the region, and the limits of the available Russian moves.

Accordingly, it is likely that a new settlement agreement might be concluded in which the Eighth Brigade of the Fifth Corps (Ahmed al-Awda-led faction) will play a key role, as one of the possible clauses of any future agreement is that the Eighth Brigade will undertake the process of controlling security in some areas, and deploying military barriers to ensure the restricting of the use of weapons against the Syrian regime forces, while not ruling out the hypothesis of the departure of a group of fighters to the north of Syria in order to ease the position of the regime and deal with its demands on which the regime insists and to reach a truce again.

Ovrall, reaching a settlement after this escalation does not negate that Russian pressure on the various areas of Daraa will be renewed later, because any solution that does not seem like a sufficient guarantee for Moscow that other countries will not attempt to use the arms deployed in southern Syria against the Russian interests will mean nothing for Russia.